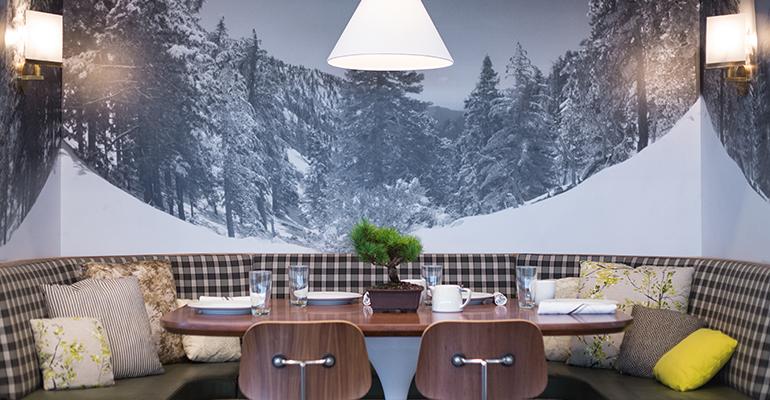 <p>&quot;It has to advance the cause of veganism, and it has to look nice, and the music has to be good.&quot;<em>&mdash;Moby</em></p>
People>Owners

Moby opens restaurant for a cause

It’s not unusual for restaurants to donate some proceeds to a nonprofit group. But it is when all proceeds are donated.

That’s the case with the new restaurant Little Pine, a vegan bistro opened by singer-songwriter Moby in Los Angeles’ Silverlake neighborhood in November.

Moby has pledged that all proceeds from the restaurant will be donated to a mix of animal welfare groups, including The Humane Society of the United States, Mercy for Animal and People for the Ethical Treatment of Animals, or PETA, among others.

That’s assuming the restaurant will have proceeds. Moby owns the art deco building that houses the restaurant, which will help get the concept off to a good start. Meanwhile, the musician says he donated about $500,000 to animal welfare groups last year.

Here’s how Moby describes the concept, which he hopes will win people over to the life of loving animals without eating them.

You’ve said you didn’t mean this restaurant to be a commercial endeavor, but to represent a vegan lifestyle in a positive light. How does Little Pine do that?

Moby: I’ve been a vegan now for 28 years, and what I’ve found is there are many ways of advancing the cause, not just of veganism but animal welfare and animal rights. On one hand, you can yell at people, which I did for a long time. But I find when you yell at people, they just get annoyed and stop listening.

What works quite well instead is providing examples rather than facts. If I can create an environment that has a beautiful design, is architecturally interesting, is in a really great neighborhood and has beautiful food that’s well prepared and satisfying, regardless of how you describe yourself as vegan, vegetarian or omnivore, I feel like that’s more effective than me yelling at people.

How have you seen vegan cuisine evolve in restaurants over the years?

Moby: Twenty-eight years ago, I would go into a vegan restaurant and have a plate of brown rice and overcooked broccoli and I was happy. Now, you can walk into restaurant like Crossroads on a Thursday night and find Bill Clinton and Oprah eating there. The food is thoughtful and beautiful. Even a lot of non-vegan, non-vegetarian restaurants now are very produce-based. I think most chefs these days are way more excited by what they can do with produce than what they can do with a slab of beef.

Who’s the chef at Little Pine?

Moby: The kitchen’s being run by my three sous chefs. (The opening menu was developed by Kristyne Starling.) I find that it’s an interesting approach to food creation, because it’s very collaborative.

Can you describe the menu?

Moby: One of my favorite things we just added is sausage and polenta in a really great romesco marinara sauce.

Are you using fake meat? Or something that approximates meat but is vegan?

Moby: We have cheese and sausage but it’s vegan. In the world of sausage, there’s duck, turkey, beef or pork, so why not vegan sausage? It’s another type of protein. With cheese, there’s goat’s milk, or yak’s milk or sheep’s milk, so why not nut milk cheese?

I think fake meats tend to be much more synthetic, with a lot of chemicals that may not be organic and natural. Little Pine is also 100 percent organic, so when we make vegan sausage it’s the same way you’d make (meat) sausage but with a vegan protein base.

Is this your first restaurant?

Moby: No. I had three restaurants in New York. I opened them a long time ago with an ex-girlfriend and, over time, they proved to be too time consuming and stressful. My last restaurant in New York, which I hadn’t been involved with in 10 years, closed roughly the day that Little Pine opened here.

Los Angeles, and, I’m sure New York, is full of celebrity-backed restaurants but typically those celebrities are not involved. Would you say you’re more hands on?

Moby: The restaurant is structured so I can never make a penny from it, so it’s not like I see it as an investment that I can sit back and make money from. It has to serve my community, the employees, local and organic farmers. It has to advance the cause of veganism, and it has to look nice, and the music has to be good. Everything in it has to be great. And in order for that to be the case, I have to be there every day.