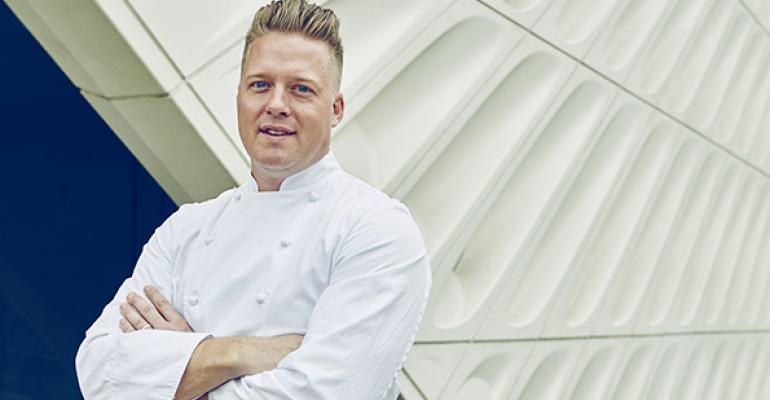 One of the most anticipated restaurant openings in downtown L.A. this year is Otium, a concept from French Laundry alum Tim Hollingsworth.

Hollingsworth has already made a name for himself with the updated take on American barbecue at Barrel & Ashes, which opened last year in L.A.’s Studio City neighborhood, with partners Rory Herrmann and Jeff Sladicka.

Both Otium and Barrel & Ashes also have the backing of multi-concept collaborator Bill Chait, managing partner of Sprout LA, whose group holds a stake in 14 local concepts, including Bestia, Republique, Redbird and Broken Spanish.

Otium, however, is the concept Hollingsworth developed for the complex that includes the long-awaited Broad Museum, a handsome $140 million venue devoted to contemporary art and built by philanthropists Eli and Edythe Broad, which is scheduled to open Sept. 20. Still wrapping up construction, Otium is expected to open in October.

Hollingsworth describes Otium as a “social restaurant” with a sophisticated but rustic open kitchen that merges indoor and outdoor spaces. The name “Otium” in Latin means a place where time can be spent on leisurely social activities.

The goal is to create a place where the rigid formalities of dining will be stripped away, allowing the guest to focus on the quality of food, warm service and a relaxed ambiance. There’s even a movie-like trailer offering a preview by Life & Thyme.

Here’s how Hollingsworth describes his next venture:

Can you describe the menu planned for Otium?

The menu will be eclectic. It will have influences from all over the world. It'll be rooted in my past, but will also be looking towards the future.

Does the museum’s proximity play a role in what the restaurant will become?

Absolutely. Since the origin of the restaurant we really wanted to focus on being a place for the community that both has an impact and also serves a purpose for the neighborhood.

Some have criticized the decision to tuck the restaurant into the museum plaza, rather than placing it more openly on Grand Avenue to create more street life. How do you feel about that and the challenges it might create for the restaurant?

Grand Avenue itself is built on a bridge, and I think the position of the restaurant as it stands will help in our vision to activate the plaza. Having people walking by on Grand Avenue will make it more open and accessible. We want the restaurant to spill out onto the plaza, which will act as a sort of front yard for the space.

How would you describe the downtown Los Angeles restaurant scene and how do you anticipate it will differ from the scene at Barrel & Ashes in Studio City?

Downtown L.A. has a very vibrant restaurant scene. It’s full of a lot of younger people who are very forward-thinking with their dining habits. They don't mind sitting at communal tables or at the bar. They like sharing plates and dishes. Studio City is a much more family-oriented community, and the restaurant scene there accommodates those needs, as opposed to the more urban scene in downtown.

You climbed the ladder earlier in your career at The French Laundry and served on the American team for the Bocuse d’Or in 2009. How have those experiences shaped you as a chef and restaurateur?

All the experience at a young age really helped to shape me and prepare me for what I'm doing now. Through my past experiences, I learned the importance of dedication and perseverance, and that hard work does indeed pay off. I would not be able to do all of this without those early lessons.