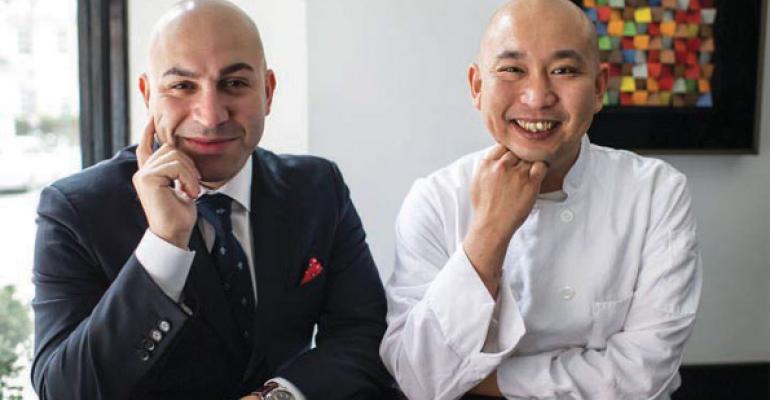 Alex Borgognone has harnessed one chef&rsquo;s passion for a single product into a thriving operation. &bull; See more Owner Interviews

The documentary Jiro Dreams of Sushi explored an exacting sushi master’s painstaking devotion to the finest, purest product, served to the lucky few able to score a seat in his tiny Tokyo seafood temple and willing to pay handsomely for the experience.

Across the globe in New York City, Alex Borgognone saw the movie and vowed to recruit one of Jiro’s star players and launch his own shrine to sushi. Borgognone, who helped run Patricia’s, his family’s restaurant group, tracked down the protégé, Daisuke Nakazawa. Despite the language barrier he convinced the chef to relocate to New York and partner on a small West Village location (35 seats in the dining room, 10 at the counter) that would become Sushi Nakazawa.

So far the gamble has paid off: Four months after it opened, the restaurant earned four stars from New York Times restaurant critic Pete Wells. “No restaurant in town does as much with sushi, and sushi alone, as Nakazawa,” he proclaimed.

It was the way they strove for perfection every day they went to work. They did one thing and did it amazingly.

RH: Was it risky having such a narrow focus, especially in a city with so many great sushi places?

Borgognone: When Daisuke said, “we’re going to do just sushi,” being a restaurateur I thought, “people want options.” But we wanted to be the best in the country at one thing: sushi.

I wouldn’t call other sushi restaurants competition, since they use different techniques. There’s definitely a lot of competition in New York, but we shine because of the attention we pay to the small details. How many sushi restaurants have you been to that smoke, age and pickle their products? And the most important thing is that we use 100 percent sustainable and wild product.

RH: You’re bringing in seaweed from Tokyo Bay, sea urchin from Santa Barbara, shrimp from New Caledonia in the Pacific. How did you build your network of suppliers?

Borgognone: Daisuke is really in charge of sourcing, and he buys the best he can find. The people we deal with know we want the best and make sure we have it. It’s simple: If the product is not great, we send it back. We have our own rice purveyor who imports Japanese rice, we have several purveyors for fish products and someone else to handle fresh wasabi. We try to stay as domestic as we can, since the Japanese way is to find the best product around you.

RH: You located Nakazawa, through Facebook, working in Seattle for another Jiro apprentice. How have you been able to overcome the language barrier?

Borgognone: It was a little difficult at the beginning, since he only spoke a little English. We talked a little by phone, but mainly we used Google Translate and email. When he first arrived in New York he had one of those electronic translators. He has learned how to speak English from watching TV and mingling with people. Now his English is pretty amazing.

What critics had to say

RH: Most articles about Sushi Nakazawa make note of the Western décor and service style. What was behind that choice?

Borgognone: We wanted to think outside the box. We were looking for something clean, sleek; the sushi bar is made out of white Italian marble—simple, comfortable and not pretentious. People who say it’s not your regular Japanese joint are right. We didn’t want it to be.

The most important thing is creating an atmosphere where you will be comfortable, and creating a product that will blow you away. Here, the service is impeccable; at most Japanese restaurants service is rough around the edges.

RH: The other point made in most reviews is the difference in personality between Nakazawa and his mentor, Jiro.

Borgognone: He actually has had two mentors, Jiro and Shiro, who hired him in Seattle. Shiro helped him understand that what Americans really want is a great experience and how their palates differ. The difference between Daisuke and Jiro is that Daisuke is amazingly happy when he comes into work. This is a guy who is really going after his dream. Why shouldn’t he be happy?

RH: How has the New York Times praise affected business, and how do you handle demand?

Borgognone: The demand was always there from day one—we were always busy. The review, hopefully, gave us longevity. I can’t emphasize how much I love Pete Wells. He’s one of the reasons our lives have changed.

We only book 30 days out to give everyone the opportunity to have dinner here. Most reservations are booked online. The sushi bar seats go in 45 seconds, the dining room tables in about five minutes.

RH: From an operations standpoint, are there differences between Italian and sushi restaurants?

Borgognone: I operate the dining room the same way I would an Italian restaurant, following a simple philosophy of giving people what they want and treating them the way they want to be treated. We do not want to be pretentious. We want people to feel comfortable and get an amazing smile when they walk in. We want a very hospitable environment. We pay attention to details and try to create the most magnificent experience for our guests. It’s no different from the great French restaurants.