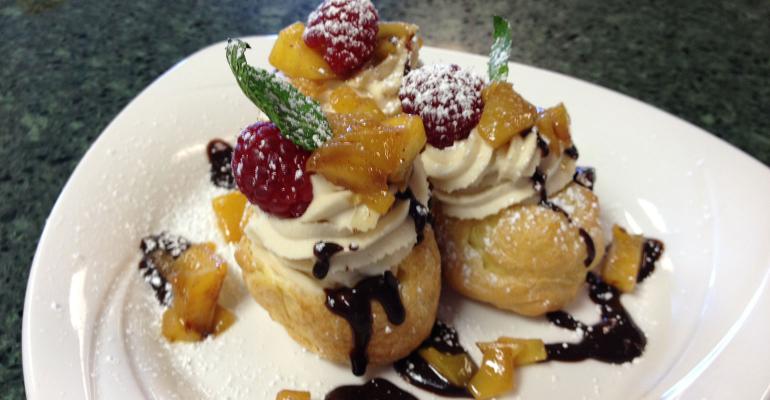 When Michael Watz and his wife, Joyce, were brainstorming ideas for a recipe to enter in the 2017 Mondelez International OREO® Cookie Recipe Contest, he knew he wanted a non-baked cheesecake texture, Cuban and Mexican flavors, and, of course, crushed OREO Cookie Pieces. He needed something else, maybe something French. “My wife said, ‘You should consider profiteroles,’” Watz says. “We enjoy profiteroles, and I served sweet and savory ones in restaurants in Chicago.”

Watz, who runs a food and beverage consulting company, Watz Your Culinary Professor, won the contest with his OREO® and Agave Grilled Mango Profiteroles. The profiteroles are made from a batter of water, butter, salt, flour and eggs, piped into cream puff shapes, baked, then sliced in half. The filling is made with whipped cream, mascarpone, crushed OREO Cookie Pieces, brewed coffee, Mexican coffee liqueur, agave, and other ingredients. The sauce features agave grilled mangoes, brown sugar, rum, cinnamon and other ingredients.

“I knew the cooking technique would caramelize the mangos and give them a smoky flavor,” he says. “The coffee and chocolate are a natural flavor combination.”

This is not the first time Watz has won a recipe contest. When he worked as a chef instructor at Washburne Culinary Institute in Chicago, he won second place in a duck recipe contest. It is also not the first time he has used OREO cookies to make a successful dessert. When Watz worked at Dick Clark’s American Bandstand Grill, he came up with an OREO Pecan Shell Ice Cream Pie. “It was our No. 1 bestselling dessert,” he says.

Watz has worked in several restaurants and schools over the years. “I always wanted to be in foodservice, and at an early age I knew I wanted a bigger role,” he says. “I wanted to be responsible for multiple locations and to be a decision maker.”

The contest was sponsored by Nation’s Restaurant News, Food Management, Restaurant Hospitality and Mondelez International Global. The winning recipe was judged on creativity and recipe accuracy/methodology. The Grand Prize Winner receives $3,000 and a one-year supply of OREO Cookie Pieces. A donation of $1000 will also be made to the After-School All-Starts for Well-Being Program.