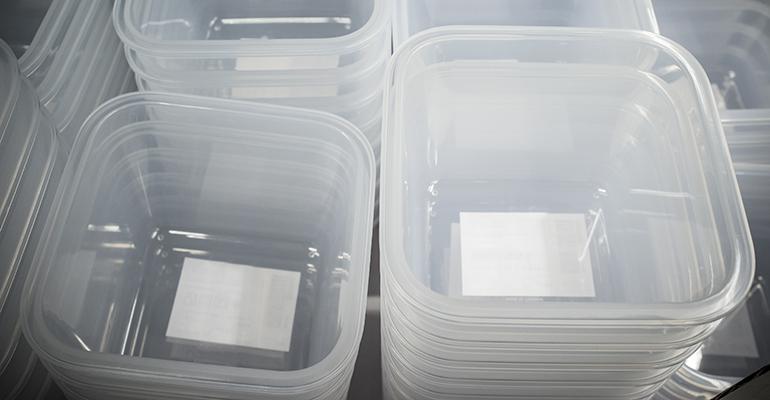 Bills that await Gov. Gavin Newsom’s signature include a ban on ‘forever chemicals’ in disposable foodware and making to-go cutlery by request only

California lawmakers have adopted several bills that will change the type of to-go packaging that can be used in restaurants across the state. The bills have been sent to Gov. Gavin Newsom’s desk for signature.

Here’s a look at some of the bills:

Assembly Bill 1200, known as the California Safer Food Packaging and Cookware Act of 2021, was approved earlier this month and would prohibit the sale or distribution of food packaging that contains perfluoroalkyl or polyfluoroalkyl substances, or PFAS, beginning Jan. 1, 2023.

Often called “forever chemicals” because they don’t break down, PFAS are often used in disposable food packaging to make paper or plant fiber containers resistant to grease and liquids. The bill would impact paper wraps, liners, bags, sleeves, dinnerware and takeout containers made of molded fiber.

Proponents of the ban contend that PFAS can leach into food or drink from such containers, and when they end up in landfills or are used on “compostable” products, the chemicals can contaminate soil and water sources.

The bill, also requires cookware manufacturers to disclose use of PFAS and other toxic products by 2024.

“Federal regulations on PFAS allow companies to self-certify that a chemical used in their food packaging is safe,” said California state Assembly member Phil Ting (D.-San Francisco), the bill’s sponsor. “That’s not good enough for me — not when our health and environment suffer the consequences. Manufacturers should use safer alternatives so that our families aren’t ingesting harmful chemicals.”

According to Ting, the class of roughly 9,000 man-made chemicals that are called PFAS have been linked to health problems ranging from cancer and hormone disruption to thyroid disease and vaccine interference.

“The insidious thing about PFAS is that we are not only exposed by using products that contain them, but we are re-exposed when these chemicals get into our water, air, soil and crops,” said Andria Ventura, legislative and policy director at Clean Water Action, in a statement. “Since food packaging is a major source of litter in water and can contaminate compost, our precious water resources and food are at risk. That’s why AB 1200 is so important.”

Nearly 30 states have reportedly enacted drinking water standards for PFAS and lawmakers in number of states, including Maine, Connecticut and Vermont, are phasing out use of PFAS in food packaging.

AB 1276: Single-use foodware by request only

Under this bill, full-service restaurants would be prohibited from providing single-use foodware or standard condiments unless specifically requested by the consumer.

The goal is to discourage restaurants from throwing plastic cutlery and ketchup sachets into to-go bags. Often those extras get tossed into the trash — especially when diners are eating at home — creating unnecessary waste.

The legislation also requires third-party delivery companies to customize menus with a list of available single-use foodware accessories and condiments so consumers can select what they need.

An enforcement agency would be created before June 2022 in each city and/or county. The first and second violations would result in a notice of violation. After that, violators would face a $25 fine for each day in violation, up to $300 annually.

The California Beverage Container Recycling and Litter Reduction Act allows glass beverage containers to be sanitized and reused as an alternative to recycling.

Under the bill, beverage distributors would pay the bottle deposit collected toward refilling reusable bottles, not just for recycling.

This bill seeks to prohibit false claims about the recyclability of products and packaging.

Currently, the popular triangular“chasing arrows” symbol is used on virtually any product that is recyclable in theory, even if the product is not recycled. Under Senate Bill 343, by January 2024 the state will publish information about how materials are recycled, and prohibit misleading claims — including use of the chasing arrows symbol on packaging that doesn’t meet the state’s recyclability standards.