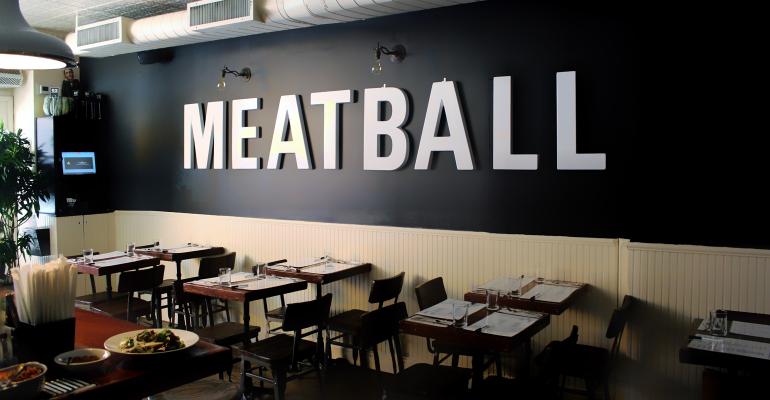 The Meatball Shop rolled out in New York City in 2010, before singularly focused restaurants and customizable menus were all the rage.

The founders, chef Daniel Holzman and restaurateur Michael Chernow, quickly brought their irreverent spirit and ball puns to more outposts in the Big Apple. But things were moving too fast, the founders later admitted. They took a step back and reassessed. Now the brand is ready to grow again with help from its first CEO, Adam Rosenbaum, who joined the company about a year ago. The Meatball Shop had “lost a little bit of the charm,” Rosenbaum recalled. “It wasn’t the same anymore.”

Holzman and Chernow came to Rosenbaum with a challenge: grow the quirky brand without losing what makes it special.

The founders are still involved with The Meatball Shop, but Chernow has exited daily operations. In 2015, he opened Seamore’s, a seafood restaurant with some of the same quirky trappings as The Meatball Shop. Seamore’s now has four locations in New York City.

Rosenbaum had experience scaling a concept. He’d done just that with Flywheel Sports, the cycling studios that have spread across the country. And much of his previous work was in the restaurant and hospitality industry, including as vice president of operations at Patina Restaurant Group.

With Rosenbaum’s guidance, The Meatball Shop plans to open in Washington, D.C., in June, its first location outside New York City. But before leaving the city, Rosenbaum looked at the existing locations.

“I didn’t come in and say, this is what you need to be a chain, but we can find some efficiencies,” he said. The look of the restaurants needed updating, he said. They’re brighter and less cluttered than they were five years ago, and they’re more Instagram ready. Currently, there are six locations in New York City, and they have all have been updated or opened with this new look in mind.

But Rosenbaum was careful to keep the eccentricity that customers love, including plenty of meat grinders on display. In the original location, for example, a wall has been painted black and dotted with bright white meat grinders where previously there were old photos of people on the wall that no one could recognize anymore, he said.

Buying from local farms was always part of the founders’ ethos, but it was not something customers necessarily knew about or expected in their meatballs, Rosenbaum said. He wanted to highlight sourcing, so a chalkboard that notes which farms the restaurant works with is now displayed at each location.

Rosenbaum also streamlined the menu. The Meatball Shop always had a dizzying menu on which diners marked their choices for meatballs and sauces and sliders and sandwiches. He recalled a photo on social media of a women pulling out her hair in frustration. The caption revealed the source of her irritation — ordering at The Meatball Shop.

The menu is still laminated, and customers can still customize their “balls,” but the menu guides them through the process with large red numbers. Less hair pulling now, according to Rosenbaum. The Meatball Shop menu before and after Rosenbaum made changes

Rosenbaum kept the prices relatively low. The average check is around $22 between lunch and dinner. But he’s experimented with pricier items, too. And chefs use Sidepiece, their cocktail bar and event space in the Hell’s Kitchen location, as a test kitchen of sorts, he said.

Today, Rosenbaum looks forward to expanding to a new city. The D.C. market made sense in part because it was close enough to continue with the supply chain, he said.

Moving outside New York City was a long time coming.

“Meatballs aren’t just a New York thing; they’re loved all over the world,” Holzman said in an email announcing the new location.

Next, Rosenbaum is considering locations in airports and stadiums. The restaurants could be translated into smaller, fast-casual establishments, too, he said. The Meatball Shop currently does about 20 percent of business through takeout and delivery, so a small commissary in New York City could help expand its delivery reach while also increasing catering capabilities.

Rosenbaum said he will make any decisions for the brand with the founders’ challenge in mind — to expand The Meatball Shop without losing what makes it special.