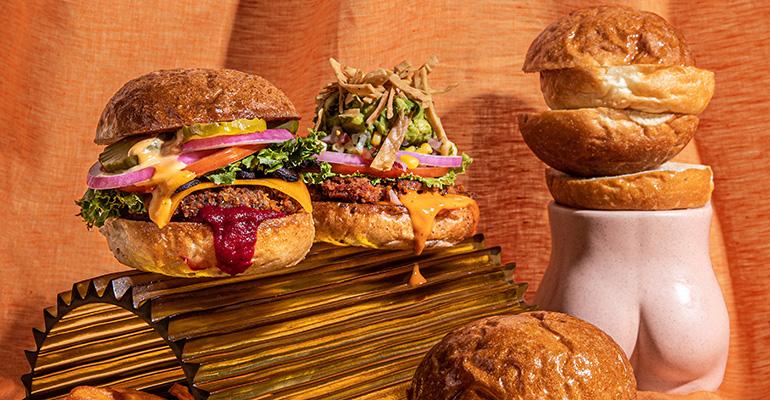 By Chloe announced a new name as part of a bankruptcy settlement.
Operations

By Chloe, the beleaguered plant-based brand, announced Monday a new name as part of a bankruptcy settlement: Beatnic. The new name applies immediately.

The name is inspired by the brand’s roots in the Greenwich Village neighborhood of New York City and the “beatnick” community the neighborhood was previously known for. The company also has a new slogan: 100% Vegan, 100% Delicious.

The brand, which filed bankruptcy last December, has been embroiled in a lawsuit with founder and former owner Chloe Coscarelli since 2018. In March of this year, the company was purchased by investors Sisban Foods and Kitchen Fund for $333,000 plus repayment of all its debts, but they were barred from acquiring the trademark and using the name By Chloe.

“The rebrand is more than an overhaul of our visual identity but also an homage to our history as trailblazers in the plant-based category,” said Beatnic president Catey Mark Meyers in a statement. “While our product values have not changed, we are doubling down on our mission to delight both vegans and non-vegans alike with a robust culinary innovation pipeline that has broad appeal.

“From our management to our store teams to our investors, we’ve assembled the most agile team in the company’s history, and we are all fiercely committed to delivering a bold product. We have the benefit of rebuilding from the insights of this past year of pain points as we tighten up our business model and enhance all elements of the experience.”

Beatnic’s changes for the 7-year-old brand also include a new logo and packaging, as well as an enhanced web and mobile experience designed by branding agency Pearlfisher.

Like the name, ,the new logo is inspired by “the beatnick community in the Village,” according to the company, and meant to be a representation of the visual art that originated from the community.

The brand describes itself as “a destination for vegans and omnivores alike … Beatnic continues to innovate in the category while staying true to the brand’s creative, inclusive, and vibrant core values.”

The rollout of new packaging, signage and digital enhancements will begin in July and be completed in September.

“There has been a magic to this concept since the first day on Bleecker Street,” said Greg Golkin, managing partner of Kitchen Fund, Beatnic’s co-lead investor, in a statement. “While the Guac Burger and Quinoa Taco Salad have cult-like followings, the brand’s audaciousness and eccentricity are what set it apart. The new name will celebrate that progressive spirit while reaffirming a commitment to an accessible vegan experience.”

There are currently 10 locations of Beatnic across New York, Providence and Boston.