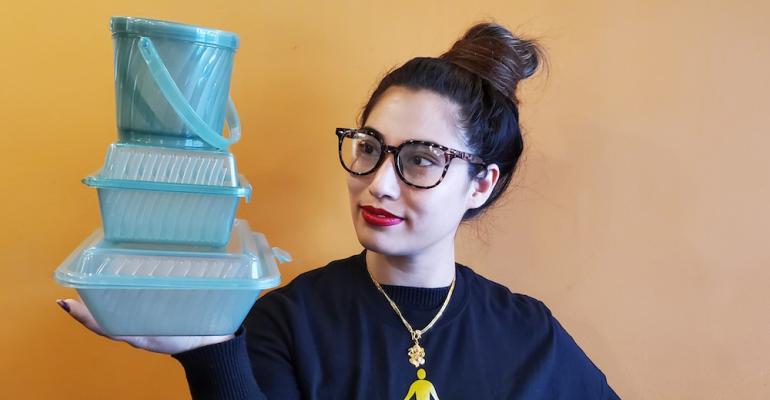 Start Slideshow ›
Fed up with contributing to plastic waste but hoping to hold on to off-premises sales, independent operators are taking the lead in the movement to ditch disposables

As restaurant operators doled out container after container of to-go meals during the pandemic, many were forced to face an unfortunate truth: Much of that packaging — even the compostable items — would become a significant contributor to the nation’s growing problem with disposable waste.

The advocacy group Upstream, which released the report “Reuse Wins” in June, estimates that restaurants pay roughly $24 billion on disposable foodware annually — from plastic cutlery to polystyrene cups — and businesses and city governments pay about $6 billion in solid waste management.

Very little of that packaging waste is being recycled and even potentially compostable food containers are rarely accepted by industrial composters. In addition, every disposable item that ends up in landfills, as street litter or in the ocean represents a waste of resources — water, trees, oil, or energy.

But there is a growing movement toward a potential solution: reusable to-go packaging.

Across the country, restaurants are turning to sturdy, washable containers that can be used again and again, in place of disposable plastic tubs and clamshells lined with potentially toxic “forever chemicals.”

Some are finding partnerships with a growing number of third-party service providers or public-private partnerships, others are creating their own systems.

Upstream contends that restaurants can save money by creating a reusable packaging system, even taking into account the capital costs of dishwashing equipment and added labor.

But the real progress in reusable to-go packaging is being made at the independent restaurant and small chain level, in big and small ways.

Small chains like Tiffin in Philadelphia are building loyalty with reusable containers that can be returned to delivery drivers with the next order.

In Los Angeles, restaurants like M Café are generating income and sustainable goodwill by selling items like matcha granola or vegan oatmeal chocolate cookies through the recently launched Topanga Supply, a specialty food marketplace that delivers products in French glassware that can be returned, washed, and used again.

Operators say they’re still trying to figure out what works best. But they remain enthusiastic that the industry will find a better way than throw away.

Here’s a look at five restaurant concepts in different markets that are making it work with reusable to-go packaging.