The nine-unit Tiffin Indian Cuisine chain, based in Philadelphia, launched a reusable packaging program for to-go and delivery in March.

Munish Narula, founder and president, said the brand’s name refers to traditionally metal lunchboxes used in India, but that material proved to be too expensive. Instead, Tiffin found a durable plastic container that can be washed 1,000 times without degrading.

The chain developed a system for tracking the containers. Guests can select the reusables when they order online. The order generates a label with a QR code that goes on the container.

Guests have four weeks to return the containers to any location — or, because the chain offers in-house delivery, guests can simply hand the (hopefully rinsed) used containers to the delivery driver the next time they order. Narula  is working on partnerships to create more drop-off points throughout the city at C-stores and other locations.

If the containers don’t come back, the guest is charged $3.50, but so far that hasn’t been a problem, he said.

“It was to our great pleasure and surprise that we have not charged a single customer,” said Narula.

That’s in part because customers choose to participate. Those who don’t want the responsibility of returning the container can still order their meal in disposable packaging. But guests who choose reusables earn “T-coins,” or rewards toward discounts, so there is a strong incentive.

The program is still young, but Narula estimates close to 30% of guests choose reusable packaging. With about 80% of Tiffin’s sales coming from delivery and takeout, the numbers are significant, he said.

“We’re promoting the hell out of it. We really want everyone to use it,” Narula said.

At Tiffin, the returned containers are soaked in sanitizing solution, then run through the dishwasher and dried, just as dishes are for dine-in guests.

While the up-front costs are significant — each container costs about $3 — Narula said he estimates that using a container 18 times essentially covers the cost by reducing the chain’s need for single-use packaging.

Shortly after the program launched, local health officials paused the reusable program briefly, in part because health codes did not specifically allow for container reuse. Tiffin was granted a variance.

Now Narula said local officials are working to change the rules so procedures can be codified, and operators won’t have to seek a variance.

Narula said guests have been very appreciative. It was an idea that ultimately came in response to guests asking the chain to reduce takeout and delivery packaging waste, he said.

“Our customers had a big role in pushing us toward this because every day someone would write or come to the restaurant and say, ‘I’d order more often if I didn’t have to take home all these plastic containers,’” Narula said.

Leslie Silverglide, CEO and co-founder of the 20-unit salad concept Mixt, said she had developed a reusable container program for her San Francisco-based chain in 2019 that was about to launch. Then the pandemic hit.

At the time, Mixt already allowed guests to bring in their own reusable bowls, but COVID-safety protocols put a stop to that. Instead, Mixt began a partnership with Dispatch Goods, which provides reusable stainless-steel containers for restaurant takeout and delivery.

At Mixt, guests pay a $1.50 fee to have their to-go meal in a reusuable container, which Silverglide said goes directly to Dispatch Goods. Mixt, meanwhile, saves money by not having to buy disposable to-go containers, Silverglide said.

“It’s not a profit center for us,” she said. “But our whole M.O. is trying to avoid anything going into the waste stream.”

Silverglide said she loves that Dispatch Goods is “trying to create the idea of a fourth bin,” a reusables bin that will join the trash, composting and recycling collection that are now so familiar in the Bay Area.

With the system, Mixt doesn’t have to worry about tracking containers or washing and sanitizing.

Silverglide said she hasn’t given up on the idea that Mixt might have their own reusable packaging down the road, but she said she plans to continue working with Dispatch Goods as they move into new markets like Los Angeles, where Mixt is also continuing to grow.

“We could do both,” she said. “It’s good to give people options.”

In Ann Arbor, Mich., city officials are working on carbon neutrality, including reducing the waste problem that was so exacerbated by the pandemic. But Michigan is a state that prohibits bans on single-use plastics, so sustainability officials were looking for incentive programs to change consumer behavior and reduce reliance on disposables, said Missy Stults, sustainability and innovations manager.

In June, the city launched a pilot program called Reduce, Reuse, Return with four restaurants, including the iconic deli Zingerman’s and sister concept Miss Kim. The folks at Zingerman’s had already begun researching the development of their own reusable packaging program and had tested various containers before the pandemic hit.

The city tapped that knowledge and invested in a load of rigid plastic containers that Zingerman’s had deemed worthy and branded them with QR codes to track.

Ji Hye Kim, chef and managing partner for Miss Kim, said the trial was initially meant to last a month, but it’s going well, so they decided to continue. At Miss Kim, the reusable containers are offered for the restaurant’s meal kits and takeout brunch, for example, and almost all guests opt in.

There are details to iron out, she said. But it’s a good first step.

Kim is concerned about the storage needed for packaging, which hasn’t been a problem while the dining room was closed. But now the restaurant is slowly reopening for dine in, and demand for takeout/delivery is starting to decline — though she hopes to keep that business — so Kim has to balance the space needed for off-premise packaging versus dine-in service.

Stults, meanwhile, said the city is applying for grants to expand the program. The feedback from the pilot has helped fine tune the process and so far the response has been very positive, she said.

“We would like to do this for the entire city,” she said. “We’re committed to trying.”

At the two-unit fast-casual Grainmaker concept in Boston, founder and CEO Chris Freeman has been offering reusable to-go packaging since 2019.

Freeman said he got the idea from Starbucks, where guests could refill reusable cups for a discount. Even back then at Grainmaker, guests would sometimes bring their own Tupperware in an attempt to avoid using plastic, he said.

So Freeman decided to work with a glassware manufacturer to design containers with the Grainmaker logo. Guests pay a one-time $10 to buy into the program, and they get a fresh, clean glass container whenever they bring one back — as well as a discount on their order, which varies, but currently is 35 cents.

The containers are washed and sanitized in the restaurants and reused.

Glassware is sometimes believed to be too fragile for packaging reuse, but Freeman said he has only had one container get chipped in two years. He likes that the high-quality containers serve as a marketing tool for the brand.

Still, not all guests choose to participate and Grainmaker also offers disposable packaging. The first year, Freeman estimated that about 5% of guests chose reusable containers, which was about 20 orders per day per location. At that rate, Freeman estimates the program diverted up to 3,000 pounds of disposable waste from the landfill that year.

Now Freeman is toying with the idea of starting a side business to help other restaurants join the movement. He envisions a world where a community of restaurants share containers and the collection process.

“It’s helping the planet. This is why we started Grainmaker,” said Freeman of the Southeast Asian concept. “I’m a business guy and I wanted to make an impact. I firmly believe that anyone in the industry can have an impact.”

Naama Tamir and her brother launched the concept Lighthouse in 2011 with the goal of being a truly sustainable restaurant. From ingredient procurement to paying fair wages, she said, “the idea was that we could use this as a pilot to do things better for the industry at large.”

For takeout and delivery, the restaurant uses compostable packaging. But Tamir said containers taken off premises were probably just ending up in the trash since the city doesn’t have a residential composting collection program. “It felt like green washing,” she said.

Then Lighthouse was approached by DeliverZero, a New York City-based third-party delivery provider using reusable containers. “I thought this is perfect. It was a connection that allowed us to achieve something we wanted to do for a long time,” she said.

Guests order takeout or delivery through the DeliverZero app or website and the food is delivered in durable plastic reusable containers. DeliverZero tracks the numbers of containers used per order, and they can be returned to participating restaurants (or to the delivery drivers) where they are washed and sanitized.

If the containers don’t get returned, guests are charged $3.25 or so per item. Lighthouse pays a percentage of each sale to DeliverZero, as they would any third-party provider, and the cost is comparable to Grubhub and the other big players, she said.

The only problem is that the number of orders that come through DeliverZero is still very small, said Tamir. The restaurant only gets about five orders per week. “There isn’t much awareness yet, or people might be leery of having to bring things back,” she said.

Either cities get behind a composting system that accepts food packaging from businesses and residents in an energy-friendly way or they figure out a system of reusable packaging that works, she said.

“We have to go with one system and stick to it,” said Tamir. “I would love for this to be the system. It’s like a library of containers. I love the philosophy of it and I really hope it works.” 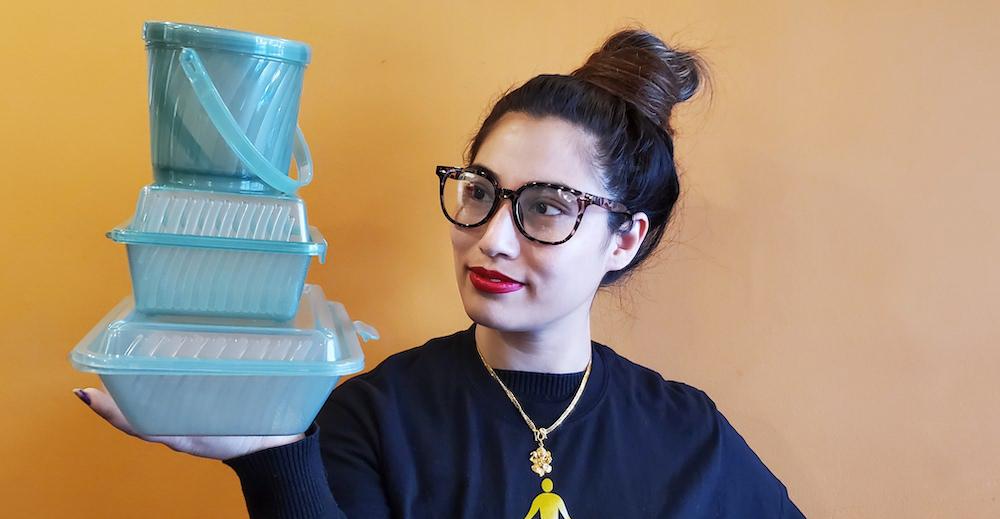