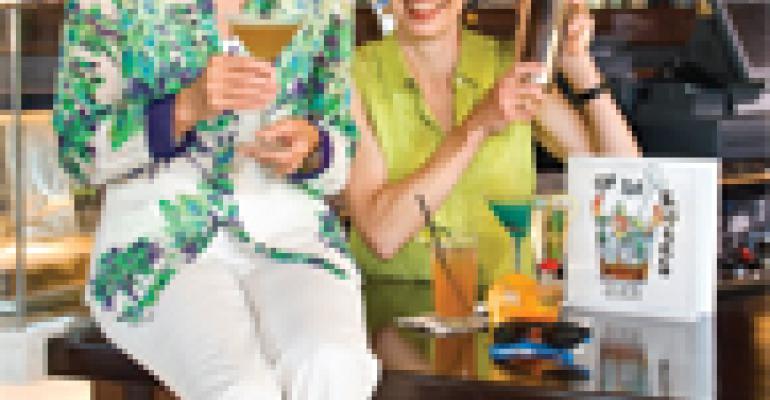 Shakin' Up The South

Leave it to New Orleans restaurant royalty the Brennan family to show other operators how to mix ambition with tradition, even in dire circumstances. No sooner did cousins Ti Adelaide Martin, Lally Brennan and Alex Brennan-Martin — the third-generation branch of the family that first took over New Orleans landmark restaurant Commander's Palace back in in 1969 — wrap up the post-Katrina restoration of the iconic original than they began to plan a second Commander's, this one to be located in a Florida beach resort. The result: Commander's Palace & On the Rocks Bar, which opened in Destin, FL, last July.

The new place is a gem. For one thing, there are views. Located in the Emerald Grande resort complex in HarborWalk Village, Commander's Palace Destin looks out on Destin's fabled blue-green water and white sand beaches; the New Orleans flagship Commander's overlooks a cemetery. Granted, no one who dined there ever left thinking, “Gee, I wish this place had a better view.” But still. If you could reproduce the full-tilt Commander's experience amidst world-class scenery, the place would be a gold mine.

It seems like a can't-miss proposition…unless it's your job to replicate the look, feel, ambiance and food of the original. Which is where the restaurant operations genius that's built into the Brennan family's DNA kicked in.

First came the design. Lally Brennan and her mother Dotty collaborated with design firm The Johnson Studio to translate the casual elegance of the original into a Florida beachfront context. Now patrons who sit in the airy, handsome new dining room and catch the Destin sunset through its floor-to-ceiling windows must think they're in heaven.

And that's before they sample the food. Holding up Commander's high gastronomic standards is a huge challenge. But the Brennans were able to tap in-house talent to do so. The executive chef in Destin is Danny Trace, who has spent the last 14 years in the Brennans' employ, the last two as executive chef of the group's Café Adelaide in New Orleans.

For Destin, he's come up with a haute Creole menu that features the expected Commander's classics but throws more than a few Southern and Floribbean influences into the mix. Guests can opt for legendary starters like Turtle Soup or Shrimp & Okra Gumbo, then dig into entrees like Shrimp & Grits Nassau or Florida Red Snapper Court Bouillon. But they'll also find small plate fare like Shrimp and Tasso Corndogs, Apalachicola Oysters BLT and Dirty Duck Sliders.

“Commander's has a healthy reverence for past culinary traditions,” says Ti Martin. “But it is our day-to-day passion to be on the leading edge of Creole cooking's continuous evolution.”

But no matter how good the food is, will there enough fine dining patrons in Destin to support something at the level of the new Commander's? The Brennans see it as a growth market. “Destin has been our playground for as long as I can remember,” says Martin. “It's where New Orleanians and the entire Southeast come to play.”

Let's hope they keep coming, because success in Destin is critical to Commander's future. Its Las Vegas venture in the ill-fated Aladdin/Desert Passage complex (now Planet Hollywood) closed in late 2006. The Brennans are looking for a new location there. And the flagship Commander's in New Orleans now finds itself in a weakened market. The city's population stands at 72 percent of pre-Katrina levels. Convention bookings have made a comeback, but a weak economy makes you wonder how many delegates will show up and how much they'll spend on food. Which is to say, the two primary sources of business for Commander's might not come all the way back.

What is holding steady is the restaurant's ranking at the top of the 2009 Zagat Survey/New Orleans. Commander's has held the “most popular” ranking for 17 straight years. Even when you dominate at home, it's smart business to have a second restaurant in a different market. No wonder the Brennans chose Destin as their preferred avenue for growth.