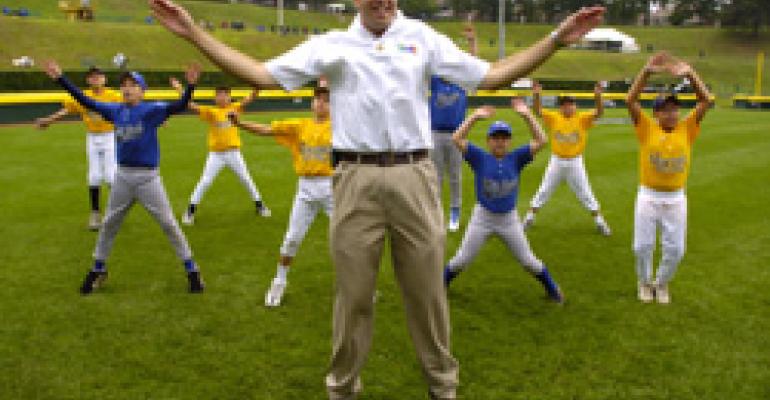 JUMPING INTO THE OBESITY FRAY

No one can deny that U.S. obesity rates are climbing. A report issued in late August by nonpartisan health advocacy group Trust for America's Health found obesity increasing last year in every state but one-Oregon. Overall, 119 million American adults-64.5 percent-are either overweight or obese, with 24.5 percent qualifying as obese. The U.S. Department of Health and Human Services has set a goal of reducing obesity in adults to 15 percent or less by 2010. No wonder these advocacy groups are getting on your case about portion size, nutritional information on menus and the trans fat content of the meals you serve in your restaurant.

"Obesity is a gateway to heart disease, diabetes and a host of other diseases," says Parris Glendening, president of the Smart Growth Leadership Institute and co-author of this report. Decades worth of public health data provide strong evidence of this link.

But not exactly incontrovertible evidence. Probably the least-examined aspect of the obesity story relates to reports on it issued by the prestigious Centers for Disease Control & Prevention (CDC). Last year, the agency put out a study estimating that 400,000 deaths per year were directly attributable to obesity. That puts obesity right up there with smoking as a public health menace. No wonder the media and nutritional advocacy groups jumped all over this number. Many still cite it as gospel today.

However, a different group of CDC researchers revisited the same data and reworked this report in April 2005. They pegged annual obesity-related deaths at 112,000, or 288,000 fewer than their CDC colleagues had found the year before. Both groups of researchers work for the same agency and have M.D. or Ph.D degrees. How could brainiacs like these arrive at such widely differing conclusions?

Forbes writer Daniel Seligman discovered major statistical errors in the first CDC report. The big one: Relying solely on a population sample that dated from the early 1970s. Mortality rates for the obese were higher then than now, due to vast improvements in the treatment of heart attacks and strokes-the two cardiovascular problems inflicted upon the obese at very high rates. "Obesity was far more life-threatening to the obese population of 1971 that it was to the obese in the later samples," Seligman writes, "and generalizations drawn from the 1971 group are simply not transferable to those who are obese today."

The upshot: When the second group of CDC researchers added populations from 1976-80 and 1988-94 to their study, they found that obesity-caused deaths declined by 63 percent. Seligman also notes that the second CDC report "added that moderately overweight people gain some protection from the extra poundage, so that net deaths from overweight were in the neighborhood of 26,000. The new finding transformed obesity from fearsome killer to pitiable also-ran, ranking in seventh place on the CDC's list of preventable death causes."

To sum up: U.S. obesity: way up. Deaths from obesity in the U.S.: not nearly as bad as advertised. No wonder this topic causes confusion.

So is your restaurant out of the woods on obesity issues? Maybe. It's clear that vigorous efforts to convince U.S. citizens to eat less, exercise more and eat more healthful foods when they do eat are now underway. As National Restaurant Association head Steven Anderson says, restaurants "should not be blamed for issues of personal responsibility and freedom of choice."

Not that plaintiff's attorneys and state legislators won't try. Be thankful that lobbying efforts by the NRA and many state restaurant associations to put the kibosh on obesity lawsuits and menu labeling mandates have been so effective.

But now it looks like you'll have to worry about something else. Officials have begun to encourage some operators to make changes in how they purchase and prepare food in their restaurants. Leading the charge: New York City.

Here's what New York City Department of Health and Mental Hygiene commissioner Dr. Thomas Frieden says about his agency's initiative to remove trans fats from restaurants kitchens. "New York City's restaurants are the best in the world but they can be even healthier. Trans fat is artificially added to the foods we eat and is easily removed. To help combat heart disease, the number one killer in New York City, we are asking restaurants to voluntarily make an oil change and remove artificial trans fat from their kitchens. We are also urging food suppliers to provide products that are trans fat free."

Frieden possesses admirable diplomatic skills. He heads a department with wide enforcement powers, yet he's asking for voluntary compliance. And what's he asking for is for operators to eliminate partially hydrogenated vegetable oils from their kitchens. (Commercial vegetable oils used by restaurants for cooking, frying and baking often contain trans fat, as do many margarines, shortening and pre-fried foods.)

The Department sampled New York City restaurants and found that 30 percent used oils or fats known to contain partially hydrogenated vegetable oil for cooking or frying or in spreads, such as margarines. Some experts think the true number is closer to 60 percent.

Will New York City restaurants comply? Hey, they've got a business to run. The NYC DOHMH says "clearing trans fat out of your kitchen is an excellent way to attract customers and increase demand for your products." Could be. But our guess is that many operators will make the change voluntarily only if new trans-fat-free oils cost no more than the ones they replace, and menu items made with them taste as good as they did before the switch was made.

One thing: If you say your restaurant is cutting out trans fat, you'd better follow through. Just last week McDonald's settled a pair of lawsuits that arose because the company announced it would lower trans fats in its cooking oil within a certain five-month period. A subsequent delay, and McDonald's bungled communication to consumers about that delay, resulted in an $8.5 million educational campaign the company must now fund. Seven million goes to the American Heart Association for an education campaign about trans fats in foods. The other $1.5 million is to be spent publicizing the fact that the company had not followed through on its commitment to switch oils.

Don't expect Subway to get caught in this same trap. The company now sends out Subway guy Jared Fogle-who lost 245 pounds in a year on the mostly-Subway diet--to give the anti-childhood obesity pitch at schools. Subway says its F.R.E.S.H.(Feel Responsible Energized Satisfied and Happy) initiative has reached more than 75,000 kids. The marketing message: eat healthy, exercise regularly and eat at the same restaurant where Jared does.

As a marketing stance that's in tune with the times, this one's brilliant. Maybe your should think about coming up with something similar for your place. You'll be avoiding a lot of headaches, and perhaps gaining some incremental business, if you do.