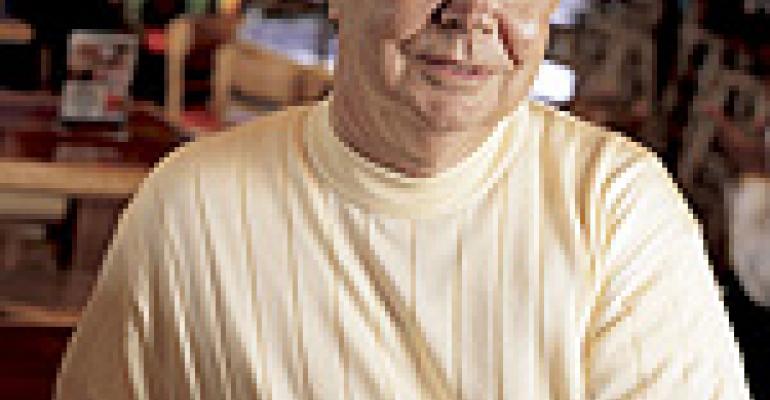 Brooks didn't originate the Hooters concept. He bought the rights to it in 1984 when Hooters was a single-unit operation in Clearwater, FL. It was primarily a bar then, but began to emphasize food, particularly chicken wings, when Brooks took over. Hooters steadily expanded under his leadership and has 430 units today. There are locations in 46 states and 20 countries, including China. Average annual unit volume is $2.4 million, and the chain's 60 million annual customers spend about $13.25 per visit. That makes Hooters bigger than, for example, the Hard Rock Café and Ruth Chris Steak House chains combined.

The concept seems to work anywhere. We recall writing a story in RH about the chain's debut in the San Francisco market, where the working assumption was that something as banal and unsophisticated as a Hooters restaurant would be laughed out of town. Instead, the San Francisco unit set all-time records for opening week and opening month volume.

Brooks' formula for Hooters was simple. As he put it to Fortune magazine in 2003, "Good food, cold beer and pretty girls never go out of style." True enough, but it was the uniforms Hooters put on its girls-tangerine-colored short shorts and skimpy tank tops bearing the Hooters logo-that drew the ire of many, particularly religious groups and women's organizations. No matter that 30 percent of Hooters managers were female, as were one-quarter of its guests. It was categorized as blatantly sexist by many, a place where grown-up frat boys went when they were looking for a cheap thrill.

That negative image didn't stop Brooks from expanding the brand. The Hooters golf tour for developing pros is still going strong, and the Hooters Casino and Hotel opened recently in Las Vegas. Hooters Air had a three-year run as a scheduled commercial airline before becoming a charter-only operation earlier this year.

Brooks' charitable activities were legion. He gave away millions, much of it to education. But he got the most publicity for returning $200 after Hurricane Katrina. When a Congressional report on FEMA excesses mentioned that some money targeted to help hurricane victims was spent to buy an expensive bottle of champagne at Hooters, Brooks sent the money back, writing this notation on the check: "Even if it is my restaurant, it's still not right."

No wonder so many outside the industry had respect for Brooks. Within it, he was still seen as the guy who ran a place with a double-entendre name that was disrespectful to women. To be fair, that characterization is not wholly inaccurate. The company still sponsors things like the Miss Hooters contest and its slogan proudly proclaims Hooters to be "Delightfully Tacky Yet Unrefined."

Yet the Hooters experience seems a little tame when you look at what the de facto standard for female attire seems to be today. Forget the cleavage-baring outfits worn by female staffers in restaurants and shops. Many teens and young women now hit the streets in outfits that would have been classified as lingerie in the early years of Hooters.

And that's clothing. A visit to any public beach will find plenty of women in swimsuits that don't just leave little to the imagination, but seem carefully designed to display the goods contained therein. Even some of the young female communicants this writer observed during a recent mass at his local parish wore outfits that made us wonder if there's been a drastic revision of the Catholic Church's dress code since John Paul II passed away. Once racy, the Hooters girl outfit seems mainstream today.

Yet Brooks remained somewhat of an outsider. Other prominent business leaders who employ scantily clad women get treated with respect. Dallas Cowboys owner Jerry Jones is a pillar of his community, even though his Dallas Cowboy cheerleaders display shake-n-shimmy moves no Hooter Girl can match. And Time Warner chairman/c.e.o. Richard Parsons is a respected corporate titan, even though the women on display in his company's Sports Illustrated swimsuit issue make the Hooters girls look downright chaste in comparison. Even within the industry in which he was one of the giants, Robert Brooks never really got his due.