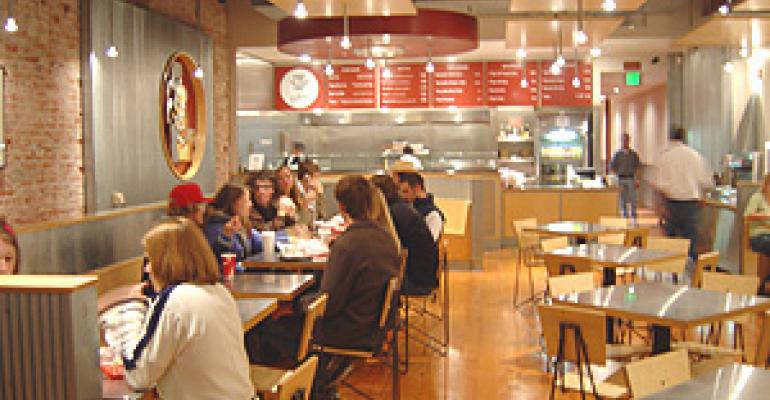 BLAME IT ON CHIPOTLE

Those who have followed the industry even longer can remember other eras when money got tight and restaurant dining slowed. But there were no fast-casual chains then. Today's scenario finds restaurant companies on either end of the price point spectrum holding their own, while those in the middle struggle. Just this morning, the National Restaurant Association released June numbers for its Restaurant Performance Index. This all-segment study showed that 53 percent of operators posted year-over-year gains in same-store sales, 18 percent reported no change and 29 percent saw sales decline.

With the majority of operators reporting gains while publicly traded companies collectively representing thousands of casual dining units reporting slippage, it's clear who's feeling the pain.

The trend is strong enough that a multiconcept company like Landry's Restaurants wants to get out of the middle. It recently announced it had hired Wachovia Securities to "assist in evaluating strategic alternatives for the Joe's Crab Shack chain." In other words, to sell it.

So what happened to Joe's? "We believe that our Joe's Crab Shack customer has been hurt by rising gasoline prices, energy costs and interest rates, making the operating environment more difficult in this segment of the casual dining sector," says Landry's c.f.o. Rick Liem.

Helping to convince the Landry's people is the fact that all the growth that experts predicted a few years ago for the fast casual market seems to have actually taken place. Back in 2004, Mark Kalinowski, then the restaurant analyst for Smith Barney, predicted the fast casual segment would grow between 15-20 percent per year. The NPD Group's 2005 Fast Casual Report found that the number of fast casual units increased by 13 percent in both 2003 and 2004, and that unit traffic increased seven percent over the prior year in 2004. Between 2001 and 2004, fast-casual sales volume grew at an average of 12.5 percent per year.

The situation doesn't guarantee an automatic win for fast-casual operators. They still have to deliver on the segment's value proposition. The keys: high-quality fresh ingredients prepared to order in view of the customer; a relatively sophisticated assortment of menu items; and a more pleasant in-store ambiance than customers find in fast food. How well fast casual operators can provide all this will determine their individual fates.

So where does this leave full service? You can expect the big casual dining chains to fight back with enhanced deals and promotions, some of them at price points that make a sit-down meal at a casual dining restaurant a better perceived value than that of their fast casual competitors. We're not sure exactly how it will all play out, primarily because the energy price hikes, previous versions of which have proven to be temporary, have an air of permanence about them this time around. But we're thinking this development is something to keep in mind as you develop your restaurant's strategy going forward.