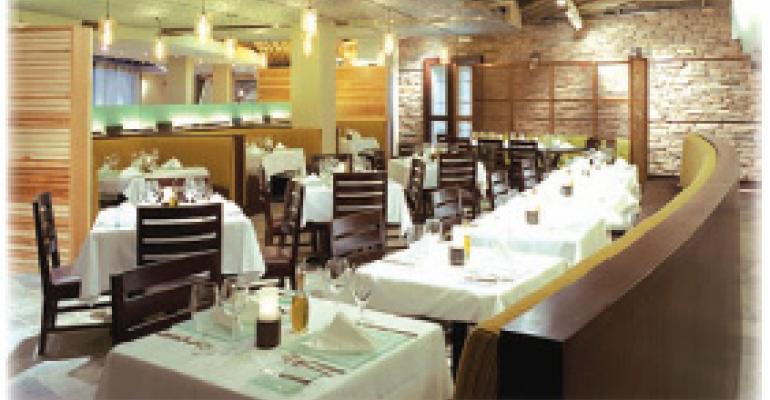 FROM FARM TO TABLEAND THE FARMERS OWN THE TABLE

Restaurant chefs and operators already go to great lengths to support sustainable agriculture and the family farms that practice it. And we're sure they're rooting for Agraria to make it all the way. But some of them will watch with interest to see how Agraria's backers deal with the day-to-day restaurant world realities from which they have previously been shielded.

Give the project's originator, the North Dakota Farmers Union (NDFU), plenty of credit. They've swung for the fences, selling shares in Agraria to farmer-members and using the proceeds to build out a big-budget fine dining operation. NDFU hired the prestigious DC firm Adamstein & Demetriou to design the place and the result is a 355-seat restaurant that sits on a prime hunk of real estate in Georgetown's Washington Harbor area. The final price tag for the 14,000-sq. ft.-space could approach $4 million.

But many restaurants have big bucks behind them. What makes Agraria unique is that most of the food it will serve will be shipped directly from the owners' farms. About one-third of the food will come from North Dakota (beef, potatoes, pasta made with North Dakota wheat), the rest from a network of family farms located in 25 other states.

Suffice it say that Agraria won't be cutting a prime vendor contract with SYSCO, U.S. Foodservice or any other foodservice distributor. Ultimately, the idea is to have every ingredient in every dish come directly from family farms. The business plan calls for a total of five units of this concept to open elsewhere in the U.S. over the next five years. The overall goal: Enable farmers to add value to and derive more profit from their crops instead of selling them as raw commodities.

Agraria defines its cuisine as seasonal and contemporary. Meat and pasta dishes are the staples; whatever is available from family farms across the country will make up the rest of the offerings. Entrée prices range from $20 to $40. NDFU has been careful to position the place as a fine dining operation, not as a steakhouse.

North Dakota Farmer's Union President Robert Carlson, a wheat and barley farmer, has been the driving force behind Agraria. It's been under development since 2002. "Farmers aren't all about getting federal money," he told a radio interviewer. "We're also about doing things to help ourselves. The ultimate way to add value to your product is to put it before the consumer in a restaurant."

Agraria opened with a limited "bistro" menu in mid-June. How come? Opening chef Paul Morello, on board since January, quit just prior to the opening. His replacement, Ricky Moore, most recently chef at Chicago's South Water Kitchen, won't take over until mid-July.

"This won't save the family farmer," says Carlson. "But if we have 50 of them it might make a difference."