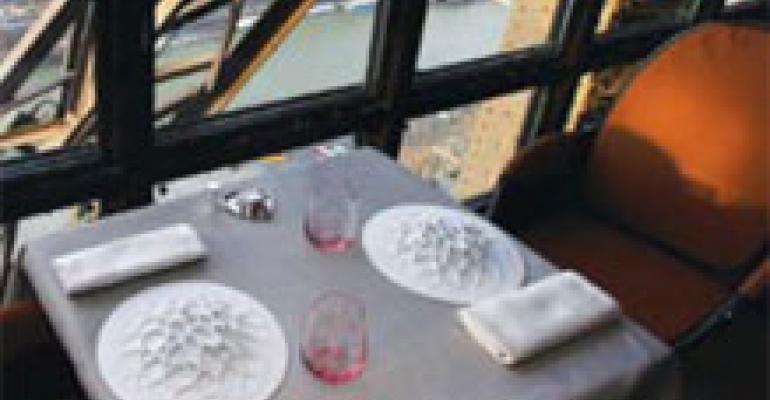 It’s Always Tough at the Top

Celebrity superchef Alain Ducasse’s newly opened Paris restaurant, Jules Verne, might have the best location, and perhaps the best view, in the world. It’s on the second floor of the Eiffel Tower, but that second floor is 410 feet up, providing patrons with an unparalleled view of the grandeur that is Paris. Jules Verne has been around for decades, but Ducasse took it over in December and aims to make its food worthy of its setting. Ducasse, who holds 16 Michelin stars at his collection of 20 restaurants, can probably pull it off.

Ducasse should have no trouble filling up the 130-seat Jules Verne, even though he’s charging a $108 prix fixe for lunch and $216 for dinner. These prices make it “accessible to everyone,” he claims.

It sounds like the perfect setup. Which it is, unless you have to cook there, something the globe-trotting Ducasse doesn’t plan on doing. “”I don’t work, I dream…I illustrate my dreams,” is the line Ducasse uses to describe his approach to the restaurant business.

But it could be a bad dream for executive chef Pascal Feraud and the rest of the Jules Verne staff. Operating a high-end restaurant way up in an 118-year-old structure comes with some built-in challenges.

One of the limitations: no gas. It’s too dangerous. The result is an allelectric kitchen, near-heresy for classically trained French chefs.

A second drawback: lack of kitchen space. Ducasse had to spring for an expansive ground-floor kitchen to handle the prep work. Ingredients then go up to the restaurant via elevator, where they are turned into finished dishes. If you’ve ever worked at a restaurant where all the food travels from one level to another via an elevator or dumb waiter, you know what Ducasse’s crew is up against here.

Another issue: too many tourists, 6.7 million per year. Ducasse is in the luxury business here, as befits the setting and the view. But his patrons will have to wade through a mob of sightseers before hitting the private elevator that will whisk them up to Jules Verne.

But that’s for others to worry about. Ducasse is off to his next round of openings. Two of them are set for New York City this year: Adour, inside the plush St. Regis Hotel, and Bistro Benoit.