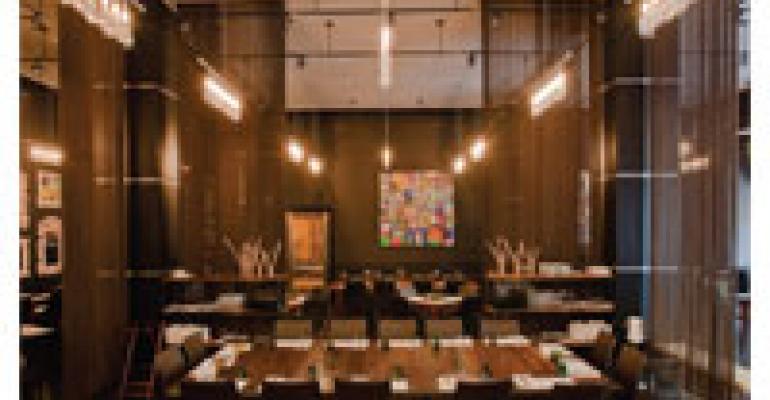 Despite Hurricane Katrina, Chef John Besh is branching out.

Good news for those who feared the once-vibrant New Orleans culinary scene would never recover from the blow dealt to it by Hurricane Katrina. It's bounced back to the point where the people behind the $145 million restoration of the Roosevelt Hotel could convince John Besh to open an Italian restaurant there, even though it wouldn't be the hotel's signature operation.

That lead designation was reserved for Sazerac, the Roosevelt's fine-dining option helmed by executive chef Stefan Kauth. So what convinced the multi-talented Besh, a James Beard award-winner whose family of New Orleans restaurants is now up to six, to accept the No. 2 slot at the Roosevelt? He saw the same thing the Roosevelt's investors did: so much dining and convention business on the horizon that two restaurants of this caliber made economic sense. The location — on Barrone, just a block away from and on the other side of Canal Street from tourist magnet Bourbon Street — was another huge plus.

To take advantage of it, Besh came up with Domenica. He's the acknowledged master of New Orleans cuisine, one aspect of which can be found in the strong Italian-Creole streak that permeates many local menus. But that's not the kind of Italian food Besh is serving at Domenica. Instead, he's going with a rustic approach, one that embraces all things authentic from the Italian countryside, not the food of one particular region.

Preparing it all is executive chef/partner Alon Shaya, formerly chef de cuisine at Besh Steak in Harrah's Hotel and Casino. To prepare for his new gig, Shaya spent a year working in Italy, mostly in modest, family-operated restaurants. “These were not Michelin-starred restaurants,” he says of his sojourn. “But what I came to understand was authentic Italian culture.”

Which is what guests feel they're getting when they pick up a menu at Domenica. Their first option is a pizza, with a choice of eight different pies that range from a simple Margherita to one that features Gorgonzola, pears, pecans and speck. All eight go for $13.

That's followed by a lengthy selection of salumi and formaggi, house-cured meats and cheeses. On the salumi side, the prosciutto is imported from Langhirano, Italy, and most of the other items (coppa, bresaola, soppresatta di Toscana, salami gentile, lardo and speck) are cured in-house. The eight cheese choices come straight from Italy. Patrons can pick a single item for $8, three for $12 and five for $18.

Both the 10-item antipasti lineup and the 12-item primi selection are available in small plate and large plate sizes. On the antipasti list, the octopus carpaccio with fennel and citrus goes for $8 or $12, depending on size. For primi, the stracci (torn pasta with oxtail ragu and fried chicken livers) is priced at either $11 or $16.

It's quite a breakthrough for New Orleans diners, for whom Italian dining has meant a trip to noble institutions like Pascal's Manale or Liuzza's. The food there seems indigenous to New Orleans, while Domenica's looks and tastes much like that of the old country. “I'm betting its (Domenica's) existence impacts the way Italian food looks and tastes in New Orleans,” said New Orleans Times-Picayune restaurant writer Brett Anderson in his rave review.

It underlines Besh's stature as a game-changer in New Orleans. After all, he's only a few years removed from relying on FEMA catering contracts to keep the lights on at his flagship Restaurant August in those first few terrible months post-Katrina. But he's on a roll now. He also recently opened The American Sector, a full-service restaurant located on the campus of the National World War II Museum. Located on Magazine Street, the restaurant serves what might be characterized as staples of the Greatest Generation, but with a Louisiana twist. And later this summer, Besh will open his first venture outside of South Louisiana: a second unit of his brasserie-style Luke in San Antonio.

Keep in mind that these new ventures were conceived in sour economic times nationally, particularly bad ones in New Orleans. We can only wonder what Besh will dream up when the economy gets rolling once again.