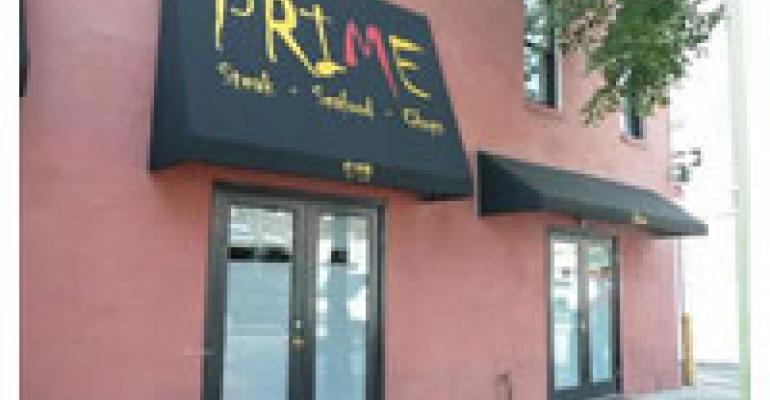 Chef/owners beware. No Top Chef contestant has had more riding on a successful outcome than the current season’s Timothy Dean. He hoped for success that would boost business at his Prime Steakhouse in Baltimore. No dice; he was sent home early. Now the place will be auctioned off on Sept. 16th. It’s a lot to lose because you screwed up a turnip dish on a TV show.

We’re betting a lot of restaurant operators whose business is living on the economic edge have dreamt of doing what Dean did: Get on Bravo’s Top Chef, do well and save it. As plenty of this show’s previous contestants have already proven, you don’t have to win to reap substantial publicity benefits. Even making it into the final four will make you a local culinary hero and attract legions of fans to your restaurant.

Dean didn’t get that far. Season Seven Judges Tom Colicchio and Eric Ripert, and guest judge Patrick O’Connell, booted him off on episode five. They didn’t like a turnip and potato dish to which Dean had added too much asparagus and not enough salt and pepper. Tasteless and bland, Ripert opined.

It’s certainly not that Dean can’t cook. Top Chef’s goofy one-off challenges can trip anyone up. And Dean had worked with the legendary Jean-Louis Palladin at both Jean-Louis at the Watergate in Washington and, for two years, at Palladin in New York City, where he was chef de cuisine. However, he’s had a mix of business setbacks and successes since striking out on his own.

The location that’s up for auction is in Baltimore’s Fells Point area. Dean operated it for a number of years as Timothy Dean Bistro, later replacing that with the short-lived, T. D. Lounge. The spot became a steakhouse earlier this year.

If nothing else, give Dean credit for pulling out all the stops to keep his restaurant afloat. His gambit worked at first, he told the Baltimore Sun, attracting new customers who were drawn in by the publicity generated by the show. Yet financial reality eventually set in. This May, the Circuit Court for Baltimore City awarded the noteholder a $1.3 million judgment against Dean and his real estate company.

Dean says he’s working several strategies to avoid losing his restaurant in a bank foreclosure auction. Looking further down the road, Dean says he wants to open a Washington, DC outpost of his steakhouse concept.

But in the meantime, the clock is ticking. Details of the auction can be had at auctionzip.com/Listings/923494.html. Jonathan Melnick Auctioneers will put the 6,700 sq. ft. building on the block at 4:00 p.m. on Sept. 16.

We hope Dean gets it all worked out and this final step can be avoided. As for other operators, if you’re counting on an appearance on Top Chef or a similar reality cooking show to keep your restaurant afloat, here’s our advice: Win.