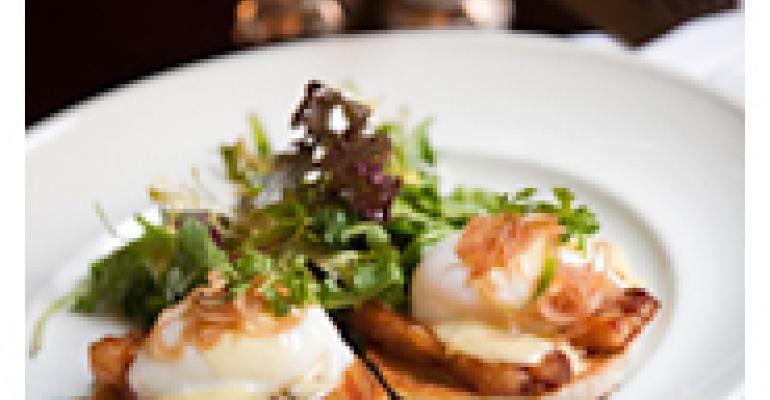 Food Network fixture Geoffrey Zakarian has been one busy boy. In the last month or so he’s opened not one, but two chic new spaces in New York hotels: The Lambs Club at the Chatwal, and The National at the Benjamin.

Zakarian, who first sharpened his skills at Le Cirque in the early 1980s and moved through the ranks at 21 Club and 44 at the Royalton in New York and the Blue Door at Miami’s Delano, is no stranger to the restaurant-within-a-hotel business. He also created the highly acclaimed Town and Country, both in hotels, and remains chef of the Water Club at The Borgata in Atlantic City. He appears frequently on the Food Network shows “Chopped,” “24 Hour Restaurant Battle” and “The Best Thing I Ever Ate.”

The Lambs Club is located on W. 44th Street in the Stanford White-designed former home of its namesake, a professional theater club where actors and entertainers gathered. Restored under the direction of Thierry Despont, the structure combines the glamour of early 20th century travel and the tradition of Empire Deco in an atmosphere of understated luxury. The restaurant features a fully restored 18th century French limestone fireplace, black and white photos of the original club members and other Broadway personalities, bright chrome light fixtures and hand-crafted leather banquettes. Overlooking the 80-seat space is a 65-seat mezzanine-level bar that offers an all-day menu to accommodate meetings, afternoon tea, pre-theater snacks and late-night dining.

Zakarian’s signature Modern American touch is evident on the breakfast, brunch, lunch and dinner menus. He partnered with David Rabin, Will Regan, Jeffrey Jah and his wife, Margaret Zakarian, on the launch.

A few blocks away, the Rockwell Group-designed National opened its doors in early November. Set in a 1927-vintage hotel at the corner of Lexington and 50th Street, it’s modeled after the traditional European grand cafes, but tailored to New York’s unique culture and clientele.