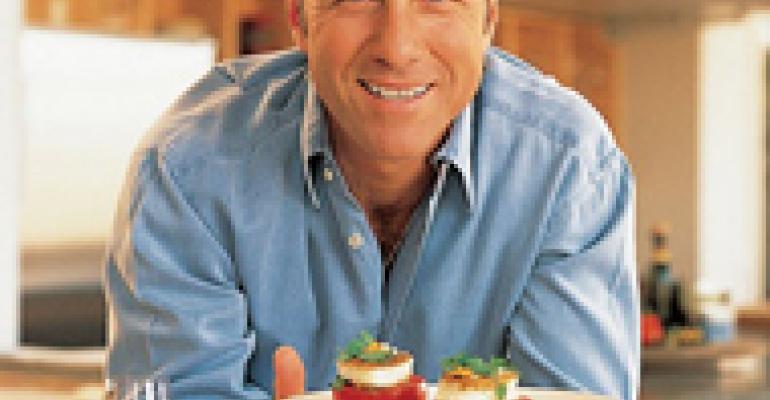 A Napa Valley Tastemaker Now Makes Something You Can Actually Taste

You think you’re under pressure when you open a new restaurant? Consider what celebrity chef Michael Chiarello had on the line when he opened Bottega in Yountville, CA, early last month: A carefully constructed business empire that includes lifestyle retailer NapaStyle (six stores in California; a mail-order catalog sent to millions of homes nationwide), two TV series (Easy Entertaining on the Food Network; NapaStyle on the Fine Living Network), a quintet of cookbooks and Chiarello Family Vineyards. If you had all this going for you, would you really need the headaches and time commitment that come from feeding wine country tourists in a seven-days-a-week restaurant? And what if it flops?

For the past several years, Chiarello has enjoyed full celebrity chef status despite having no connection to any working restaurant. It’s not that he wasn’t good at restaurant work. At one time, he was a star. Chiarello was founding and executive chef of the beloved Tra Vigne in St. Helena, CA, and has held executive chef posts at Caffe Museo in San Francisco, Ajax Tavern in Aspen and Bistecca in Scottsdale, AZ. In 1985, Food & Wine named him Chef of the Year. It’s just that he got involved in other culinary activities along the way, parlaying one venture into another and winding up with a collection of food and lifestyle businesses that would make Martha Stewart envious. It seems like he’s been around forever, but he’s only 46.

Chiarello has proven to be particularly adept at the nonrestaurant side of the business. No chef has ever made cooking seem as alluring and easy as Chiarello does on his TV shows. On them, he seamlessly glides through two or three items per episode before serving them up to a group of well-dressed guests who typically appear to be have been teleported from a Ralph Lauren photo shoot directly into Chiarello’s kitchen. His shows peddle a wine country lifestyle, and Chiarello soon discerned that he could sell other items that are part of it beside food. He founded NapaStyle in 2000 as the vehicle to do so.

Here’s how NapaStyle describes itself. “NapaStyle, Inc. is a multi-channel media and specialty retail company. It expresses a unique style of living, inspired by the Napa Valley, through its original, lifestyle based content and specialty products designed for kitchen, home, garden and entertaining. NapaStyle will mail over 13 million catalogs a year and supplements this with email and Internet affiliate programs.” If you’ve ever dreamed of turning yourself into a personal brand, this is what you’re shooting for.

Then again, you have to move the merchandise. Given the current economic climate, how lucrative is it to mail out 68-page catalogs that are full of markdowns galore? For example, the latest catalog includes items such as leather ottomans that go for $1,798, microplane salt graters that cost $28 apiece, and personalized barrel ring lazy Susans that will run you $148. Chiarello’s catalog is full of great stuff that people want, but do they actually need it? High-end retailing is a tough, tough business to be in right now.

Which may be one reason a return to the restaurant kitchen had appeal, even though he was careful to site Bottega next to the new NapaStyle store in Yountville. Chiarello says he’s happy to be back behind the stoves.

“The menu I’ve created for Bottega really reflects who I am now as a chef,” he says. “The food still showcases the big, bold Italian flavors I love, but in a more refined style that I’ve developed over the last 10 years.”

That means he’ll be putting out the same type of fresh, seasonally based, flavorful cuisine he did at Tra Vigne. It’s a style that pays homage to both the restaurant’s Napa Valley locale and his family’s roots in the Calabria region of Italy. Reflecting the times, prices are modest for this level of cooking. Starters go for $11-$15, pastas for $15-$18, and entrees range from $23-$26. Chef de cuisine Nick Ritchie does much of the cooking work, but Chiarello handles production in the “Salumeria.” Most of the items on the Cal-Ital wine list don’t break the bank, either, with much of it available by the quartino.

The dining room is a wine country knockout, but it had to be. When you’re in the business of selling furniture and kitchen gear at retail, no missteps can be allowed. There are 90 seats in the indoor dining rooms, plus bar, and 40 outdoor lounge seats and 26 dining seats on the “Terrazzo.”

So how is it going so far? “Mouthwatering,” says the San Francisco Chronicle. More importantly, it brings the retail empire’s sense of place to life: “though myriad failed restaurants have made it easy to dismiss concepts like Bottega as overly-ambitious, personality-driven eateries, Chiarello has created a comfortable space at a reasonable (considering the location, please) price point—a real-life interpretation of the Wine Country style that Michael makes look so effortless on television," says the reviewer at online site Eater SF.

Chiarello’s off to a good start at Bottega. Let’s hope it helps to keep his many ventures afloat until the economy gets hot again.
Recommended Reading