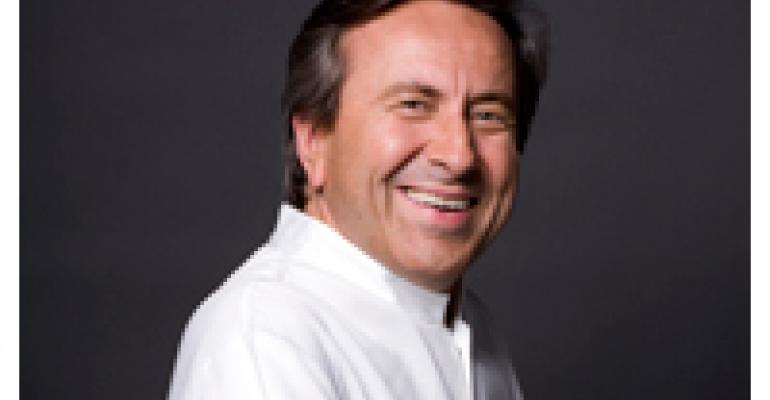 Chef Roy Choi showed the way with Kogi, his now-legendary taco truck in Los Angeles. But three-Michelin-star chefs like Daniel Boulud and Alain Ducasse are going mobile, too, at least temporarily. And they’re not alone, as the concept of chefs taking their food to the streets has suddenly emerged as a powerful new promotional tool for bricks-and-mortar restaurants.

Their initial food truck venture is a one-shot deal for Boulud and Ducasse. They’ll be manning their trucks on behalf of NBC New York, which is launching a new food website called Feast. The promotion’s promise is “four world-class chefs redefine street food at four locations all over the city,” with Corton’s Paul Liebrandt and Marea’s Michael White—high-profile chefs in their own right—being the other two.

How big will interest in this event be? After all, we’re talking about standing in line to purchase a meal and then eating it outdoors on Feb. 8 in a cold-weather climate. The average high in New York City on that date is 38 degrees, the average low is 28 degrees and the record low is -10.

No matter how the weather turns out, the NBCNewYork.com people decided they needed a clever method of crowd control, lest the Twittering masses overrun the event. So while the food will be free, only the 500 or so lucky souls who went on the website prior to the event and aced a quiz about New York City trivia will be privy to it. Their prize was a so-called “golden ticket” that will first tell them where the food trucks will be parked on Feb. 8. When they arrive, the ticket can then be exchanged for a meal from the famous chefs. What’s on the menu? The NBC New York folks promise “each chef will offer dishes never before served on a food truck.”

But NBC isn’t the only organization that thinks there’s plenty of promotional leverage to be had by serving chef-driven food out of food trucks. Just last week, the people who run the NYC Restaurant Week had their truck on the streets. For three hours around lunchtime (11 a.m. to 2 p.m.) between Jan. 25-29, hungry New Yorkers headed for Broadway between 50th and 51st to snag a $6 meal consisting of soup and bread.

All the bread came from Tom Cat bakery, long-time supplier to high-end New York restaurants. Here’s who was passing out the soup:

It was quite a deal for customers, who got to sample food from some of the city’s finest restaurants for a pittance. But it was even better for the NYC Restaurant Week promotion, because the event energized the potential customer base, who were talking and Twittering about it all week.

We can see two opportunities here for chefs and restaurateurs. One involves getting a job to cook for or temporarily lend your restaurant’s name to a one-shot food truck event promoting someone else’s project or product. The other is to publicize your own restaurant or your city’s restaurant week, as New York did. We wrote in our Oct. 5, 2009 e-newsletter about a similar strategy followed by the people who run the Los Angeles restaurant week, and we’re glad New York followed suit.

As we’ve learned from Kogi, if you offer outstanding food and use social networking tools to share the whereabouts of your food truck, hungry fans will come. We suggest you strike up a conversation with a local food truck company soon to see about a rental. Our preliminary check finds rental food trucks available in a surprising number of locations. One word of advice, though: Unlike these two New York ventures, you might want to put your food truck promotion on the road when the weather has a chance to be good. Even Daniel Boulud and Alain Ducasse might have trouble drawing a crowd in a blizzard.