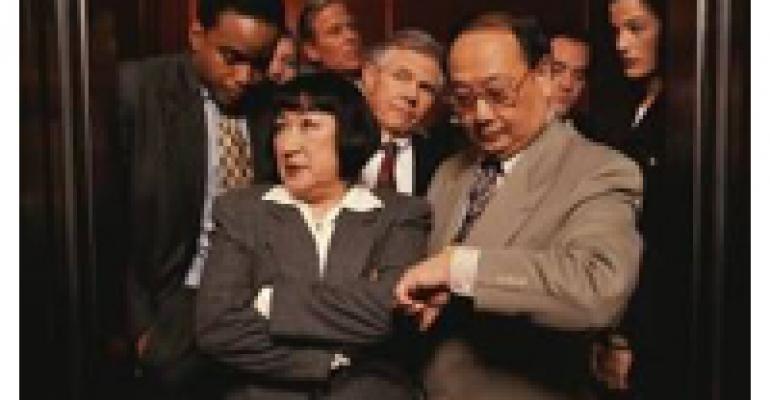 At last. The New York City Department of Health—the people who caused you to purge trans fats from your kitchen and to worry about (or to actually post) calorie counts on your menu—has a new initiative that doesn’t involve restaurants. It’s all about elevators, as in making people use them less and climb stairs more. Finally, they’re acknowledging that personal responsibility and a minimal level of exercise can address health issues just as well as giving restaurant operators a hard time about what their customers voluntarily choose to eat.

Which isn’t to say that the Department of Health (DOH) has changed its colors. It’s still busy advocating against sugar-laden sodas—get ready for the fat tax—and is gearing up to go after salt. Both issues could soon have a big impact on the way restaurants prepare and sell food and drink. But the anti-elevator-riding development shows that the DOH has begun to realize that the actions of the people who consume restaurant meals might have a greater impact on their healthfulness than the actions of the people who run the restaurants.

The benefits touted for the “Burn Calories, Not Electricity” campaign sound impressive:

* Stair climbing burns almost 700 percent the number of calories you burn standing on an elevator.
* Just two minutes of stair-climbing each day burns enough calories to eliminate the one pound an average adult gains each year.
* Men who climbed at least 20 floors a week (about 3 floors a day) had a 20 percent lower risk of stroke or death from all causes, in one study.
* Stair-climbing has been shown to raise good cholesterol and improve cardiovascular health
* A study conducted by Harvard researchers found that men who climbed more than 55 flights of stairs per week had a 33 percent lower mortality rate than those who didn’t.

Talk about low-hanging fruit! You’d think data like this would be enough to convince every New Yorker that taking the stairs is the way to go. But the New York City DOH isn’t waiting around to see how well its climb-the-stairs argument is received. Instead, it’s looking for ways to compel this behavior.

One is to simply post “Burn Calories, Not Electricity” signs near stairwells across the city. A second is to encourage builders to build attractive stairways that draw people in. LEED credits will be given to developers who include this feature in their projects. They might also receive “zoning bonuses” if they do—i.e., friendlier treatment from city construction officials.

A third strategy addresses what we might call the elevator-riding experience. This is what Karen Lee, deputy commissioner of the NYC DOH, recommends: make elevators smaller and slower so that they are more of a hassle than simply taking the stairs. She dubs this the “naughty strategy.” Getting buy-in won’t be hard, because many New York City landlords have been with this program for decades, the better to discourage electricity use.

A final option: Encourage buildings that feature “skip-stop” elevators that provide service to only a few floors. There are three buildings in New York City that currently have these kinds of elevators. One of them, at Cooper Union, is brand-new and stops on just three floors of a nine-story building.

We’ll find out soon how well these initiatives play out among rank-and-file New Yorkers. But for once, restaurant operators are just spectators in a health initiative. Let’s hope it’s the first of many that puts the spotlight on the behavior of customers, not operators.