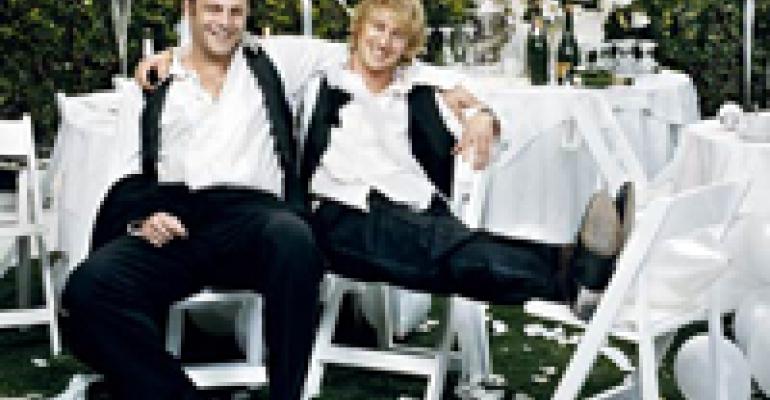 The wedding industry is as close to recession-proof as it gets, but even it is undergoing change as brides and their parents look for something a little more affordable these days. Not necessarily as low-budget as the wedding a couple recently celebrated in a Normal, IL, Taco Bell, but something scaled down from the full-blown formal church wedding/reception center model (U.S. average cost: $28,732). Which is why some less-traditional organizations, including restaurants, are going after wedding business in new ways right now, aggressively marketing their services to prospective couples by making themselves a hip-yet-affordable one-stop shop. Could your full-service restaurant get in on the action?

Paul and Caragh Brooks spent $200 on their Taco Bell wedding earlier this month. It took place before family and friends as the restaurant continued to peddle gorditas and chalupas at its service counter. The pair sat side-by-side in a booth directly across from the recently ordained-via-the-Internet minister who performed the ceremony.

Getting married in a fast food joint would have been considered scandalous a few years ago, and a few complainers thought the new Mr. and Mrs. Brooks had indeed gone over the edge with their nontraditional approach. But many who saw TV news coverage or newspaper stories about the event thought it was a good idea, as was its price point. The groom's mother certainly did. "This is the way to go—there's no stress," said Kathy Brooks.

As traditions slowly fade away and budgets for big-ticket weddings dwindle, restaurants now find themselves in a good position to garner much more of this business—$100 billion is spent on wedding-related goods and services yearly in the U.S.— than they ever did. Consider what the special events division of Chicago's Lettuce Entertain You Enterprises (LEYE) will be doing next month to show off its 20 restaurant properties to prospective brides and grooms.

On Feb. 15, LEYE will host its first annual Bridal Fair at its new downtown Chicago restaurant, HUB 51. Guests will sample cuisine and cocktails from all 20 LEYE restaurants while learning how the LEYE special events crew can help them set up every aspect of their wedding from showers and rehearsal diners to the ceremony itself and post-wedding brunches.

The LEYE people have invited some of Chicago’s top purveyors of other aspects of the wedding experience (photographers/videographers, cake specialists, honeymoon travel agents, etc.) to help attendees sort through the many purchasing decisions that surround a wedding. A special touch on this day-after-Valentine’s Day affair: “Photographers will snap free engagement photos for couples. An ordained minister will be on hand should any couple be compelled to tie the knot in the Chapel of Hub,” the LEYE folks say.

The three-hour event is free, as is its valet parking. Participants will leave with well-stocked goodie bags, too.

Wow. Do you think people will come? We’re guessing the event will be mobbed. Do you think LEYE will pick up a ton of business? It seems like a slam dunk to us. But more importantly, do you think your restaurant could do something similar?

If you’re a member of your local group of independent restaurants, why not see if your fellow area restaurateurs would be willing to partner up and pitch in on a restaurant-specific bridal fair? All those “Restaurant Week” promotions show how much business and attention can be gathered when independent restaurants work together. A bridal fair might be the logical next step. The business is out there, but it’s unlikely you could get much of it on your own. Be sure to go to www.brides.com/planning/receptions/feature/article/8697 for a full run-down on what brides will be thinking about when they consider holding their wedding in your restaurant.

We’re guessing that LEYE is going after wedding business because they think their restaurants have plenty of what prospective brides look for, and they further sense there’s been a shift in thinking about where and how marriages can be conducted.

How big a shift? The best evidence comes from New York City, now hoping to become the city of choice for destination weddings. “We’re taking Las Vegas on,” First Deputy City Clerk Michael McSweeney told Reuters. “The city hopes to advance New York not just as a tourist destination, but as a marriage destination.”

To that end the city earlier this month unveiled its new Manhattan Marriage Bureau, now located in a standalone building near City Hall. Courtesy of a $12.3 million renovation, the once-cramped and drab facility has been transformed into an attractive and accommodating 24,000-square foot-space. It’s user-friendly: Brides, some of them in full gowns, no longer have to pass through metal detectors on their way to the ceremony and grooms can now put the $35 marriage license fee on a credit card. Couple can download wedding music onto an iPod and the chapel clerk will play it while they get hitched.

Right now, Las Vegas is the king of quickie marriages, issuing 109,000 licenses in 2007. Manhattan did just 21,000. Keep your eye on these numbers when the 2008 and 2009 figures are released. They will be more testimony that change is underway in the marriage market, and it’s a change that savvy full-service operators can exploit.
Recommended Reading