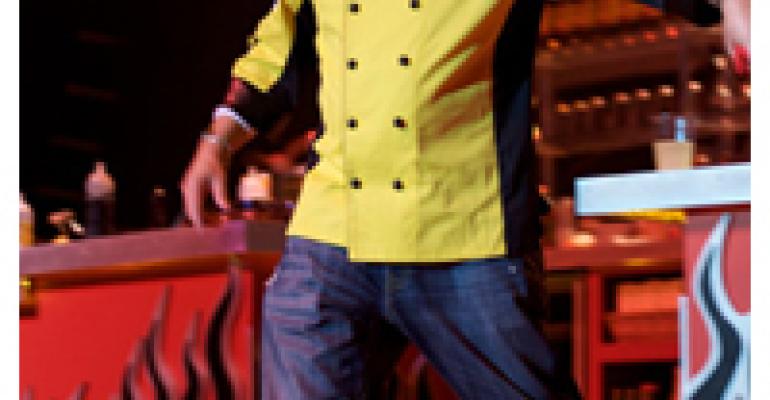 No Conan, Less Leno? Guy Fieri To The Rescue

Now that “Tonight Show” host Conan O’Brien is out at NBC and Jay Leno is headed back to his old late night time slot, how is the network going to fill up the five weekly hours of programming left vacant by the failed Leno-in-prime-time experiment? Part of it will go to chef and Food Network personality Guy Fieri, who’ll be morphing into a game show host for “Minute To Win It.” His prestigious time slot: 8-9 p.m. on Sunday nights.

Now we’re beginning to see why those who advocate for chefs and restaurant operators to turn themselves into a “personal brand” are so big on media training. In 2006, Fieri was just another guy with a restaurant before he submitted his audition tapes to “Next Food Network Star.” Now, with three TV series on his resume and having just completed a 21-city live cooking tour, Fieri is moving onto an even-bigger stage: prime time network TV. But this time, there’s no cooking involved.

Here’s how the network describes his new show:

“All-American chef and television personality Guy Fieri ("Diners, Drive-Ins and Dives") will host NBC’s new game show “Minute to Win It” as it debuts on Sunday, March 14 (8-9 p.m. ET). Fieri will serve as master of ceremonies and will lead competitors through a series of simple, yet nerve-wracking games that can reward them a $1 million prize. Over eight one-hour episodes, competitors will face 10 challenges that escalate in level of difficulty using everyday household items. Each game has a 60-second time limit and failure to finish the task on time will eliminate the contestant. At various points throughout the game, the contestant can walk away with the money earned up to that point - but it'll take nerves of steel to complete all 10 tasks to win $1 million.”

We hope this new venture works out for Fieri. But don’t feel bad for him it it doesn’t. He still owns five restaurants (three Johnny Garlic’s, two Tex Wasabi’s), he’s keeping his ties to his Food Network shows, and he’s got plenty of other irons in the fire.

As for his live cooking tour, here’s Fieri’s report.

“What a wild ride! 21 cities in 30 days is nuts! But make no mistake about it…we rocked the culinary world big time and got to meet thousands of the coolest fans on the planet,” he says on his website. “We will see you again on the next tour…stay tuned…we're just getting' started!"

Indeed. Fieri was already filling up 2,000-seat venues, or bigger, on his last tour. He might become an arena-level act if he becomes a star as a prime-time game show host. Give the guy credit; this is something game show legends Alex Trebek or Pat Sajak couldn’t dream of pulling off.