Where shall we meet? At Bumble’s new restaurant

The dating and networking mobile app Bumble — known for its female-friendly interface that lets women initiate contact — is branching out into the restaurant business.

After hosting a series of successful popups called Hive in markets like Los Angeles, New York, and Toronto designed to bring the dating app into the real world, the Austin, Texas-based brand announced it would be opening a café and wine bar called Bumble Brew in New York City’s SoHo neighborhood this fall, Bloomberg reported.

Related: The evolution of the modern dinner date

The concept will be a collaboration with Delicious Hospitality Group and chef Ryan Hardy, known for the concepts Charlie Bird and Pasquale Jones in New York.

The 70-seat Bumble Brew will operate as a coffee shop during the day before transitioning to an affordable wine bar with small plates at night.

Much like the Hive popups, Bumble Brew is touted as a safe space for people to meet their dates, friends or professional connections made through Bumble platforms. The concept will also host women-friendly networking events and parties for users who want to meet up in real life. 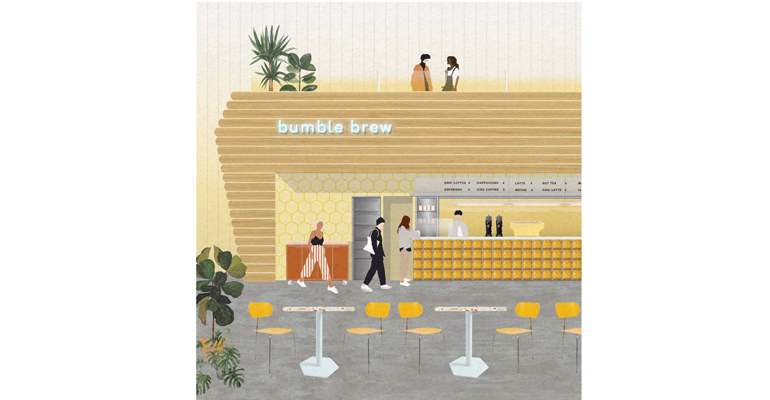 Although specific details about the menu and ambience are still unknown, Bumble chief of staff Caroline Ellis Roche told Bloomberg that during the day, Bumble Brew would serve pastries and coffee provided by Delicious Hospitality Group’s Legacy Records, a Mediterranean-influenced concept near Hudson Yard.

At night the café would feature “date-friendly” food, like Italian cold-cut sandwiches and farro salads, but “no spaghetti — nothing that would be awkward on a first date,” Roche said.

That means that chicken wings, messy burgers, or overly pungent foods will not be making an appearance on the menu.

Plates will range from $12 to $15, with a wine list curated by Delicious Hospitality partner Grant Reynolds and ranging in price from $12 to $16 per glass, along with bottles and beers on tap. The restaurant will also emulate a fast-fine operating model where customers will order at the counter and servers will roam the tables refilling drinks.

Bumble chose New York City because it is their largest and most-active market, with more than 40% of its 60-million userbase residing in Manhattan. If this first location is successful, Bumble plans on taking the concepts to other markets like Austin, according to Bloomberg, and the company will be set to roll out other Bumble Brew locations once they open their new headquarters in 2020.