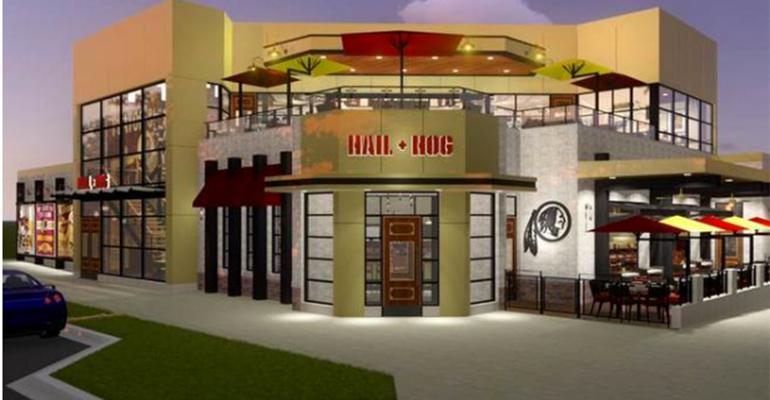 Sports bar and casual dining operators in metropolitan Washington DC will have to deal with a deep-pocketed new competitor when Hail Hog Kitchen & Tap opens in Loudoun County, VA this spring. The 12,000 sq. ft. operation is owned by the Washington Redskins, one of the wealthiest teams in the National Football League. The club hopes its restaurant venture will become the go-to gathering place for its legions of fans—fans who have been patronizing similar restaurants nearby.

No matter how well or poorly it does, Hail Hog—more about this name later—should never be strapped for working capital. Forbes ranks the Washington Redskins as the third most valuable franchise in the NFL, behind only the Dallas Cowboys and the New England Patriots.  The magazine pegs the team’s current value at $2.85 billion, with 2015 revenue of $439 million and operating income of $124.9 million.

With this kind of money pouring in, it’s hard to see a single-unit sports bar/restaurant venture moving the needle on the team’s financials. But Hail Hog does have a role to play in monetizing the Redskins brand. The team’s revenue per fan metric (local revenues divided by metro population) stands at $39. That number could get bigger in a meaningful way. A large number of Redskin fans probably can’t afford to attend a home game in person (average Redskins ticket price: $108). But they would have the funds to grab a sandwich and a beer at Hail Hog Kitchen & Tap from time to time.

Fans will have a choice of experiences when they visit this new two-story operation.

“With a chef-driven menu, the downstairs will feature a prominent bar showcasing unique hand-crafted cocktails along with an extensive wine list and the best local craft beers. The menu will focus on locally sourced products prepared fresh daily,” the club says.

The lower level also houses a radio and television studio. The Redskins intend to broadcast shows and hold press conferences in this space. It will also be available for events.

Hail Hog’s upper level aims to be a sports bar on steroids. According to the team, it “will be any sports fanatic’s favorite spot. With wall-to-wall next-generation 4K televisions, the viewing experience will be second to none. The upstairs will also feature a rooftop bar with dramatic views of the Plaza at One Loudoun.”

One Loudoun, the lifestyle center of which Hail Hog will be a part, is in Ashburn, VA. It’s close to Redskins Park, the team’s headquarters and training facility. The Redskins play their homes games at FedEx Field in Landover, MD.

Overall management and day-to-day operations at Hail Hog will be overseen by g3 Restaurant Group. The Redskins note that “g3 Restaurant Group is a leader in the hospitality industry known for partnering with iconic sports franchises and legendary athletes to create one-of-a-kind destination restaurants.”

The next two g3 ventures were themed to NFL teams, not individual players. Indianapolis Colts Grille is located near Lucas Oil Stadium in downtown Indianapolis, while Houston Texans Grille is part of Houston’s Citycentre Plaza, a lifestyle center. The Texans play their games at NRG Stadium, 17 miles away.

Given g3’s track record, Hail Hog has a great chance of success. One possible drawback might be the restaurant’s name.

The club explains its thinking this way: “The name Hail Hog pays homage to the history of the Redskins and their longstanding anthem, ‘Hail to the Redskins,’ along with a tribute to their storied offensive line of the 1980s and early ’90s, ‘the Hogs.’”

Older fans might make this connection; younger ones may be mystified.

It’s an unusual name choice as far as branding goes. Ideally, you’d want to go with “Washington Redskins Grille” to emphasize the team connection. However, ongoing protests over the term “Redskins” may have made that name a nonstarter. In 2014, the U.S. Patent and Trademark Office’s Trademark Trial and Appeals Board declared the team name to be “disparaging to Native Americans.” Because federal statutes do not allow offensive terminology to be trademarked, the Redskins lost trademark protection for six of their trademarks.

The team can still use the name, but can no longer register it as a trademark. Further legal wrangling ensued and the Redskins have appealed this decision. The restaurant’s name could be changed at a later date, but for now, the team is going with Hail Hog. This lowers the restaurant’s branding profile just a bit. But, given the NFL connection, it’s hard to see Hail Hog as anything but a cash cow for the club.