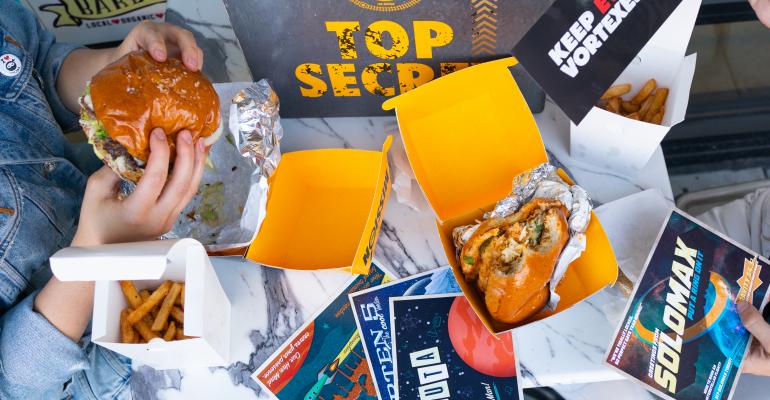 Codename Burg3r
Codename Burg3r players will receive their food with a "top secret" dossier like this.
Trends>New Restaurant Concepts

Codename Burg3r and Vampire Dot Pizza deliver takeout with a side of arcade games, puzzles, and missions

During the height of the pandemic, one of the restaurant segments that suffered most from shuttered dining rooms was the eatertainment industry. It seemed nearly impossible to translate the experience-based meals of arcade games, bowling, laser tag and nightlife to off-premises-focused pandemic-era dining. But Josh Sugarman and Kara Wheeler — the brother-sister duo behind virtual concepts Vampire (dot) Pizza and Codename Burg3r are trying to bring eatertainment experiences home with what they’re calling “dinneractive” experiences.”

When customers order from Codename Burg3r (choosing from the relatively simple menu of burgers, a chicken sandwich and vegan sandwich), they also get to pick one of several missions with the Bureau of the Unexplained, featuring battles with aliens, time travel, monsters, wizards, and more. The meal comes with a QR code, which customers can use to unlock their virtual mission, which — according to Sugarman — plays like a cross between an arcade and escape room with a lot of multimedia components. The missions take on average 60-90 minutes and come with real-life prizes, like coupons for your next order.

“Once you get past the immersion and the story, the physical product is like Dave & Buster’s in a box,” Sugarman said. “You’re getting a fully immersive arcade that you can play from wherever you want. […] It's creating those magic moments around food delivery that makes this really special.”

Codename Burg3r has been in a beta test phase since launching in Los Angeles in July. It’s the second concept for Sugarman and Wheeler, who started a similar “dinneractive” at-home experience, Vampire (dot) Pizza as a popup in Los Angeles, Las Vegas, and Philadelphia last spring when the pandemic began. For both concepts, they work with local pizzeria and burger shops well-known in the area in a ghost kitchen, revenue-sharing partnership and use DoorDash as a delivery service. For example, in Philadelphia, they worked with Stephen Starr Restaurants to create the pizza for the Vampire (dot) Pizza experiences.

“We would like to say it's better than being part of [third-party delivery] because we give the restaurant as much of the profits as possible,” Sugarman said. “Our goal is to get to a place where we can give the restaurant 100% of their food money, but we're not quite there yet. We want to sell our experiences and we want the restaurants to sell their food.”

Vampire (dot) Pizza will be returning this fall for Halloween season and will continue the story of “Belle and her army of vampires.” They’re also constantly adding new elements, like an instant prize feature. For example, the Codename Burg3r “Harry Potter”-esque mission, the prizes are “real” wands that can be delivered to customers’ homes once they win. For Halloween, they will also be debuting an AR feature that lets customers display augmented reality features from their phone.

The concepts also lend themselves to repeat play value in a loyalty platform. The more people play and win, the more points they earn for discounts on food or prizes in real life. For example, Sugarman said, your pizza box might have a phone number on it, which seems innocuously like just a design element of the food packaging, but then you call the number and it turns out to be an Easter egg that unlocks burger prices from 1955 that’s added to your account.

The puzzles and Easter eggs can also work in the partner restaurant’s favor. In the game, you might find a key that unlocks a chest that’s located at a Stephen Starr restaurant and get a discount to go out to that restaurant in the real world.

“Entertainment and food have always gone well together, and just for some reason no one's brought it into the delivery space,” Sugarman said. “So hopefully, hopefully we're changing that […] We can use the story, the games and the technology to make sure people never have to eat alone again.”