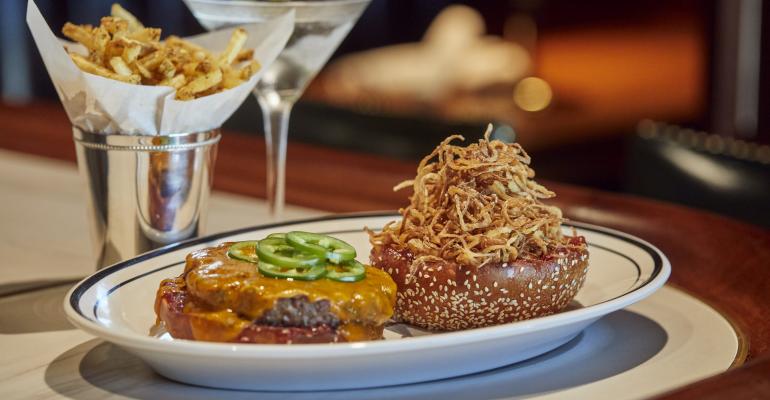 Anchor Bar will debut in 2023, and Lucky’s Chicken gets three more units

Brentwood opened July 7 in North Dallas, taking over the space that formerly housed local favorite, Houston’s. The restaurant is described as an updated take on classic American dining.

“This restaurant location is an icon of Dallas dining, and when we were offered the opportunity to continue the tradition that Houston’s established, we jumped on that offer,” said Hunter Pond, Vandelay’s founder and CEO, in a statement.

Entrée prices start at $17 for the standard burger and the crispy chicken club sandwich, with most dishes falling between $20 and $30. Prices top out at $58 for the San Francisco ribeye.

The global wine list leans American, with lots of Californian bottles, but also offers selections from France, Italy and New Zealand. The cocktail list stays classic, with 10 drinks including a martini, margarita, paloma and Manhattan.

Brentwood is just one piece of recent Vandelay news. The company recently announced a new seafood concept called Anchor Bar that’s set to debut next year, with one restaurant opening on bustling Knox Street in early 2023, and another coming to the Preston Hollow neighborhood later in the year.

The two locations will vary significantly in size. The Knox Street spot inhabits a 2,400-square-foot space that seats 40 in the dining room, plus another 30 on the patio and 14 at the bar. The Preston Hollow location will encompass about 6,000-square feet, fitting 159 seats in the dining room and 20 at the bar. Both are described as embracing a yacht-inspired décor, with mahogany paneled bars and caramel leather booths joined by porthole windows and brass accents.

The Anchor Bar menu is centered on seafood and will include oysters, sushi rolls, diver scallops and miso-glazed arctic char, plus a handful of non-seafood options like a cheeseburger and tenderloin filet.

Vandelay is also planning expansion of its Lucky’s Hot Chicken concept. It opened in East Dallas in 2020, serving a menu of Nashville-style hot chicken and simple sides in a casual space modeled after a retro diner. A second location just opened July 11 in the Webb Chapel area, and two more outposts are coming soon to Richardson and Oak Lawn.

Each of the new stores falls between 2,400- and 2,500-square feet. The Webb Chapel and Richardson locations feature a drive-thru, while Oak Lawn and the original East Dallas restaurant are dine-in only.

A lawsuit filed last year in a Dallas County court by a former general manager of Drake’s Hollywood is still pending. Plaintiff Glenn Govias, who was fired by Vandelay in 2020, in the lawsuit charged Vandelay with discrimination in the treatment of employees and guests, saying company leaders fostered a toxic environment. The company at the time vigorously disputed the allegations, but declined comment for this article.

Attorneys for Govias did not immediately respond to requests for more information.