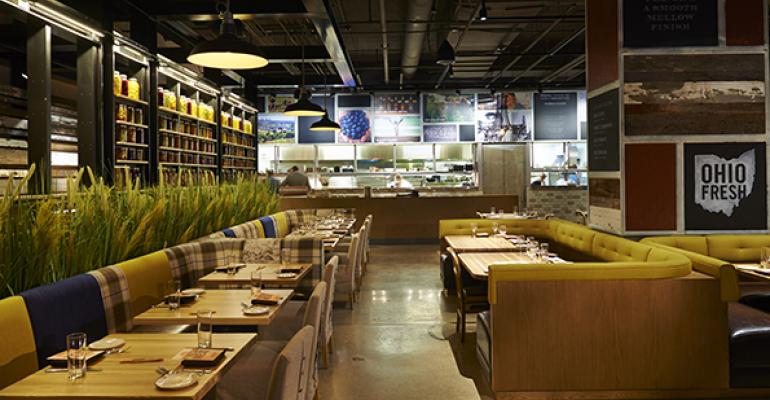 <p>The interior design of Urban Farmer Cleveland came together as planned, with an emphasis on &ldquo;rural chic&rdquo; from designer David Ashen. What was once supposed to be a wall covered with art was left open to offer views of the kitchen.</p>
Trends>New Restaurant Concepts

Cleveland’s rust-belt resurgence didn’t come all at once.

Over the past decade, small neighborhoods around downtown’s perimeter have gone through major transitions. A handful of streets within downtown itself have been rebuilt, each becoming rows of independent dining and nightlife destinations that draw suburbanites to town.

But the process is still very much under way and there are plenty of items on the punch list. There are areas where five-star restaurants sit among foreclosed homes. A new convention center just opened on the north side of town in the financial district, and, frankly, there isn’t much nearby for conventioneers to experience after a long day of meetings.

That’s where Sage Restaurant Group saw an opening, and that’s exactly the crowd Urban Farmer, a farm-to-table steakhouse that opened in late May just a block from the convention center, was hoping to attract. Positioning Urban Farmer prominently on the ground floor of the brand new Westin hotel, operated by Sage’s hotel group, was as strategic as it was convenient.

The plan was to construct a large sign, something highly visible projecting over the sidewalk to let pedestrians know there is, in fact, somewhere nearby to eat. Early designs called for the sign to be 45 feet tall, protrude 10 feet from the building and have a “slightly weathered” look to convey the message that Urban Farmer is “rural chic.”

But when the sign went up, the lights were dim and the intentional rust made the lettering hard to read. More important, a soft buzz began stirring around town that the sign didn’t represent Cleveland’s heritage well, that rustic in Cleveland is not ironic, that it was almost disrespectful or offensive.

Peter Karpinski, c.o.o. of Sage and founder of its restaurant arm, took those whispers to heart.

“We’ve been very conscious and as respectful as we can be to everything Clevelanders are as people,” he says. “When (the sign) went up, it didn’t just not represent our business well, I don’t think it represented Cleveland well. The worst thing that could’ve happened was that someone saw that sign and was offended by it.”

So Karpinski made the call and the sign came down. It took two and a half weeks and a significant chunk of change to get it remanufactured, and now it’s a brighter sign with more color and less rust.

“We wanted Clevelanders to be proud of it and the first sign was not reflective of that,” Karpinski says.

The sign was not the only thing that went wrong during the opening of Cleveland’s Urban Farmer, but it was the most prominent. Other issues—redesigning a wall, expanding a patio at the last minute, clamoring for a delayed liquor license—are the types of small headaches that pop up with every restaurant opening. A couple months into business, Urban Farmer has hit the ground running. Check averages at dinner are around $80 and Karpinski says the restaurant will beat budgeted revenue expectations.

With little competition around the convention center, Urban Farmer is filling up with downtown workers during lunch and convention-goers in the evenings.

“That was the gamble, the risk, and it’s paying off,” Karpinski says, adding that Sage hopes Urban Farmer will draw more from the local community and not rely solely on convention business.

Because economic growth in Cleveland has been slow, its pool of trained, qualified labor can be perceived as small. Sage brought a handful of “task force” employees from Urban Farmer’s first location in Portland, but ran into some roadblocks when it went looking to recruit locals.

“There were challenges with staffing,” Karpinski says, “getting the type of quality that we want; getting them hired, trained and retained.”

Sage started early, hitting the job boards, contacting hiring halls and building a presence on social media. The company held casting calls and interviewed hundreds of people. Managers hired a ton out of the gate, but six weeks in, they were still conducting interviews every day.

The challenges came less on the culinary side and more on the server side, where experienced waiters and waitresses are reluctant to leave an established restaurant for one that is just opening its doors.

“You’re relying on tips, and most good people already have good jobs,” Karpinski says. “To ask someone to leave their job is difficult, but we got a pretty good crew out of the gate.”

Hiring a talented and experienced bar staff was the hardest, Karpinski says. Sage’s corporate team handled most of the training and bar menu engineering. Urban Farmer culinary director Matt Christianson says bartenders have the autonomy to make their own drinks, but the bar staff from Urban Farmer’s original Portland location helped curate the early cocktail menu. Improving the bar service continues to be a focus, Karpinski says.

Just as the drink menu will evolve as experienced bartenders come aboard, the food menu will progress as Christianson and executive chef Brad Cecchi spend more time getting to know local farmers and purveyors in Northeast Ohio. Much of the research has already been done and the restaurant leaders have established some great relationships with Ohio farmers, but the especially brutal Cleveland winter meant seed went in the ground later and therefore will be harvested later.

“Coming into the market, everyone was really gracious and we were well-received,” he says, adding that the menu at Urban Farmer will evolve to feature more local meats and ingredients once the restaurant has been in the market longer.

“There are specialty things people have brought on board for us,” he says. “So we’ll have specialty foods that still retain the specs we need.”

Besides locally raised beef, two standout items at Urban Farmer Cleveland are the charcuterie plates and the selection of world cheeses, which just happen to be the two top-selling appetizers. A charcuterie station sits near the entrance where Cecchi operates a beautiful red Berkel slicer and hangs house-made and artisanal meats in a nearby locker. A month after opening, Urban Farmer was serving a 100-percent housemade charcuterie board, including unique meats like beef tongue.

“Not a lot of people do it,” Cecchi said of the charcuterie, “but we have the facility to do it.”

At dinner, a “cheese steward” wheels a cart from table to table with a selection of local and world selections. Cecchi says when hiring the cheese steward Urban Farmer was looking for someone “quirky and charismatic”—that having the right personality was more important than his or her knowledge of cheese, which could be taught.

Both unique items have been embraced by Clevelanders, Cecchi says.

“The cheese boards are our No. 1 seller,” he says. “We sell more cheese than any other item on the menu. Diners have embraced the concept and have wanted to learn about the cheese; it’s been really great.”

Interestingly, one menu item that Cecchi says is requiring more education than expected is the grass-fed beef. Grass-fed cattle have to work for their food, meaning they often develop more muscle and less fat. The meat is leaner but it’s also hardier, Cecchi says, and guests trying it for the first time don’t expect that.

What's next for Urban Farmer?

It took six years for Sage to open its second Urban Farmer location (Portland opened in the Nines Hotel in October 2008), but plans call for executives to turn up the burner.

Karpinski said there are five Urban Farmer locations in the pipeline, all adjacent to hotels developed, owned and operated by Sage’s hospitality arm. He won’t disclose the locations, but assures they’ll be locally sourced restaurants, as Cleveland and Portland are.

Chances are, wherever an Urban Farmer ends up, you’ll notice the sign.

Follow the series online at www.restaurant-hospitality.com/urban-farmer-undercover as Karpinski and Sage Restaurant Group allow us an inside look at what goes into opening one of their restaurants.