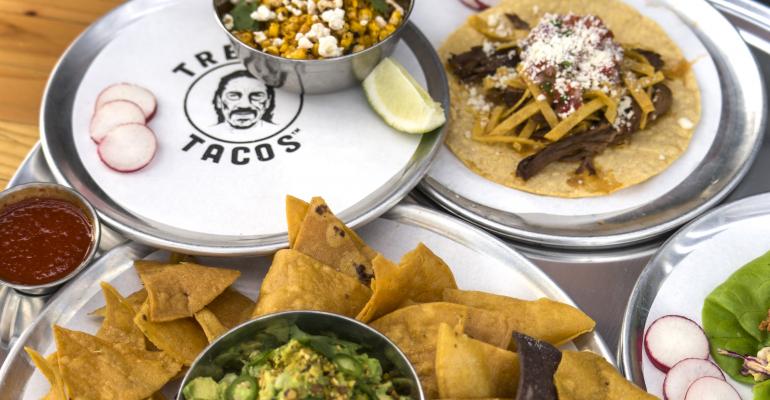 After making a name in Hollywood, actor Danny Trejo is rapidly building a Mexican food empire in Los Angeles that will soon include tacos, coffee and doughnuts.

With partners Ash Shah and Jeff Georgino, who both also come from the entertainment industry, with no restaurant experience, Trejo launched Trejo’s Tacos in early 2016, in a former Taco Bell location.

The first location was fast casual, with a line of premium tacos and burritos created by chef Daniel Mattern, former chef of the L.A. restaurant Cooks County, and loosely based on Trejo’s mother’s recipes. A second 100-seat, full-service location with a full bar, dubbed Trejo’s Cantina, opened last October, in the heart of Hollywood, and expanded on the menu.

A third location is scheduled to open in mid-summer, in the Silverlake neighborhood of Los Angeles, with a fourth to follow before the end of the year in a new University of Southern California mixed-use housing complex that’s under construction. A fifth unit is scheduled for Pasadena, Calif., but the exact location has yet to be revealed.

In addition, in April the partners plan to open Trejo’s Donuts & Coffee, taking over an existing doughnut shop. The coffee will be locally roasted and the doughnuts will “have a Mexican slant,” Shah said.

Under the operating company Larchmont Dining Group, the partners also plan to launch a retail line of hot sauces and sell their in-house-roasted coffee in retail stores.

“We want to be in the Mexican product business,” Shah said.

Trejo hopes to capitalize on a growing interest in contemporary variations of the traditional taco stands and trucks that can be found throughout the city. “The idea was to create a Mexican brand that didn’t compete with the thousands of already existing taco shops across L.A., or even with Chipotle,” Shah said. “We wanted to have a place were we could take our own families, with good, healthy, clean Mexican food.”

For instance, Trejo’s chicken taco is made with high-end Jidori chicken, slaw, chipotle cream and pico de gallo in a lettuce cup, alongside the more traditional carne asada, carnitas and pulled beef brisket. There’s also a build-your-own kale salad, to which guests can add shrimp, salmon, steak, chicken and guacamole.

And there are several vegan options, like the black pepper tofu taco with caramelized shallots, serrano peppers, scallions and pickled onion; jackfruit with tomatillo slaw, guacamole and pico de gallo; and the cauliflower taco with corn, cashew cream, pickled onion and cilantro. The restaurants are open for breakfast, lunch and dinner, and serve traditional horchata, along with craft beer, wine, kombucha and nitro coffee.

For dessert: housemade churros with various sauces, like cajeta, strawberry and Mexican chocolate.

The average check is about $18, with beer and wine, and sales at the original Trejo’s Tacos, which has now been open for more than a year, have exceeded expectations by 75 percent, said Shah, although he declined to give specifics.

Trejo, who is known for mostly villain roles in the “Dusk Till Dawn” series, as well as “Spy Kids,” “Heat” and “Machete,” brings a celebrity factor that will help translate the brand outside the Los Angeles market, Shah said.

“He brings for us a lot of credibility, and makes it newsworthy, and gives us a big social presence,” he said. “But, at the end of the day, you have to deliver good food and good value, or they’re not coming back.”

The partners hope to take Trejo’s to Texas, the East Coast and the Northwest, Shah said, but first they plan to expand beyond Los Angeles into Southern California.

There are no plans to franchise, and so far growth has been organic, he said.

“I hate the word chain. We want to grow the business,” Shah said. “We have ideas about where we want to open, but with that growth comes infrastructure that we don’t have in place right now.”

All photos courtesy of Trejo's Tacos