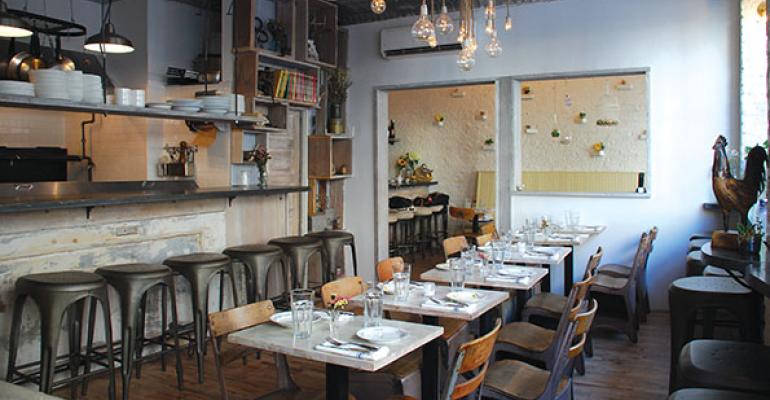 We know what you’re thinking: You want to smack those two because they’re so damn good looking. Well, they’re not just a couple of pretty faces. Bravo Top Chef alums Jeff McInnis and Janine Booth also happen to be terrific cooks and the talent behind a new Manhattan restaurant, Root & Bone.

Set in the East Village neighborhood called Alphabet City, the restaurant serves terrific Southern-style food. It’s the kind of menu that could only come from people who have grown up with or embraced country cooking. McInnis, the executive chef, spent long summers working on his grandparents’ farm in Alabama, where farm-to-table cooking was a matter of fact. At a tender age he learned how to pickle, fry and make preserves and jams from scratch. Back home in Niceville, FL, he worked on fishing boats and could fillet fish and cook seafood beyond his years.

Booth, the chef de cuisine, also grew up in the south—southwestern Australia—on the ocean in Perth. She traveled the world before landing a cooking job in Miami at globally inspired Gigi, where she met McInnis, a executive chef there. They eventually relocated together to nearby Yardbird Southern Table & Bar, which laid the foundation for Root & Bone. Before arriving at Root & Bone, Booth was the sous chef at Khong River House, a Miami restaurant specializing in Thai cuisine. Both Yardbird and Khong River were nominated for James Beard Foundation best new restaurant awards.

“I’m a country boy at heart and my food will always have that foundation,” says McInnis, “but there are so many other influences that I’m interested in exploring and showcasing. We were blessed with phenomenal success at Yardbird and such an open-armed reception to the kind of food I grew up with as a kid.”

At Yardbird, a southern term for chicken, McInnis earned several Beard nominations for best chef in the Southeast. Fried chicken was a signature item at Yardbird and it holds a starring role at Root & Bone.

Holding center court on the menu is Bucket of Bird, which is fried chicken that is sweet tea-brined, fried, “dusted” with dehydrated lemon and spiked with Tabasco honey. Half a bird is $16, while a whole bird costs $32. Adding a cheddar cheese waffle with whiskey maple syrup raises the cost of a half bird to $23, while the whole bird jumps to $46.

Helping McInnis and Booth with pastry is Crystal Cullison, who is preparing classic American desserts such as Banana Cream Pie, Mississippi Mud Pie and Coconut Layer Cake. She’s also creating a daily selection of rotating house-made ice creams, soft serve and cookies. She had previously worked at the restaurants of Emeril Lagasse and Nobu Matsuhisa.

Cleverly, counter space has been set aside in the restaurant and is called The Little Root Market. Customers can eat at the counter or order several menu items from the menu for takeout during lunch and dinner. In addition to the fried chicken, the market also offers sandwiches, including one called Avenue B Tarred and Feathered (which is the fried chicken with bacon, lettuce, tomato, pickles and buttermilk ranch on a potato roll) and Roots & Ricotta (with honey roasted carrots and parsnips, ricotta, tomatoes, toasted nuts and seeds and collard green pesto on country bread).

The overall look of the place was designed by Booth in partnership with McInnis’s brother and sister-in-law, Johnny and Natalia McInnis of SAI Design. The 45-seat interior is divided into three areas, each featuring white brick and subway tiles throughout. Despite the tiles, there’s a farmhouse feel to the place. Ironically, pickled wood from repurposed NYC scaffolding contributes to that look, as do vintage school chairs and bar stools at a six-person chef’s counter.

Playing off the name of the restaurant, bar handles and check presenters are composed of actual animal bones. The main door is refurbished from an old dentist office and whiskey bottles serve as lamps hanging over the four-seat bar, whose façade was built from a reclaimed door.

The food delivered out of Root & Bone’s open kitchen will convince you how talented McInnis and Booth truly are. And it’s okay to stare at them while they cook. They’re used to it.