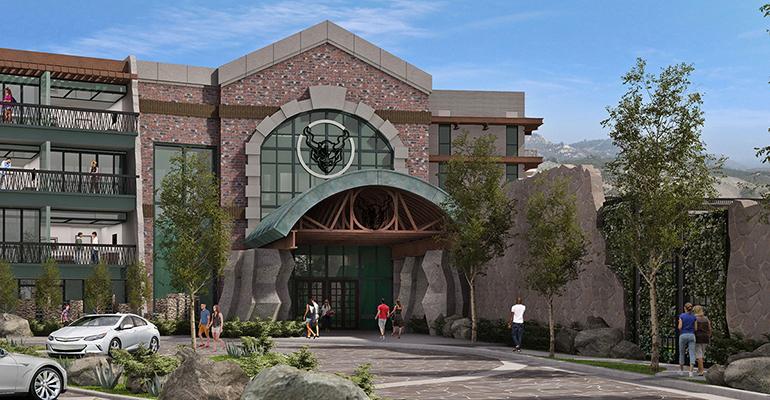 Some observers worry that a proliferation of craft beers and labels — 10 breweries now open for every one that closes — has saturated the market and put a damper on growth. But that’s not stopping San Diego craft brewing pioneer and multi-unit restaurant operator Stone Brewing. It’s ready to break ground on a $26-million craft beer-themed hotel that will test the upper limits of consumer interest in all things beer.

It’s worth watching because Stone, the 10th-largest craft brewer in the U.S., knows plenty about how to leverage its ever-expanding product line, particularly when it comes to restaurants. Upscale bistros, brewpubs, keg rooms, even ballpark and airport outlets are all part of its foodservice portfolio. The takeaway for other restaurant operators from Stone is that the craft brew market is addressable in many different ways.

Now we’re going to find out if that includes hotels.

The Stone Hotel, located in Escondido, Calif., just north of San Diego, will offer 99 rooms and six suites in a 100,000 sq. ft. building. The company promises it will give craft beer fans the hotel stay of their dreams.

“Guests to Stone Hotel will delight in a craft beer experience complete from the moment of arrival,” the company says. “An inlay on the hotel’s driveway artistically displays beer flowing from a tap at the top of the driveway down to Citracado Parkway. Alongside rare historical Stone memorabilia, the watchful eye of a gargoyle will be discretely on guard throughout the hotel, and Stone beers will be available upon a moment’s notice.

“In addition to the normally incredibly wide array of Stone beers that will be on tap, archive special release beers and unique casks will be periodically tapped at the three on-site bars. Hotel amenities will be equally beer centric, epitomized by the availability of a complimentary Stone beer immediately upon check-in and in-room growler delivery service.”

The property includes a pool, fitness center and outdoor walking trails, too, so guests eager to work off their caloric intake will have plenty of options. When they get hungry, they’ll have to take a short stroll to the nearest restaurant option, located across the street at Stone Brewing World Bistro & Gardens in Escondido. But there’s a lot more than typical pub grub available there.

This restaurant opened in 2007 and adheres to a farm-to-table approach. Its menu aims much higher than typical pub grub fare, but doesn’t reach all the way to the esoteric beer pairing tasting menus some operators now favor.  There’s even a special Meatless Monday menu plus an ongoing commitment to the Slow Food movement.

Stone notes that “we are the largest restaurant purchaser of local, small-farm organic produce in San Diego County.” The company also runs a similar restaurant at Liberty Station in Point Loma, Calif. This 23,500 sq. ft. operation adheres to the same principles and has 40 beers on tap, plus 100 additional craft and specialty beers from around the world.

In short, Stone’s experience shows that the craft beer fan market in the U.S. is bigger, has deeper pockets and wider-ranging tastes than industry outsiders imagine and that includes food.

Might that also be true in Germany? The company will find out this year whe it opens a brewery/restaurant complex similar to the original Stone Brewing World Bistro Gardens in Berlin this year. The “soft opening” menu is now available.

Another Stone Brewing Bistro & World Gardens is scheduled for Richmond, Va. Its destination restaurant will follow the same farm-to-table approach.

This beer-themed hotel project is different from, but related in spirit to, the Epicurean Hotel in Tampa. That’s the culinary-themed hotel located across the street from the legendary Bern’s Steakhouse. It seemed like an ahead-of-its-time idea when first proposed, but turned out to be a solid business that produced great synergy between the restaurant and its hotel development partner.

If you want your restaurant to do more with craft beer, keep an eye out on how the Stone Hotel project works out.