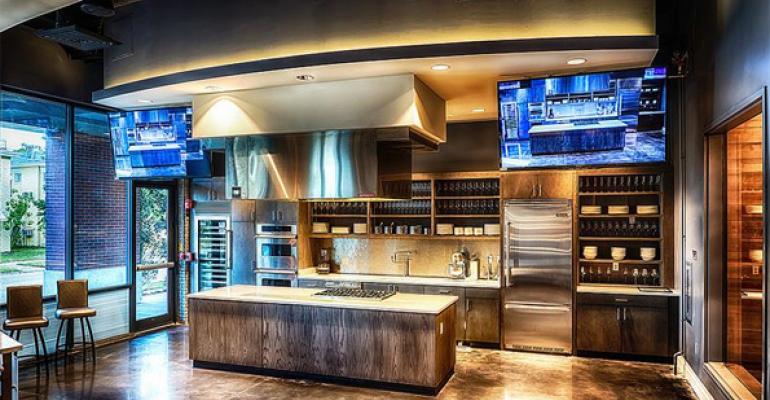 High-profile chefs including Nobu Matsuhisa and Charlie Palmer have already branched into hotel ownership in the U.S. Overseas, Gordon Ramsay has joined the great chefs of Europe in providing both food and lodging with his 10-room York and Albany in London. But it’s the new Epicurean Hotel in Tampa that is demonstrating how a successful independent restaurant can leverage its brand to break into the hotel game.

The 137-room Epicurean, situated across the street from Bern’s Steak House and its sister restaurant, SideBern’s, is a partnership between the iconic restaurant and Tampa-based Mainsail Lodging and Development Group. It’s also a part of the Marriott International Autograph Collection. Bern’s is owned today by David Laxer, son of legendary founder Bern Laxer.

The Epicurean is a foodie-first hotel that comes compete with a 40-seat culinary theater that hosts food and wine classes, its own restaurant, Elevage, a patisserie, Cholocate Pi, plus plenty of other touches that cater to the food-obsessed. Estimates put the final cost of the project at $35 million.

Located in Tampa’s SoHo entertainment district, the Epicurean opened in late December 2013. It’s just one of a handful of restaurant-driven hotels that have opened around the U.S. of late. It differs from the others in that The Epicurean doesn’t depend on the drawing power of a star chef to attract guests, relying on the reputation of its restaurant brand instead.

No question the most well-known chef-driven hotel brand belongs to Nobu. Last month, the chef and his partners in Nobu Hospitality Group announced they will open the luxury boutique Nobu Hotel and Restaurant Chicago in early 2016. The 155-room property will be located in Chicago’s West Loop.

The pace of development for this group has accelerated following the roaring success of its 181-room Nobu Hotel at Caesars Palace Las Vegas. Opened in February 2013, the complex also houses a 327-seat Nobu restaurant. Scheduled to open this year are the Nobu Hotel Eden Roc Miami Beach, the Nobu Hotel City of Dreams Manila and the Nobu Hotel Hotel Riyadh. Expect to see additional properties developed in the future. These hotel ventures have quickly propelled Nobu from a chef with a string of restaurants to an owner of a leading global luxury hospitality brand.

Charlie Palmer hasn’t gone global yet, but his group’s hotel ventures now include the Hotel Healdsburg in Sonoma County, CA; the Mystic hotel in San Francisco; and the Harvest Inn in St. Helena, CA. Palmer, as astute on the business side of the hospitality industry as he is skilled in its culinary aspect, still has plans for the Charlie Palmer Hotel in Las Vegas. Originally announced as a 400-room property during the heady days of the real estate boom, it’s been downscaled to a 100-room boutique property now.

In London, Gordon Ramsay’s cozy inn keeps with the tradition of smaller properties where chefs attach an inn to a signature restaurant. Foodies and luxury travelers there and elsewhere in Europe have plenty to pick from. Perhaps the most outstanding U.S. version of this approach is chef Patrick O’Connell’s Inn at Little Washington in Washington, VA. It offers 18 rooms plus an outstanding bill of fare.

The success of the Epicurean, Nobu, Palmer and a handful of others demonstrates two things. One is just how many foodie and culinary travel enthusiasts there are who seek not just destination dining but also destination lodging, particularly at the luxury level. The other is how eager some hotel developers are to partner with a strong culinary brand when creating their next project. Your restaurant may not offer the star power a Nobu or Charlie Palmer does, but there may be more possibilities to extend your restaurant brand into the hotel business than you think.

Nobu is opening a hotel. Can other operators follow his lead?
Mar 22, 2012