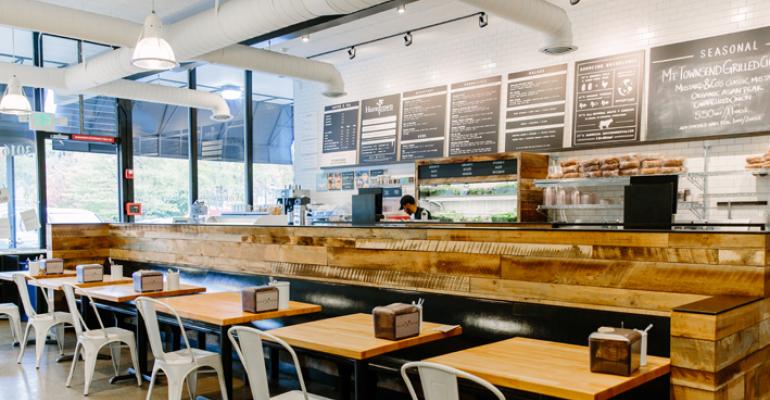 <p>Homegrown is known for its focused menu of sandwiches, soups and salads made using all-organic ingredients.</p>
Trends>New Restaurant Concepts

Sustainably sourced sandwich concept Homegrown is scheduled to expand beyond Seattle for the first time later this year with the opening of the first of four units planned for the San Francisco Bay area.

With 10 units in Seattle, Homegrown is known for its focused menu of sandwiches, soups and salads using all-organic seasonal ingredients, primarily from local sources.

The company operates a small organic farm in the Redmond, WA, area that supplies much of the chain’s produce in season, and employees are given the opportunity to work the fields to help them better understand the farm-to-table connection.

“We try to get every employee out there at least one day per year,” explains Ben Friedman, cofounder and co-c.e.o. “They’re learning the values of organic farming and it helps them inform our guests about what organic is.”

Once the brand gets established in the San Francisco area, the company may look for another farm, but Friedman says farming in California is a much more complex endeavor, given current water restrictions.

Homegrown is positioned in the fast-casual space and serves breakfast, lunch and dinner with an average check of about $11. Breakfast items are available all day.

Sandwiches are available on French, whole-grain or gluten-free bread, baked in house, such as the hot Ham + Beecher’s with ham, beecher’s cheese, caramelized onions, sage aioli and greens; or the TLT with tofu, spinach, cherry tomatoes and roasted garlic aioli.

The sandwich shops are averaging just north of $1 million in sales, says Friedman. They generally run about 1,300 sq. ft., though the concept can go as small as 400 sq ft.

At this point, there are no plans to franchise.

Seattle has one of the nation’s highest minimum wage rates of $12 per hour, but Homegrown applies that wage at all restaurants, even though half of the chain’s units are outside city limits where the rate is lower. That will remain true as Seattle’s minimum wage increases to $15 per hour over the next five years, Gillis notes.

“We see this happening in all the cities we’re considering after San Francisco,” he says. “We think, for business owners, it’s time to get used to the changing wage climate and adapt your business appropriately.”

The company also offers sick-leave benefits, a $25 per week gift card so employees or their friends and family can eat at Homegrown, paid maternity and paternity leave at every level and other wellness benefits, like yoga classes.

Homegrown’s restaurants are also built with sustainability in mind in terms of the environment, from the energy-efficient lighting and compostable paper products, to furniture made from recycled milk jugs.

“We call it growing with purpose,” Friedman says. “The environment is part of the bottom line. We have to think about using our economic system for good, not just financial rewards.”

The partners, who are longtime friends, say they are inspired by leaders like Steve Ells of Chipotle Mexican Grill and Howard Schultz of Starbucks, two leaders who have shaped their respective companies with greater humanity and the environment in mind.

“They didn’t start out that way, they evolved, where we founded our business” with such principles, Friedman says. “We have great respect for what they’ve been able to do at their scale. But we look at ourselves as going beyond.”