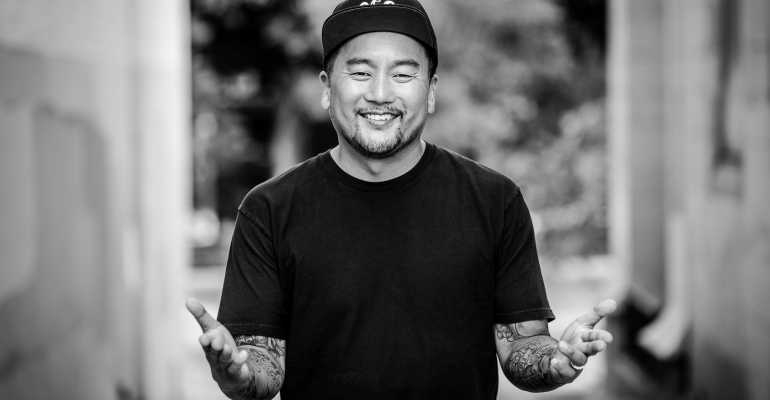 Restaurant will be part of Monte Carlo transformation to Park MGM

Los Angeles chef and restaurateur Roy Choi is planning his first restaurant concept in Las Vegas, scheduled to open at the Park MGM, a transformed version of the Monte Carlo, later this year.

The still unnamed restaurant was described in a press release as being a “multifaceted and multisensory” experience that celebrates L.A.’s Koreatown neighborhood.

“This restaurant will be full of soul and culture that is influenced by the energy of Koreatown in Los Angeles, my hometown,” Choi said in a statement. “We are building this place to celebrate the fans and families that have supported us, and to welcome new friends around the world to the culture, personalities and amazing food experiences born on the streets of L.A.”

Promising “stinky delicious smells and lots of double dipping,” Choi on Facebook posted that the restaurant will have “all the food, culture, DJs, hip hop, life and fun of L.A., and try and find a way to blend that with everything that makes Vegas great.”

The hotel is being redeveloped by Sydell Group and MGM Resorts International, and it will include about 2,700 rooms, more than a dozen restaurants, a 5,300-seat theater, and a casino and spa. It is also the planned location for the Eataly market coming to Las Vegas, as well as a NoMad Hotel, which could mean restaurants by Daniel Humm and Will Guidara.

In the Facebook post, Choi hinted that “our good friends at the NoMad will be there too.”

Sydell is also a partner in the Line Hotel in Los Angeles’s Koreatown, which is home to Choi’s restaurants Commissary, the Pot lobby bar and the fusion bakery CaFé.

“Roy Choi and Sydell Group transformed Koreatown with new experiences that area had never before seen. It’s very exciting to get that dream team back together to create an unforgettable experience at Park MGM,” said Ari Kastrati, MGM Resort’s senior vice president of food and beverage, in a statement.

Locol is scheduled to open next week in a Whole Foods Market in San Jose, Calif. Choi has partnered with Whole Foods previously in other markets by opening his Chego concept in Los Angeles and a Kogi taco location at a store in El Segundo, Calif.

Both the original Locol location in Los Angeles’s Watts neighborhood and the second unit in Oakland, Calif., closed for a few weeks over the holiday season for a revamp.

Time to make adjustments, improvements + some tweaks!!! We’ll be right back — see y’all in 2018! pic.twitter.com/siXeeQMOPy

The concept’s website indicates that the holiday break ended Monday, but it’s not clear when the units will reopen.