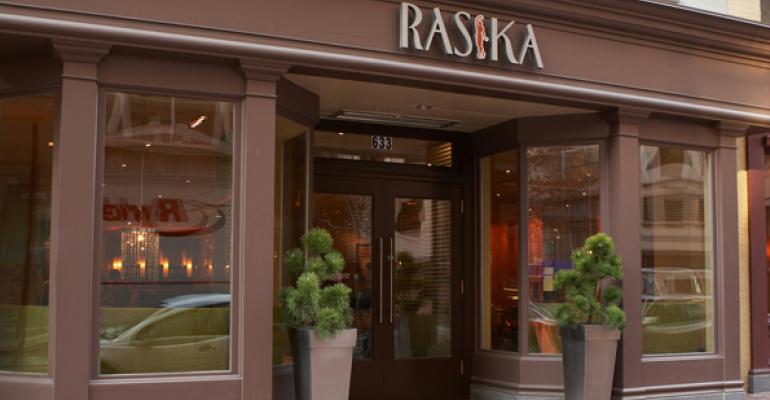 If you come to D.C. looking to catch a glimpse of a famous politician, skip the White House and head across the street to The Bombay Club or The Oval Room. You’ll have a better chance. The Clintons have been regulars for years, even spending their 37th anniversary at Rasika last year, and the Obamas and Bushes have also dined at Bajaj’s restaurants through the years. Hey, there’s a reason this guy was named one of the “50 Most Powerful People in Washington” by GQ Magazine. He’s built an empire that runs the gamut from more classic Indian (Bombay Club) to modern Indian (Rasika’s two locations) to Italian (Bibiana) to American (Ardeo+Bardeo, 701 and The Oval Room). His first restaurant, Bombay Club, opened in 1988, and immediately earned high praise (“One of the best new restaurants in America,” according to Esquire). Bajaj, who was born in New Delhi and came to DC from London, didn’t play it safe and expanded beyond the success of his native cuisine. He’s chosen the right chefs and let them do the heavy lifting. Tony Conte (The Oval Room) and Vikram Sunderam (Rasika) earned Beard nominations this year for Best Chef, Mid-Atlantic, and Bibiani’s Nicholas Stefanelli was a Restaurant Hospitality Rising Star in 2011. Bajaj’s magic touch has earned him Beard nominations for outstanding restaurateur the last two years. You don’t need a secret service detail to dine at one of his restaurants, but you may want to call ahead for a reservation.