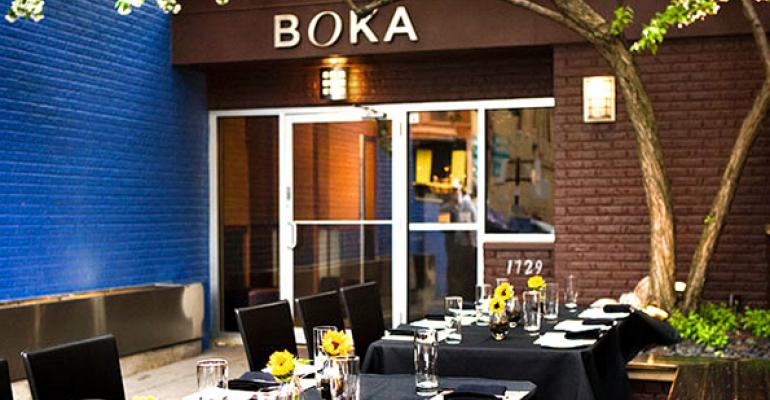 Upcoming projects:
• Three new concepts are planned for next year, including a 14,000-square-foot steakhouse in the West Loop)

“Ask any chef in town, ‘Who would you like to work for?’ and chances are that chef would name Kevin Boehm and Rob Katz, the men behind the hottest restaurant group in Chicago.”—Chicago Magazine. That 2011 quote pretty much sums up the success of BRG. The two top dogs know good food when they see it and they go out of their way to partner with top-shelf kitchen talent. And what a stable of chefs Boehm and Katz (named Restaurateurs of the Year by the Chicago Tribune in 2011) have. At the Girl & the Goat, named Best New Restaurant in America by Saveur magazine, they’ve teamed with Top Chef Season 4 winner Stephanie Izard, who months ago won a James Beard Award for Best Chef, Great Lakes region. At Perennial Virant they partnered with Paul Virant, a James Beard Award nominee for Best Chef Great Lakes, a Food & Wine Best New Chef (2007) and a Restaurant Hospitality Rising Star (2005). Travel and Leisure named the restaurant to its list of the 50 Best Restaurants in America. At GT Fish & Oyster their go-to chef, Giuseppe Tentori, was named Chef of the Year by Chicago Social and the restaurant was named Best New Restaurant of the Year by the Chicago Tribune. You get the point? They have tons of skill in the kitchen, but they also design great-looking, sexy restaurants that they run with the efficiency of sharp-penciled accountants. Is it any wonder how they’ve opened a load of restaurants in the last 10 years and have three more on the way?

Next: Here to Serve Restaurants
Previous: One Off Hospitality Group