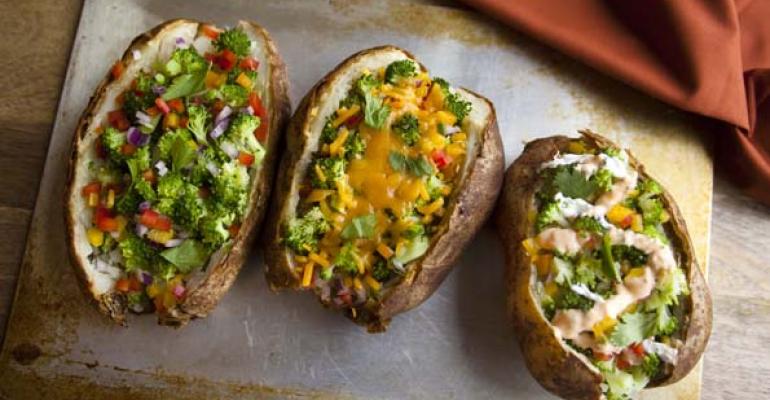 <p>Potatopia customers choose from a variety of toppings: organic vegetables; a protein; cheese; and a signature sauce.</p>
Trends>New Restaurant Concepts

Potatopia focuses solely on the spud

You’ve enjoyed the build-your-own burrito craze, you’ve tried topping your own hot dog, you’ve heard about the Chipotle-like pizza chain and you’re probably by now over the desire to be your own sandwich artist.

But have you heard the one about the restaurant that serves only build-your-own potatoes?

Potatopia, the brainchild of c.e.o. Allen Dikker, is a new-but-fast-growing chain of fast-casual dining spots in New York and New Jersey that focuses solely on the spud. The first location opened in 2011 inside the Menlo Park Mall in Edison, NJ, and a second location opened in 2013 in New York City’s Greenwich Village. And things are heating up: Dikker says he’ll have seven or eight franchised locations announced by the end of this year and 10 to 15 under development in 2015.

“We also have multiunit deals in Toronto and London,” Dikker says. “It’s pretty amazing because we haven’t done a ton of advertising. It’s been almost purely word of mouth.”

Potatopia offers 10 different styles of potatoes—from shoestring and curly fries to au gratin and baked sweet potatoes—and customers can choose from signature meals or can create their own meal. Customers build the potato as they move down the line: organic vegetables; a protein, such as chicken, steak, barbacoa or vegan chili; cheese; and finally topping it all off with one of Dikker’s signature sauces.

Meals average between $6 and $8 and the No. 1 seller is the smashed potato, Dikker notes. “I started making sauces from scratch for my family and the wife and kids said, ‘these are amazing.’ The sauces always tasted really well with potatoes, so that was the initial vehicle to launch my concept,” he says.

Potatopia’s early success, Dikker says, can be attributed as much to branding as to the uniqueness of the concept. Before dipping his toes in the restaurant game, Dikker was an advertising executive. When the economy tanked and clients trimmed their budgets, it provided the perfect opportunity to pursue his dream of opening a restaurant.

“For me, I always wanted to create a brand—a brand that could become a household name,” he says. “With the right food and the right branding, then I could franchise the concept.”

It took Dikker close to three years of business planning before launching the first location. Having no restaurant experience, he needed to learn all the nuances of running a restaurant—the food costs, labor costs, scheduling, etc.—and then had to make it all scalable for growth. He put the first Potatopia in a mall because he wanted to get a good feel for who the customer would be, he says.

“Building a brand, you have to have scalability,” he notes. “It’s a very labor-intensive business. In the beginning you’re working 18-hour days putting everything together. You don’t have to hire a chef as long as (the manager) can read the guides and can operate a kitchen. It’s about organizing all of that.”

Food cost at the two open Potatopia locations has average 28 percent, although Dikker says with some small tweaks he aims to get that a bit lower. He’s continually fine-tuning the menu, recently dropping fresh-cut potato chips, adding additional protein options and switching up the signature sauces. But he wants to keep the options limited to refrain from overwhelming the customer with choices.

Dikker gauged Potatopia’s early success through social media and word of mouth. “If you just browse the social media pages, that’s where you see what people are talking about. That’s the true consumer and that’s what we try to follow.”

Early on, Dikker says he was unsure whether he wanted to franchise Potatopia because he wanted to closely manage the initial growth. Therefore, he says, it was critical for him to extensively vet and choose the right franchise partners.

“I knew if I picked the right franchisee it would be the right growth,” he says.

After early public response in Menlo Park, Dikker began receiving plenty of leads on potential franchisees. He meets with most of them but weeds out partners who have no restaurant experience looking simply to capitalize on the business. The synergies have to be right, he says.

“The franchisees we’ve signed up are multiunit owners who understand food cost and that it’s retail and it’s a lot of hours,” Dikker says. Potatopia partners pay franchise fees in return for support in branding, marketing, social media, training and other operation guidelines. A three-phase training process is divided into one week of classroom training and one week of on-location training.

“I didn’t think it was going to grow this quick,” Dikker says. “It’s important for me to stay a true potato-based concept. When we get compared to potentially the next Chipotle, that’s a huge compliment.”