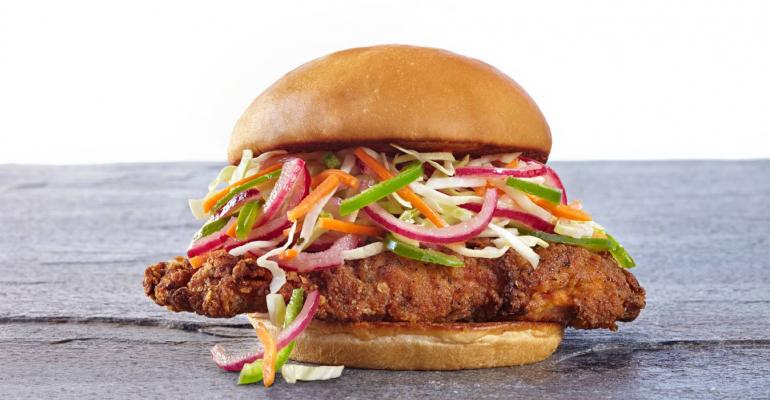 Organic Coup backs up food with a government guarantee

Restaurants don’t need USDA certification to sell organic chicken. For example, a new spot in Miami called Grown—more about it later—that emphasizes organic rotisserie chicken and other farm-to-table organic elements doesn’t have it. But Organic Coup submitted to the USDA’s complex organic certification process, and the concept’s success will in part indicate how much marketing power a certified organic designation might hold for other operations.

Organic Coup, located in Pleasanton, CA, is the brainchild of Erica Welton. She learned how to source natural ingredients during her 14-year career as a food buyer for Costco. It was her decision to seek USDA certification. "I didn’t really understand how few restaurants were certified," she said. "I was shocked to find out that we were actually America’s first certified-organic fast-food chain.”

“I just felt like there's a different level of guarantee when you see that USDA label,” she adds. "There's standards, parameters, there's documentation, there's full traceability and transparency when you have that logo." (Here's what's involved.)

Given the current where-does-your-food-come-from environment, it’s a strong position to be in. The restaurant pitches it this way to customers: “The Coup believes in food that is raised within the organic USDA standards. These standards do not allow Genetically Modified Organisms (GMOs), toxic chemicals and pesticides, or the use of antibiotics or added hormones in livestock.”

These high standards result in a very short menu. A single chicken item–spicy organic air-chilled chicken breast fried in organic coconut oil and served with organic spicy shredded vegetables—can be had three ways: on an organic artisan bun, in an organic multi-grain tortilla wrap or configured as a bowl. All three items cost the same: $8.99. Customers can top them with their choice of organic sauces (mustard vinaigrette, spicy barbecue ranch, sesame ginger and ranch).

The remainder of the menu offers just two items: kid-friendly organic coup tenders priced at $4.99; and, for dessert, the restaurant’s signature organic popcorn that’s covered in caramel and drizzled in chocolate. It goes for $2.99. Beverages? Organic fountain soda and boxed water cost $2.00 each. That’s the entire menu and, yes, there are no fries.

Welton has ambitious goals for Organic Coup. She intends to open 25 additional locations during the next 14 months. The initial unit is housed in a 2,200-sq. ft. space. That is perhaps too big for this style of operation. Future stores will be under 1,000 square feet, she says.

We’ve written before about the rise of better-for-you restaurants in the fast-casual segment. Some, like Amy’s Drive Thru in Rohnert Park, CA, are almost all organic, but offer a much broader menu than Organic Coup. However, there’s no meat on its menu. A different take on this trend is about to emerge in South Florida. That’s where Grown, an organic fast-casual concept backed by ex-Miami Heat player Ray Allen and his wife Shannon, is set to open later this month. “We believe food should be delicious, organic and inspiring,” the couple declares. “It’s not made, it’s not manufactured, it’s grown.”

There will be plenty of organic items on Grown’s menu when it’s finalized later this month. But an equal emphasis is placed on local sourcing to meet the farm-to-fork mandate, with some ingredients coming from the store’s rooftop garden. Chef Todd Kiley, late of the Rainforest Cafe and Legal Sea Foods, is handling menu development for this concept.

The idea is to offer the same items customers expect to find at organic food restaurants, but serve them with the speed and convenience of the QSR experience. Hence the motto: “real food, cooked slow for fast people.” Grown’s hybrid fast-casual format includes drive-thru, takeout and eat-in options. The menu will be broad. Breakfast, lunch and dinner will be priced from $4 to $18. The 1,900 sq.-ft. restaurant seats 38 and its patio holds 42. Expect an organic rotisserie chicken option to be the star of the menu.

How big is the market for responsibly sourced chicken? Mainstream fast-casual and quick-service chains are already aware that some items, particularly chicken, are now being held to a higher standard, even at the lowest price points.

Subway’s current rotisserie chicken offering is billed as “antibiotic-free.” Chik-fil-A began phasing in its “No Antibiotics Ever” commitment in 2014. When Shake Shack introduced its Chick’n Shack sandwich in January, it went with a “cage-free chicken breast—no hormones or antibiotics ever” served on a non-GMO bun. If it’s been a while since your restaurant revisited its chicken sourcing practices, now might be a good time to do it.