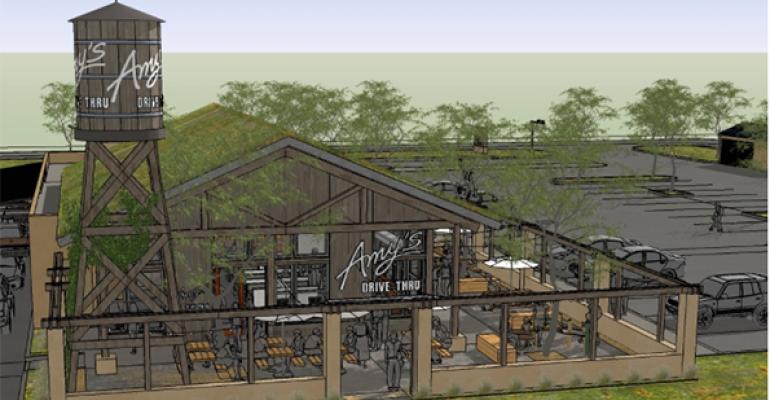 The six major restaurant chains that recently announced plans to remove artificial ingredients and additives from their menus better get going. They have to find high-volume sources of healthful products that pass this self-imposed test, pronto. But the new fast casual concept from frozen organic and vegetarian food maker Amy’s Kitchen already has a leg up on its soon-to-be restaurant industry competitors: an extensive network of good-for-you ingredient suppliers that’s already in place.

Later this month, Petaluma, CA-based Amy’s Drive Thru will open in nearby Rohnert Park, CA. It will serve fast casual food made with the same ingredients parent company Amy’s Kitchen uses to produce its 230-item line of organic frozen food and soup that’s sold nationwide in supermarkets and health food stores, even Target. Amy’s Kitchen has 1,900 employees; 50 of them work with farmers who plant about 25,000 acres of organic crops each year.

So if the future of the restaurant business comes down to who has the best ingredients, Amy’s fast casual concept is in a good spot to win. The question is whether the parent company’s manufacturing expertise will translate into a business where meals are made by hand one at a time.

“About four years ago, we decided to do more of a traditional drive-thru restaurant, but with organic, vegetarian, pesticide-free, and GMO-free food,” Amy’s founder/owner Andy Berliner tells Civil Eats.

Menu offerings, around 95 percent of which will be made from certified organic ingredients, will be familiar to fast food fans. Amy’s Drive Thru plans to deliver its very broad menu—burritos, pizza, shakes, chili, salads and French fries—in about three and a half minutes.

It could make for fast and furious action in the restaurant’s kitchen, because customers can order almost any item in regular, gluten-free, dairy-free and even vegan versions. The target check average: $9. That’s a lot for a drive-thru operation, but keep in mind that despite its name, Amy’s Drive Thru will have a lot of parking and plenty of inside and outside seating.

“The culture is shifting and (Amy's) is going to be a big player in a different way in which the planet is going to eat,” he says. "There's no denying that people go to drive-thrus. That's how people eat. Let's give them at least one choice that's healthy for them and healthy for the planet."

No one can argue with the timing of Amy’s Drive Thru debut. Over the last two months, a half-dozen restaurant chains have publicly pledged to make significant changes to the ingredients in their food.

The list includes perhaps the two most-successful fast casual chains, Chipotle and Panera Bread. Chipotle announced in late April it would no longer cook with ingredients that contain GMOs. In early May, Panera Bread posted a 150-item list of “unacceptable ingredients” on its website. Most are artificial additives. However, Panera Bread has not imposed a GMO ban yet.

Another fast casual giant, Noodles & Company, is on board, too. It announced in early May that artificial flavors, preservatives and colors will no longer be present in its food by the end of September. Pizza Hut will do the same, aiming to have its better-for-you ingredient menu finished by July.

The same thinking prevails at traditional fast food chains, where Subway and Taco Bell have announced similar initiatives. Their timelines call for full implementation by 2017.

Amy’s already has plenty of brand recognition among its many potential customers. If any company has the expertise to pull off a health food fast casual concept, this might be the one.