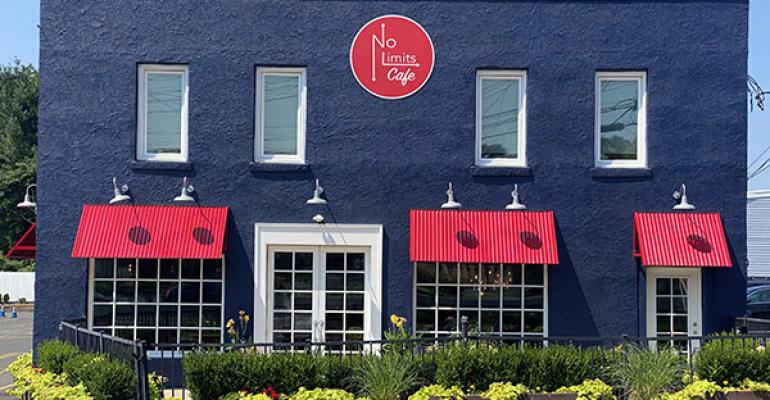 Opened two weeks before the pandemic, New Jersey café No Limits Café helps people with intellectual disabilities find a job. The café was inspired by one couple’s own lived experience with their daughter who was about to age out of the education system and had no job prospects.

Stephanie and Mark Cartier wanted to find a way for their daughter, Katie, and others with intellectual disabilities to find a job and be a member of society – because the Cartiers know she and others like her are capable.

The Cartiers didn’t want to put Katie into a daycare program once she turned 21 and aged out of the school system, so they opened a restaurant.

“We realized that in our area in Monmouth County, New Jersey, there's many many people in the same boat as Katie with nothing to do,” said Stephanie Cartier.

Two weeks after the Cartiers had the idea for a restaurant for people with intellectual disabilities – they had no prior restaurant experience – they saw a TV segment on Hugs Cafe in McKinney, Texas, which was doing something similar.

The Cartiers reached out to the owners and went to Texas to see the restaurant for themselves.

With inspiration in mind and a solid business idea, it was time to build the restaurant. The old building needed many repairs, but the Cartiers had the support of the community behind them, which led to donated services such as electric work and point-of-sale technology platform Clover.

The real draw of the space, however, was the large kitchen. The dining area and kitchen area are around the same size, with the huge kitchen space allowing for wheelchair accessibility and room to move.

No Limits Café trains people with intellectual disabilities in the kitchen and on the floor.

The biggest challenge for Stephanie is learned helplessness, which is when people with intellectual disabilities believe they are helpless due to everyone around them performing small tasks for them their entire lives.

“I didn't think that [Katie] could do it as well as me, and I didn't give her the opportunity,” said Stephanie. “All of our employees, every single one has that. And you know … life is not fair for anybody, but for people with intellectual disabilities, it's less fair.”

At No Limits Café, there is no time limit and workers are allowed to be independent. All workers make their own money, use a knife and operate the POS system, which is something that shocks many local business owners when they walk in.

A local Chick-fil-A franchisee recently asked the Cartiers to help them hire people with intellectual disabilities for five of their stores.

“We want to help people figure it out and do it correctly,” Stephanie said.

Jersey Mike’s, Union Square Hospitality Group and more have all contacted the Cartiers because “they said that they felt that population was missing from their workforce.

“We try to be the conduit for any other restaurant that wants to hire people with intellectual disabilities,” she said.

Part of that is training on the soft skills of a POS system and hard skills like using a knife.

“Everyone gets a knife,” said Stephanie, because she wants the employees to be trained in the kitchen the same way as neurotypical adults.

“We teach them safety and not to get hurt and how not to get burned. But does it happen? Yes. We don't want it to happen. But that's where I'm seeing learned helplessness because nobody asked me ‘Stephanie would you get cut?’ I never worked in a restaurant,” she said.

No Limits Café uses a three-strike system, and employees are suspended after their three strikes are up. Infractions that could lead to strikes include not being in uniform, showing up late or being rude to guests.

“We do it because if our employees ever go to work someplace else, they're not going to be given the chances, and we want them to have the same opportunities that everybody else has,” she said.

When training, employees are given things like cutting gloves and shields when dealing with knives for safety, but no one on staff is still using those tools.

There is a trained chef on staff to help the workers learn skills, but out of the 38 employees, just four are neurotypical.

Staffing hasn’t been an issue at No Limits Café.

“I could staff No Limits Cafe two to three times over with the amount of people that come in here or call or email us every day with an intellectual disability looking for a job,” Stephanie said.

“We're about working and employment and making you feel that you are empowered and a valuable employee, giving you a living wage, and making sure you have the skills to go someplace else anywhere else if you'd like to,” Stephanie said.