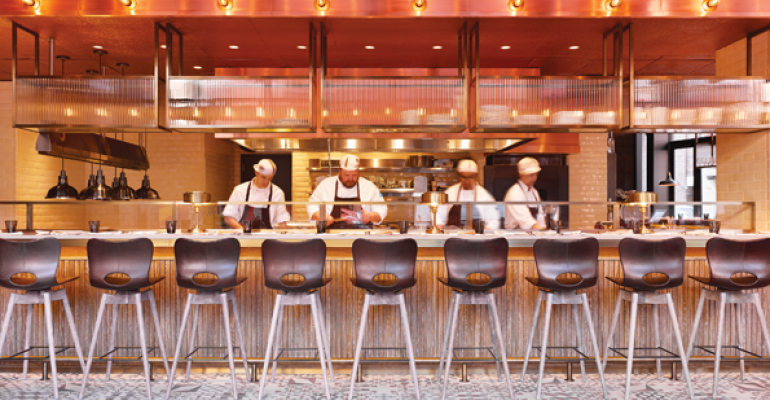 <p>A reservation at Nico is tough to get, but lucky walk-ins can score a seat at the kitchen counter.</p>
Trends>New Restaurant Concepts

The first thing you notice after entering Nico Osteria is two stunning hostesses who greet you with a warmth you rarely get at a hostess stand. And while they ask if you have a reservation, you’re greeted again by a smiling, dapper gentlemen who appears to have jumped off the pages of GQ. It catches you a bit off guard because it’s rare to be welcomed this genuinely anywhere.

Later on, after being seated, you notice that Mr. GQ is a front-of-the house manager who frequently scans the dining room to ensure all is well. When he’s not greeting customers at the door and checking on tables, he’s at the kitchen counter helping servers deliver food. Most customers aren’t likely paying attention to how seamless the service is here at this Chicago restaurant, and after they leave they’ll talk about how great the food is. But for those in the know, the entire experience delivered by One Off Hospitality Group is astonishing.

Anyone who’s ever eaten in this city likely knows this group because it’s behind some of the most legendary restaurants the city has ever known. Its first restaurant, Black Bird, redefined the city’s upscale dining scene by making it hipper and more farm-based than anything before it. One Off also pioneered the highly refined artisanal cocktail trend at its swanky and stylish Violet Hour.

But then its subsequent restaurants—Avec (communal seating wine bar), Publican (contemporary beer hall), Publican Quality Meats (butcher shop restaurant) and Big Star (honky tonk taqueria) signaled a shift to a more casual, easy-going restaurant style that belies its deadly serious approach to food. The country as a whole was moving in a more casual direction, and One Off helped lead the way, perhaps more than it realized.

Knockoffs of all its restaurants began to appear around the country. A good part of that can be attributed to Paul Kahan, a One Off lead partner and culinary god who was named the country’s Outstanding Chef last year by the James Beard Foundation. He’s become a culinary E.F. Hutton of sorts: When he speaks, others listen and follow suit.

And so it goes with 125-seat Nico Osteria, which opened several months back in the Thompson Hotel in Chicago’s Gold Coast neighborhood. Fans of Kahan and One Off have been restlessly waiting to see what they would come up with next, and a seafood-focused Italian restaurant is it. Nico signals One Off’s return to a more refined restaurant experience, while maintaining a casual, easygoing way. It’s a hybrid that combines the best of everything One Off has strived for.

If there are any concerns about the company getting too corporate, consider the restaurant’s name. Nico does not refer to some Italian culinary deity, but rather the 1960s German singer-songwriter who was an Andy Warhol muse and a Velvet Underground collaborator. It’s a clever, subtle trick.

While Kahan is the genius behind the food, it’s his main partner, Donnie Madia, who guides the tone and feel of the customer restaurant experience. That name of the restaurant and the greeting at the door are all Madia, who frequently roams the dining rooms of every One Off restaurant making sure all is well. It’s his party and he aims to please. If that means clearing tables and wiping them down to keep things flowing, Madia isn’t afraid to jump into the fray.

Unlike most multiconcept restaurant companies, One Off Hospitality Group has no strategic plans to conquer to the world one restaurant at a time. In fact, the name of the company implies that every project it does is unique and “may very well be our last,” Madia says. It’s the kind of attitude that may make some at Harvard Business School cheer and many more groan. Sixteen years in the making, One Off is going to do it its way and damn the torpedoes.

This take-it-slow-and-make-it-good attitude helps explain why there are years between the formation of their concepts and why fans are so excited about  whispers of a new restaurant on the horizon. Nico Osteria surfaced, Madia says, after the folks at the Thompson Hotel approached them and other restaurant companies to pitch a new restaurant in the recently renovated space. One Off beat out rivals on the strength of its all-star team and concept proposal. It didn’t hurt that one of the group’s partners, Kimberly Galban, had extensive experience working at the Park Hyatt Chicago. On seven other occasions over the years, One Off has been approached to create a hotel restaurant, but the deals never clicked, says Madia. “Working with the folks at Thompson felt very right.”

Surprisingly, the idea for an Italian seafood restaurant did not come from Kahan, but rather from a young chef whose entire cooking career has been with One Off. Erling Wu-Bower joined the team as a cook at Avec, and then moved up to sous chef at The Publican. From there he crossed the street to Publican Quality Meats where he assumed the role of executive sous chef of both kitchens. He eventually returned to Avec as chef de cuisine.

“When Erling got to Publican and began to take on more responsibility, he approached us and said he had an idea for an Italian seafood concept, “ Madia says. “We said, ‘Whoa, take it easy!’ He brought the idea up again on other occasions and when the Thompson approached us, we presented it to them. Erling is very driven and hungry to grow with us.”

Kahan, Madia, Wu-Bower and other partners traveled to the Puglia region of Italy to explore its farms, butcher shops, bakeries and, most importantly, the Adriatic sea, a source of beautiful seafood. They ate enough crudo (think of it as Italian sashimi) to sink a ship. It shows on the dinner menu at Nico, which features a startling array of 14 crudos, including Striped Jack (with lemon balm, bird chile, radish and citron vinegar, $20), Emperor Fish (with charred ramps and lime gremolata, $18) and Deep Water Fluke (with fermented chile, black lava salt and green almonds, $20).

For his persistence and contract-winning idea, Wu-Bower was given the helm of Nico (as chief de cuisine), which at times must seem a terrific gift and a curse because of the hot bright lights that shine on any of One Off’s restaurants. To hedge their bets, Kahan and Madia sent Wu-Bower to Philadelphia to work under acclaimed chef Marc Vetri, one of the country’s great Italian chefs and pasta makers. The month he toiled there was well spent. Wu-Bower was a James Beard semi finalist for Best Chef Great Lakes region this year.

With Kahan, he’s created one of the city’s most interesting pasta selections, including Garganelli (with striped shrimp, arugula pesto and orange, $19), Smoked Whitefish Triangolini (with fava beans, sea urchin, sorrel and fried shallots, $21) and Saffron Gamelli (with squid, tripe and tomato conserva, $19).

Another part of the menu features a variety of fettunta (bruschetta), including  Grilled Octopus with favetta [broad bean puree], grapefruit and preserved lemon, $15). The antipasti section offers a variety of seafood, but also has something for meat eaters, including Slow Cooked Rabbit (with Hama Hama clams, orange, fennel and nasturtium, $18).

Nico does a great job with whole fish and features three offerings, including Salt Crusted Branzino (with white beech mushrooms and zante currants). Whole fish is charged by the pound. In the case of the branzino, it’s $48 a pound. Main course items include Pan- Seared Red Snapper, $35, Chicken Saltimbocca, $22, and Slow-Roasted Lamb Shoulder, $29.

While One Off has a rising star in its midst with Wu-Bower, it has a full-fledged rock star in its pastry chef, Amanda Rockman. She’s worked with some of the best chefs in the country, including Gale Gand at TRU and Laurent Gras at Michelin three-star L20. Last year, the Chicago Tribune named Rockman pastry chef of the year. Her dessert menu at Nico features 12 versions of gelato and sorbetto, including Burnt Honey Gelato and Goat Cheese Sherbet (each is $3 a scoop). You’ll also find four choices of affogato (think sundae with a shot of espresso), including one called Espresso (with cardamom sweet cream). Each is $11. If that isn’t enough, her dessert menu also features  seven other desserts, including Nico Torte with lemon, pickled blueberry, ginger and citrus poppyseed gelato, $11.

All of this great cooking is served in an L-shaped room with two personalities. The main dining area overlooks an open kitchen with counter seating for walk-ins. The other part, which is referred to as Salon Nico, is a bar/lounge area with an abbreviated food menu and an extensive wine selection. A variety of low-alcohol wines are stocked and its wine mix consists of 65 percent white wines, which is unusual in the states, but quite common in Italy, says Madia.

Because Nico Osteria is part of the Thompson Hotel complex, it’s obliged to serve—along with dinner—breakfast, lunch and weekend brunch. Additionally, Nico also hosts private dining events in a second story space that holds up to 70 seated guests or a reception of 150 people. So far, everything about Nico is going swimmingly, says Madia.

“We’re really proud of what we’re doing at Nico,” he says. “None of our restaurants are driven by ego, but rather how successfully we utilize the space. We’ve incorporated all of our best senses into Nico, and you can feel it, smell it and touch it. You can’t ask for more than that.”