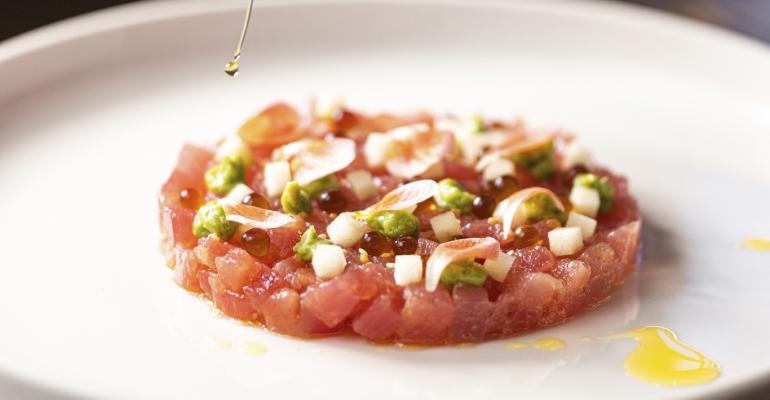 Lexy’s debuts Aug. 15 with a new-American menu and a Champagne vending machine

When Julian Rodarte, 29, was named CEO of Trinity Groves, the dining park had been operating as an incubator, working with young chefs to test out new concepts. Now, Trinity Groves has a renewed purpose and goal to open permanent restaurants that feel like they’ve been around a while and could stick around for decades.

Rodarte opened Beto & Son with his dad in 2016, which has since become Trinity Groves’ most successful concept to date. So, when the time came for former CEO Phil Romano to hand over the reins, he knew Julian was the right person for the job.

The first new opening under Rodarte’s direction is Lexy’s, which is slated to debut on Aug. 15. The restaurant is named after Julian’s wife, Alexa —Trinity Groves’ director of marketing — and is inspired by the couple’s travels to some of their favorite dining destinations and wine regions around the world, including Provence, the Amalfi Coast and Greece.

“We wanted to bring some of these experiences back to Dallas,” Alexa told Restaurant Hospitality.

Julian thinks that the farm-to-table lifestyle and trend is the best vehicle for Lexy’s to highlight the meat and seasonal produce from their favorite North Texas ranchers and farmers.

The team enlisted Aubrey Murphy — formerly of Knife Steakhouse in Dallas who also cooked in Hawaii for five years — to run the kitchen as director of culinary. Appetizers include hot rock wagyu beef, crab and lobster cakes, and brisket-stuffed avocado croquettes. Entrees include a 32-ounce tomahawk steak for two, a 24-hour brined and roasted half chicken, and a whole snapper prepared two ways: tempura-fried and pan-seared. The menu is rounded out with sandwiches, flatbreads, soups and salads.

The star of the cocktail menu is the CBD-infused High Tea made with a blend of chai tea, coffee, and cocoa nib-infused tequila that is served in a vintage porcelain teapot billowing with dry ice smoke. The nostalgic drink was inspired by Alexa’s love of tea parties as a child.

Lexy’s also features a Champagne vending machine that doles out mini bottles of Moët. Guests can purchase bottles of sparkling rosé or Brut Champagne while waiting for a table or order a bottle straight from the menu. In the latter case, servers will give diners a custom token and walk them over to the vending machine, where they can retrieve a bottle before the server opens it and pours it into a glass. At a soft launch, the vending machine was popular with guests, and became the star of many social media posts.

Lexy’s has taken over two former Trinity Groves concepts to occupy 4,700 square-feet of interior space, with 141 seats in the dining room and another 15 at the bar. The 2,500-square-foot patio can accommodate an additional 125 diners.

“The aesthetic is so different than other Trinity Groves concepts, and that was the point,” Alexa said. “We wanted Lexy’s to be fun and lively­ — the kind of place that Dallas people want to hang out in and talk about.”

Trinity Groves is currently home to eight other eateries, including Beto & Son, Holy Crust Pizza, St. Rocco’s New York Italian, Sum Dang Good Chinese, and a sprawling beer garden called Art Park. Several more concepts closed at the beginning of the pandemic and have remained unoccupied, but not for long.

Julian was unable to share specifics yet as trademarks are being finalized, but he said to expect two more restaurants opening later this year and four to six new concepts next year. Each will be driven by the Rodarte’s new vision.

“Beto & Son has been successful, and it’s now a staple of Trinity Groves,” Julian said. “We want the same for Lexy’s, and we want to create more staples […] the kinds of places that can be here forever but are still a launching pad that could grow out of Trinity Groves.”