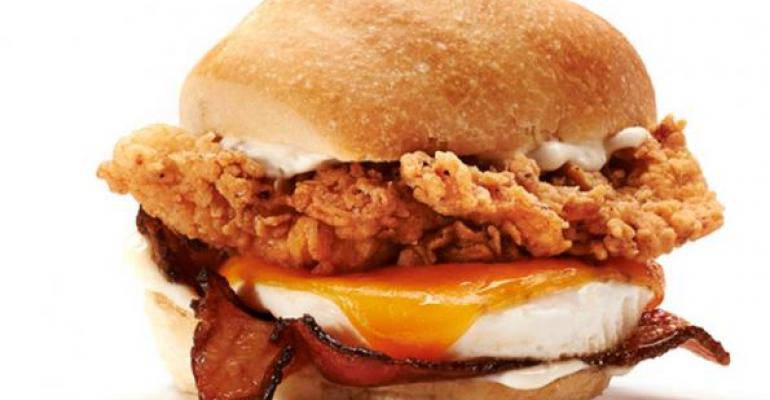 <p>Chicken and eggs are featured in breakfast sandwiches like the Nest Egg.</p>
Trends>New Restaurant Concepts

New Starbird concept aims to improve on the QSR experience

Industry veteran Aaron Noveshen is scheduled to launch a new concept in Sunnyvale, CA, later this month that will attempt to bring the quick-service segment up a notch.

To be named Starbird, the concept will be designed to blur the lines within limited service, offering a “super-premium” menu built around fried chicken tenders with the speed and convenience of fast food.

“We’re calling it super-premium fast food,” said Noveshen, co-founder and c.e.o. of Starbird. “It’s really about the quality sentiment you get in the fast-casual world, with design, comfort, food, ingredient quality and guest experience, combined with the convenience you get with QSR.”

The centerpiece of the menu is a boneless fried chicken tender that appears across a platform of sandwiches, salads and tacos, though grilled chicken is also available. The chicken is a local product from Petaluma Farms, raised without antibiotics or genetically modified feed, and air chilled.

And since eggs come from chickens, Starbird will also offer breakfast with a lineup of breakfast sandwiches, tacos and burritos.

A key aspect, however, will be the concept’s coffee, available hot and iced.

Starbird will use a new brewing system that grinds and brews each cup of coffee to order in less than 90 seconds. The concept will use San Francisco Bay-area roaster Equator Coffee, which is also used in high-end restaurants.

“Credibility in breakfast comes from credibility in coffee,” says Noveshen. “There are few who can do coffee conveniently. At Starbird, you’re going to get super-premium quality at speed.”

Chicken-focused restaurants have been hot commodities lately, with a number of fast-casual concepts cropping up.

Noveshen is a cofounder of the seven-unit polished-casual Pacific Catch chain, also based in the Bay area, which recently won a significant private-equity investment for growth. He is also founder and president of consulting firm The Culinary Edge, which does consulting and menu work for chains ranging from Starbucks to Applebee’s.

“There were some great things about fast food when it first came to market. Nowadays, the guest experience has really eroded,” Noveshen notes. “The drive-thru is not that convenient; it’s not much fun. And, design-wise, it’s a lot of plastic and laminate and materials that aren’t that comfortable.

“So we wanted to improve all the things about fast food that needed improving,” he says.

Rather than a drive thru, for example, Starbird will use technology to allow guests to stay in their cars if they prefer.

Guests will be able to order via app or online and drive into a designated  parking space at the restaurant. The first location will have 17 numbered spots.

Diners can then either come in to pick up at the counter, or stay in their car and click on a button via the app that says “I’m here,” and food will be fired and delivered to the car within three to five minutes.

The 2,000-square-foot restaurant will also have indoor seating and a patio.

Chicken strips are the star of the menu, but variety comes into play with flavors that borrow from Mexico and Korea. Tofu will also be a protein option.

At breakfast, a signature sandwich will be The Chicken & Egg, for example, featuring fried chicken strips, an organic egg and organic American cheese topped with bacon. Breakfast tacos and burritos are also in the lineup, as well as chicken and waffle sticks.

Chicken tenders can also be ordered in various sized boxes, or as a combination meal with fries, tater tots, waffle sticks or slaw.

There will be no fountain sodas, only hand-crafted iced teas, seasonal lemonades and some bottled artisanal beverages, Noveshen says.

Breads will be baked in house. And for dessert: hand-dipped drumstick ice cream cones.

The average check will be about $6 at breakfast and between $9 to $11 at lunch and dinner. “We’re not looking to compete in the $1 meal territory,” says Noveshen.

Noveshen envisions the concept as a chain and a second location  is planned for Foster City, CA.

TCEV has put together a group of investors for the first round of funding and a Series B round is in the works to build the brand’s presence throughout the Bay area.

Franchising could potentially be used to grow the concept down the road, he adds. And he expects more concepts from TCEV, but not until after Starbird is up and running.

“We want to focus our energies 100 percent on getting the first few units of Starbird open before we think about a second concept,” he says.