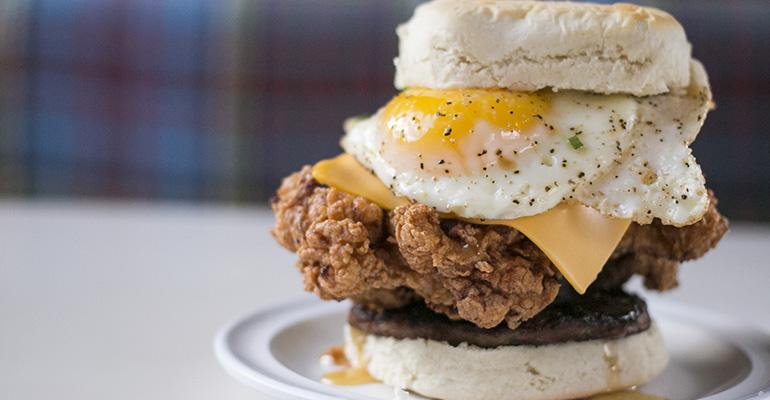 Like the gourmet burger joints before them, chicken concepts get the fast-casual treatment. &bull; See more New Restaurant Concepts

To say that the fast-casual chicken segment is growing is an understatement. Like the “gourmet burger” concepts that began to emerge a decade ago, many operators have found that Americans are interested in an upscaled chicken, particularly of the fried-and-sandwiched-variety, but in other iterations as well: Nashville hot, rotisserie, even nuggets designed for grownup palates. When Danny Meyer’s Shake Shack, for instance, experimented with a limited edition fried chicken sandwich at its Brooklyn unit last July, guests line up around the block to see if the ChickenShack lived up to its hype. Last month the small chain expanded the $6.29 offering to all Shake Shack restaurants.

Meyer wasn’t alone. Other well-known chefs and restaurateurs in NYC and other markets were creating chicken concepts around the same time, and still are. They include David Chang (of Momofuku) with his Fuku fried chicken concept, and Carla Hall with her Cobble Hook hot Nashville-style fried chicken joint in Brooklyn. In Los Angeles, Ludo Lefebvre’s (Trois Mec) LudoBird has expanded beyond its sole outpost at the Staples Center to a second location at Universal’s Citywalk.  In Philadelphia, Michael Solomonov’s Federal Donuts (which does fried chicken, too) now has four units and counting. DMK Restaurants in Chicago, perhaps best known for Michael Kornick’s MK the Restaurant as well as DMK Burger Bars, has also just launched a chicken concept, Arlen’s Chicken, and franchising plans are underway. In Charleston, SC, chef Robert Stehling and his business partner Dave Uecke of the well-known and upscale Hominy Grill opened Chick’s Fry House last summer, marketing their signature fried chicken to a broader audience.

While chains like KFC, Popeye’s and Chick-fil-A have saturated the QSR end of the chicken spectrum, there’s speculation about just how big the fast casual chicken segment—like the gourmet burger segment —could become, and who might become “the next Shake Shack” or “the Chipotle of chicken sandwiches.” In essence, which concepts will emerge to dominate the untapped market for elevated, ingredient-focused chicken in a fast-casual setting? It’s a tantalizing idea for emerging companies, startups and even fixtures of fine dining, and the demand seems to be there: Market research firm NPD Group found that chicken sales at fast-food restaurants grew 3 percent to $5.4 billion for the year ending last March. That was at a steeper pace than burger sales, which were up just 1 percent.

“Chains like Chick-fil-A and Chipotle have helped reshape the industry by demanding antibiotic-free products in the market,” says John Kunkel, c.e.o. of Miami-based 50 Eggs,  which just launched a fast-casual concept called Spring Chicken in Coral Gables. It is the first of four slated to open this year. “Luckily, we already figured out the sourcing with Yardbird (the company’s successful casual dining operation, which sells 3,000 pounds of chicken per week).” For many of the fast-casual operations such as Federal Donuts, central commissaries have saved time and space while still providing the operation with product control.

Kunkel says a fast-casual format gives his company the opportunity to capture more restaurant visits from his full-service customers. And because fried chicken holds well, his staff is able to turn around orders in under five minutes. Spring Chicken saw 1,500 guests the first week it was open. He says the two chicken concepts “have a shared customer, but they have different occasions and look for different experiences” throughout a given week or month.

Here are a few  concepts that have opened recently:

John Kunkel, c.e.o. and founder of 50 Eggs, (one of Restaurant Hospitality’s 25 Coolest Multi-Concept Companies) is expanding its portfolio with Spring Chicken, a fast-casual iteration of the company’s full-service fried-chicken-focused YardbirdSouthern Table & Bar. Four locations will open this year in Southern Florida. Offerings include Blue Plate Specials with fried chicken, biscuits, waffles, mac and cheese and mint-seasoned watermelon. While Kunkel says that Spring Chicken has the potential for national and international expansion, “I’m conscious of our reputation and our ability to engage customers. Shake Shack did a great job rolling out in ‘influencer’ cities…and achieving very high gross sales per unit by making them special. We keep that (model) in mind.”

Chicago multi-concept operator DMK Restaurants (DMK Burger Bar, MK the Restaurant, and also an RH25 Coolest Multi-Concept Company) has just entered the fast-casual chicken arena with Arlen’s Chicken in Evanston, IL. “With a few exceptions, fried chicken was stuck in fast food mode…There weren’t many hospitality- and chef-driven casual chicken restaurants,” Michael Kornick explains. “It’s a fun way we could add our culinary instincts to another segment of the market.”DMK chose to focus on “nuggets,” as a point of differentiation wings and tenders, served with house-made sauces. Arlen’s also a fried sandwich as well. “It’s quick and easy, but also as a fun choice and a home meal replacement. With innovation and flavors, we wanted to make that our niche and examine some things we thought we could do better. I think it will be a continuing segment for us,” Kornick adds. Business partner David Morton adds, “It’s such a broad category…It’s a huge frontier for us to play in, and we see a lot of fun things coming out of that brand. We also see Alren’s as an interesting prospect for a franchise…by virtue of its simplicity.”

Steven Redzikowski and Bryan Dayton, executive chef and beverage director, respectively, of upscale operations Oak at Fourteenth (Boulder, CO) and Acorn (Denver) just launchedBrider, a fast-casual rotisserie concept in Denver. Brider (pronounced bree-day, the French term for tying meat, as you would before roasting) seeks to  “bring a level of authenticity to the fast casual space,” says Redzikowski. “The concept uses a state-of-the-art imported Rotisol oven for its signature dishes including Rotisserie Roasted Chicken Bahn Mi with pate aioli, pickled carrots and cucumbers, and Thai herbs; and Rotisserie Roasted Lamb Leg. The concept serves alcohol including signature cocktails, as well as kombucha and nitro-tap coffee.