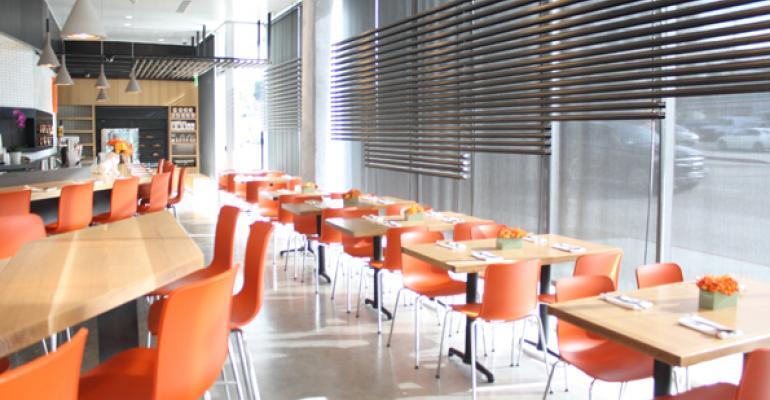 With a new restaurant, Hans Rockenwagner bakes on

Hans Rockenwagner has morphed into the chef’s baker in Los Angeles, where he landed as a chef three decades ago. His 13,000-square-foot bakery supplies breads, rolls and pastries to some of the top eateries in town as well as Whole Foods and local upscale markets. Known for his fine dining restaurant Rockenwagner’s, this year he debuted the more casual Café Rockwagner, in L.A.’s Brentwood neighborhood, with a menu featuring seasonal bistro dishes, pastries and desserts. He also owns 3 bakery-themed cafes in the area. We recently talked with him about baking and shifts in dining-out habits.

I started the bakery in 1991. We couldn’t find the types of bread we needed for the food we were doing at Rockenwagner, so we started a bakery in a corner of the restaurant, and little by little other people starting asking for the product. Ultimately we decided to take the bakery out of the restaurant, because flour and oil don’t mix, and in 2004 we moved into a small production facility.

We also saw the writing on the wall for high-end restaurants and in 2004 we decided to sell Rockenwagner. Three years later we opened a small café, 3 Square Café, in Venice. We wanted it to be very neighborhood-oriented, user-friendly and nonintimidating. We would have breakfast, salads and sandwiches for lunch and upscale dinner fare. It was very successful, thanks to being on a busy street that now is one of the hippest streets in the U.S. Then we opened a Rockenwagner Bakery in Santa Monica, with grab-and-go salads, sandwiches, pastries and coffee in the morning—just breakfast and lunch. A couple of years ago we outgrew the original production facility and moved into a 13,000-square-foot bakery in L.A. We covered the old production space into another Rockenwagner Bakery breakfast-lunch concept. Earlier this year we opened Café Rockenwagner, which is a full-scale restaurant.

RH: Do you miss fine dining?

Rockenwagner: To be honest, if you do fine dining, and especially if you put your name on it, you have to be there. There is no way around it. I started my apprenticeship in 1979, so from then until 2004, I worked every day in the kitchen—every holiday, every New Year’s Eve, every one of my kids’ birthday—and that just wears on you. After so many years you kind of need something else in life. I also saw how people didn’t want to spend three-four hours in a restaurant anymore because time has become so precious. Customers were getting more antsy and were looking for less of, for lack of a better word, an ordeal. They were looking for more fun wanted three-four dishes instead of a succession of eight to nine plates. I saw that as my cue to move in a different direction.

In hindsight it was the best thing I have ever done. I am tremendously proud of what I did in the first 23 years of owning and operating restaurants. But I have renewed energy doing what I do now. We are still producing high-end products, but not that precious thing we were doing.

Challenges of operating in L.A.

The restaurants have become an integral part of the brand, because as we open them they become the face of the brand. We don’t expect to grow at a super fast pace, but I could easily see one new retail location each year. We are self-financed—we don’t have any outside money—so this suits us fine.

RH: What kind of challenges do you face as a restaurant operator and a food producer in L.A.?

Rockenwagner: Staffing is the single biggest issue. It has always been and continues to be true. We need to have more institutions like the Culinary Institute of America or Cornell that educate young talent and give them the foundation and understanding of what they are getting into.

Also, regulations are getting more and more difficult. The whole HACCP system is very cumbersome, but very necessary once you get into manufacturing. There are so many aspects to the baking business that I have to learn on a daily basis.

RH: What are the biggest changes you’ve seen in restaurants since coming to the U.S.?

Rockenwagner: The biggest change is the farm-to-table movement, which has really taken off big time. There is so much young, raw talent out there. Chefs are not tied to some of the same things we were tied to—they don’t have to work for Wolfgang Puck or Joachim Splichal or Daniel Boulud. They are forging their own way from things that once were standard. At its best it’s new, different and exciting—and that’s fantastic. We work with a lot of these chefs, who call and ask for something different. Because we are not a big industrial plant, often we can do it.