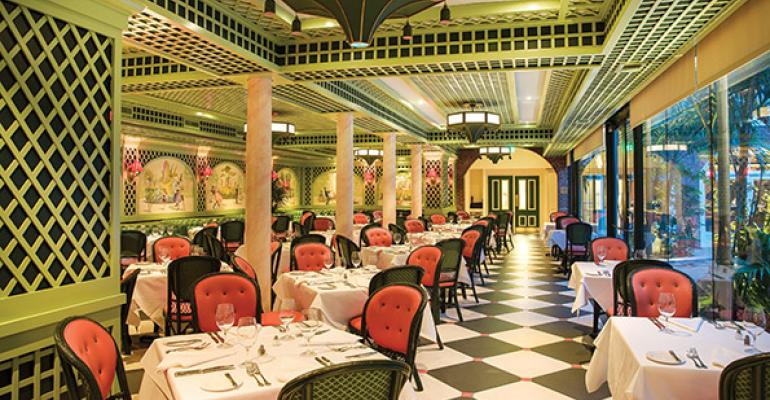 <p>The restaurant&#39;s biggest architectural change was made to the Chanteclair Room, which sits parallel to and overlooking the courtyard patio.</p>
Trends>New Restaurant Concepts

The legendary Brennan&rsquo;s restaurant, a victim of hard times, has reclaimed its past glory in New Orleans. &bull; See more New Restaurant Concepts

Ralph Brennan, a third-generation member of the iconic Brennan family of New Orleans, can’t stop grinning with pride as he walks through historic Brennan’s restaurant. It’s the day before Halloween and legions of misfits will soon pack Bourbon Street to party with reckless abandon. For many of them, the upscale sophistication of Brennan’s on nearby Royal Street isn’t within their realm. Even if it was, this long-time island of tranquility in a sea of French Quarter madness is anything but tranquil today as dozens of carpenters, painters and craftsmen work frantically to complete the renovation of Ralph Brennan’s dream.

Brennan knows every nook and cranny of this place, which his uncle Owen opened in 1956. He grew up in Brennan’s and worked there in high school as a prep cook. “As long as I didn’t get in the way (as a small kid), I had free rein in the kitchen, the bar and the storeroom. I was fascinated by it all,” he says. “During Mardi Gras, we’d watch the parade from the Royal Street balcony and do our homework in between.”

At the time, he had no idea how important Brennan’s would become in the restaurant world. The very idea for brunch served with alcoholic beverages was created by Owen to compete with his frenemy Count Arnaud, who ran the nearby Arnaud’s restaurant. Add to that Brennan’s chef Paul Blange, who is credited with the creation of two menu masterpieces—Eggs Hussarde and Bananas Foster—and it’s easy to see why Ralph, who purchased the building with business partner Terry White, is as excited as a kid meeting Mickey Mouse at Disneyland. He’s in the presence of something iconic and he knows it.

Unfortunately, the years have not been kind to this instantly recognizable structure with the salmon-colored façade. Time took its toll on the building and on other members of the Brennan clan, a sect of a divided family that operated the restaurant until 2013, when it closed. It was a family crown jewel that Ralph would not let fall into the hands of an outsider. Buying and reclaiming history is not a cheap proposition, however.

Brennan won’t say how much he and White spent to reclaim the past glory of Brennan’s, but newspaper reports put the cost at around $20 million. “We spared no expense,” said Brennan, as he stepped over building materials scattered on the floor of the The Roost Bar, one of several dining areas in a space that formerly served as a bank and home to a former state attorney general.

This legendary 375-seat restaurant, known for its French and Creole cuisine, couldn’t be in better hands. Brennan is a highly skilled restaurateur who has operated excellent establishments for decades. He’s the founder and president of Ralph Brennan Restaurant Group, which runs seven restaurants, including this latest, which opened just weeks after Halloween. He’s also a past president and chairman of the National Restaurant Association and a Culinary Institute of America trustee. The man lives and breathes restaurants and is renown for his focus on hospitality. It’s one of the reasons Restaurant Hospitality last year named his company to our list of the 25 Coolest Multi-Concept Companies in the Land.

Nevertheless, the pressure is on. Generations of New Orleans families have celebrated at Brennan’s and Ralph and his crew have a lot to live up to. As he said, though, he and White have spared no expense. They hired designer Richard Keith Langham, a New York-based southern gentleman who embraced the landmark’s original sensibility, which is decidedly upscale, charming and genteel.

The color of Brennan’s signature pink stucco façade surfaces as accents in a number of the restaurant’s 10 dining rooms. The color (think tomato cream sauce) gives pause to Brennan, who wonders out loud if it might be a bit too feminine for some male customers. Yes, this is no place for a boys’ night out. But at a time when Americans have wholeheartedly embraced casual restaurants to the detriment of upscale dining, it’s refreshing to see one that is unabashedly posh.

“As other cities have lost their traditional restaurants as the result of changes in lifestyle, dining, time constraints and a fast-paced world, New Orleans has proudly clung to and supported establishments that stay true to the art of fine dining,” says Brennan.

He’s right, and maybe Brennan’s would not thrive in other towns, but New Orleans—the home of jazz, the Mardi Gras and cocktail culture, is no ordinary town. And Brennan’s is no ordinary restaurant. Designer Langham did a terrific job of making the structure more functional by eliminating several small dining spaces and combining them into larger spaces.

“My intent was to create rooms that recognized the past; full of old-fashioned Southern flourish and, of course, flavored with many European influences,” says Langham.

Inside the new Brennan's

On lovely days, customers may choose to bypass the Chanteclair Room and sit in The Courtyard, a 60-seat outdoor dining room that rests under a variety of trees—palms, jasmine, banana and orange—in massive French planter boxes. A focal point is a fountain that shoots a stream of water into a huge stone urn. Tables here are topped with Portuguese tiles and shaded by big dark green scalloped umbrellas lined with pink and white stripes.

An aviary-inspired 20-seat barroom—The Roost—has its original flagstone floors, which are an extension of The Courtyard patio. A local artist painted a mural on a reverse-gilded mirror with the images of flamingos, ostriches and other exotic birds in an extravagant gilded birdcage. Old-fashioned two-blade ceiling fans provide a breeze.

Another dining area, the Vieux Carré Dining Room, sits along Royal Street. With the renovation came bay windows that allow guests to observe the energy outside. The design here is a tropical fantasy with mango plaster walls and vibrant Cuban cement tile floors. A grand chandelier and upholstered Parisian restaurant chairs are a nod to the French style of this 35-seat room.

Upstairs are a series of private dining areas, including the King’s Room, the Queen’s Room, the Pineapple Room, the Morphy Room and the Porch Dining Room. Think chandeliers and velvet chairs. The one decidedly masculine room, the Morphy Room, looks like an English study with a chess table. The room is named for Paul Morphy, a world-class chess master and the son of a former state attorney general. He lived in the house until 1884, when he died.

Also decidedly masculine is the Wine Room, located in the cellar. It retains its original arches made of handmade brick and rough timber beams. Sixteen tall-back leather chairs sit at a massive table milled from a single cypress tree. Beverage director Drew Brandwein oversees a 7,500-bottle collection. His goal is to make Brennan’s the best Champagne house in the South.

Heading the kitchen is Slade Rushing, who worked at top restaurants in San Francisco (Jardiniere, Rubicon) and New York (March, Fleur de Sel, Jack’s Luxury Oyster Bar). Brennan tapped him to take charge of Brennan’s kitchen and, more specifically, to create a healthful approach to New Orleans cooking while maintaining traditional flavor. Brennan has long insisted that a light and simple grilled fish be available on the menu of all his restaurants.

“Traditional New Orleans food is so unique that I don’t have to do much but lighten the sauces,” says Rushing. “We accomplish that through technique and execution while still retaining the flavors.”

After a look around, it’s no wonder Brennan couldn’t stop grinning as he walked through the space weeks before opening. He and White have spent a fortune to bring this iconic building back to life, but he understood the historical importance of this restaurant, not just to his family, but to America.