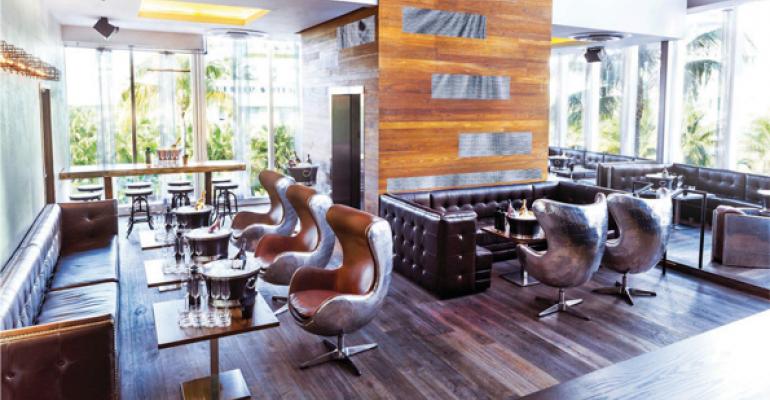 <p>1826 Restaurant &amp; Lounge has plenty of flash to spare, but without chef Danny Grant in the kitchen, it would be just another Miami Beach pretty face.</p>
Trends>New Restaurant Concepts

Miami Beach's 1826 Modern is no throwback

When the folks behind 1826 Restaurant and Lounge opened several months back, they left little to chance. In the kitchen they put Chef Danny Grant, a 2012 Food & Wine Best New Chef who earned two Michelin stars for his cooking in Chicago. In the dining room, they’ve installed sommelier Zach Gossard, who handled the wine programs at Scarpetta and Alfred Portale’s Gotham Steak, both in the Fountainblau.

To wrap all this talent in a bow, designer Samy Chams was brought in to create a chic industrial design within the 8,200 square foot, multi-level space. His portfolio includes designs at the VOP Room in St. Tropez, Baoli in Cannes and L’Arc Restaurant-Bar & Club in Paris.

Quarterbacking the team is Darragh Moore as director of operations. He, too, worked at Portale’s Gotham Steak (as g.m.) and previously with famed David Burke at two of his restaurants. In essence, 1826 Restaurant & Lounge (the address on Collins Ave.) has itself a dream team, and it shows in every inch of the space.

First and foremost, Gant’s food shows remarkable sophistication for a guy his age (he’s 32, looks 22). The chef is classically French trained and his dishes are beyond elegant. Credit, in part, goes to his cooking at RIA restaurant at the Waldorf Astoria in Chicago. The clientele there is well-heeled, to say the least, and Gant demonstrated that he can do upscale cooking with the best of them.

Credit also goes to acclaimed chef Bruce Sherman, who mentored Grant at Chicago’s North Pond, where the cooking is as intellectually sophisticated as anywhere, but firmly grounded in its farm-to-table approach. Credit, of course, goes to Grant himself, who instead of leaving the pastry side of the business to others, trained at The French Pastry School to round out his skills.

Grant is deadly serious about his cooking, but at 1826 he’s like a kid driving a convertible. He’s been given the keys to the car and his enthusiasm for cruising in Miami Beach is infectious. He beems as he walks out of the kitchen with food that is highly refined, yet playful. You’ll smile, too, because each of his dishes are a work of edible art.

The chef has smartly divided his menu at 1826 into three sections—The Harvest, The Hook and The Hunt. In the Harvest section you’ll find items like a Leek Croquette (with Petit Basque [a sheep’s milk cheese], potato and black truffle) $10; Sweet Corn & Garganelli Pasta (with summer squash, black truffle and spring onions) $22; and Wild Mushroom Hen Egg Cocotte (with garbanzo beans, panisse and vin jaune emulsion) $16.

More on the menu

Backing Grant up in the pastry department is Soraya Caraccioli, a talented chef who toiled, among other places, at the acclaimed Setai Restaurant within the Setai Hotel on South Beach. Her dessert menu is short and sweet and includes items such as Coconut Gelee (with coffee, bourbon and smoked coconut fuelletine) $12; Yuzu Chiboust (with raspberry sorbet, grapefruit and tarragon) $12; and Dark Chocolate Cremeux (with banana, maldon sea salt and caramel ice cream) $10.

As astonishingly beautiful and tasty the food is, the décor equal’s the kitchen’s finesse. What makes 1826 stand out from the crowd is the metamorphosis that takes place during the evening. After usual dinner hours, it’s focus shifts from the dining room to an ultra-lounge on the third and fourth levels. Imagine P. Diddy, Puff Daddy or whatever he’s now calling himself, having bottle service on this level.

While most customers aren’t A-list celebrities, the option is open to them to not leave the restaurant after dinner, but rather take an elevator to the next levels that serve as a hideout of sorts. Or, if you wish, skip dinner and head to 1826 late at night. Chef Grant has created an after-hours menu that pairs beautifully with cocktails.

From the outside on Collins Avenue, passersby gets hints of what’s taking place inside through 1826’s sea blue all-glass exterior. Inside, the surroundings feature brushed concrete, warm woods and bronze accents. A long, glossy bar serves as a focal point for the lounge.

1826 Restaurant & Lounge has upped the ante in South Beach. It eschews the flamboyant pastels seen all over the beach in favor of a more big-city vibe that one might find in New York City. With this kind of attitude and a dream team to back it up, 1826 is bringing upscale Miami vice back with a vengeance.