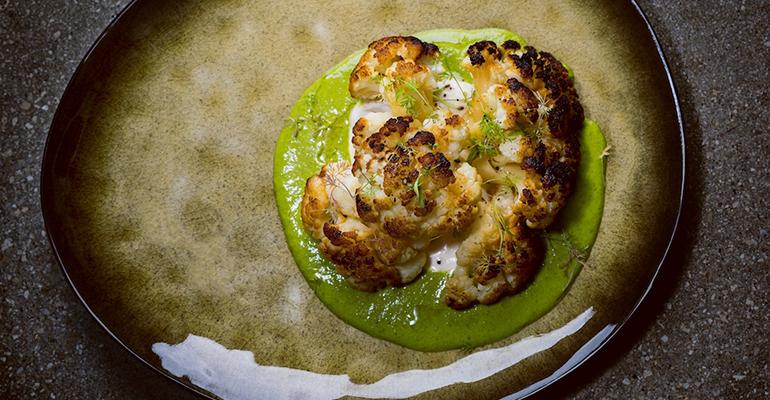 Kyu has been a hot ticket in Miami ever since it opened last February.

The restaurant in the trendy Wynwood neighborhood celebrates East Asian and central Texas barbecue traditions, without neglecting the vegetables. It has drawn enthusiastic crowds and garnered numerous accolades, including being named the best restaurant in Florida by Time magazine this year.

Michael Lewis, a Baltimore native who cut his teeth in some of New York’s finest restaurants, runs the kitchen. “I really grew up in the kitchens of New York,” said Lewis, whose first restaurant job was an unpaid internship at seafood landmark Le Bernardin, where he spent about eight months.

“Then, once I couldn’t afford to not get paid anymore, I took a job at Bouley Bakery,” he said.

He helped open the fine-dining restaurant, as well as David Bouley’s next masterpiece, Danube.

But Lewis’s next step brought him closer to Southeast Asia in particular, as he came under the wing of Jean-Georges Vongerichten. For around eight years, Lewis worked for the French chef who popularized Asian-fusion cuisine in New York. Lewis ultimately reached the level of chef de cuisine of Jean-Georges restaurant.

“I still talk to Jean-Georges on a weekly or monthly basis, and still consider him a friend, but I realized along the way that I wasn’t eating at three-Michelin-star, 16-course tasting-menu restaurants,” Lewis said.

Instead, he was eating at restaurants where he and his friends could share many tasty dishes, where the food was “simpler [and] a little bit less refined on the service.” One of those restaurants was Zuma, a modern Japanese chain based in London. Lewis worked for the chain for six years, first in London and then in Miami, where Lewis settled down and bought a house and a smoker to play with.

“I decided I really like it,” he said. “You can’t work with someone like Eric Ripert or David Bouley or Jean-Georges and not have a passion for cooking technique. … One of the only true American techniques is the central Texas style of slow, low barbecue.”

Eventually, Japanese grilled meat, or yakiniku, and Texas barbecue, became the inspiration for Kyu — pronounced like the last syllable of the word “barbecue” — which Lewis opened with general manager Steven Haigh, whom he met at Zuma.

At Kyu, Lewis often applies the flavors of Northeast Asia — Japan and Korea — to Texas barbecue technique. The low-and-slow smoked brisket has Korean sesame oil, and the pepper is black shichimi pepper with citrus and chile notes. The brisket is served with Bibb lettuce wraps, cilantro, shiso, bean sprouts and condiments such as red onions pickled with ginger and ponzu; cucumbers pickled with yuzu, chile, wasabi and salt; and three different barbecue sauces.

The sauces are a sweet-and-sour, vinegar-based yakinuku sauce, which Lewis likened to South Carolina barbecue; sweet-and-spicy Korean gochujang-based sauce, not unlike the sugar-and-ketchup sauces of Oklahoma and Texas barbecue; and a habanero sauce that Lewis said is “extremely spicy, but also very floral and super, super light and refreshing.

Light and refreshing are important qualities for Lewis. Fish and vegetables balance out the meat portion of his menu. “The bulk of our customers really do focus on the lighter and brighter side of things, and then for a really nice finish to the meal they have a big piece of meat,” Lewis said.

That could be brisket or beef short ribs. The ribs are marinated in sugar, soy, garlic and chile, like Korean kalbi, but kalbi is sliced thinly and grilled quickly, often tableside. Lewis’s short ribs are smoked for 10 to 12 hours, marrying the flavor of kalbi with the texture and smoke of American barbecue.

“That dish is pretty impressive on the plate and super-interesting in flavor,” Lewis said.

One of the best sellers is whole cauliflower roasted in the oven, finished on the grill and served with a goat cheese and shiso-green chile vinaigrette. Roasted barbecue carrots with pink peppercorn and tofu are also on the menu.

During tomato season, which in Florida is November and December, Lewis serves heirloom tomatoes dressed simply with sliced red onion, sea salt and cracked black pepper. Instead of adding basil, like a Caprese salad, he uses the Japanese herb shiso and dresses the whole dish in an ice wine vinegar called Minus8.

“It has an amazing balance of sweet and sour to it that I think kind of takes the dish to the next level,” he said.

Also on the menu are new takes on sashimi, such as tuna tataki with roasted peppers, fish sauce and ponzu, and sliced hamachi with Thai basil, mint, chervil and chiles. The mint keeps the latter dish “interesting,” while the basil and chervil “kind of keep it grounded,” Lewis said.

“The licorice notes [in the chervil] play into a kind of Chinese five spice,” he said.

Kyu also serves a style of crunchy sushi, made by making traditional sushi rice, pressing it, chilling it until it gets firm, and cutting it into sushi-sized pieces that are quickly fried until crispy on the outside and light, fluffy and vinegary on the inside. Toppings include tuna tartare with chipotle, or hamachi tartare with wasabi.

For fish, Lewis does a fresh take on Nobu- and Zuma-style dishes like miso-marinated black cod. But he uses local snapper instead, which he cooks with brown butter and white miso.

“It’s just a super-fresh piece of fish with a similar flavor profile, but you have that lovely, light, flaky freshness from actual fresh fish, not a frozen piece of black cod that you’ve had to marinate for 10 days,” he said.

Although New York City is Lewis’s spiritual home in many senses, he makes a nod to his hometown with crab buns. “Being from Baltimore, it would be rude not to put some crab in there,” he said.

The buns are inspired by Shanghai-style charsiu pork dumplings, but with soft-shell crab instead. Lewis dresses them with a spicy lime aïoli with fermented chile and citrus, yuzu-scented pickles and shiso.

“It’s hot and cold and crispy and crunchy and light and bright and herby,” he said.

Despite the national accolades, Lewis said he wants Kyu to remain “a local restaurant for locals.”

“We’re just a little neighborhood restaurant … that’s trying to do something a little bit better than maybe the other guy,” he said.