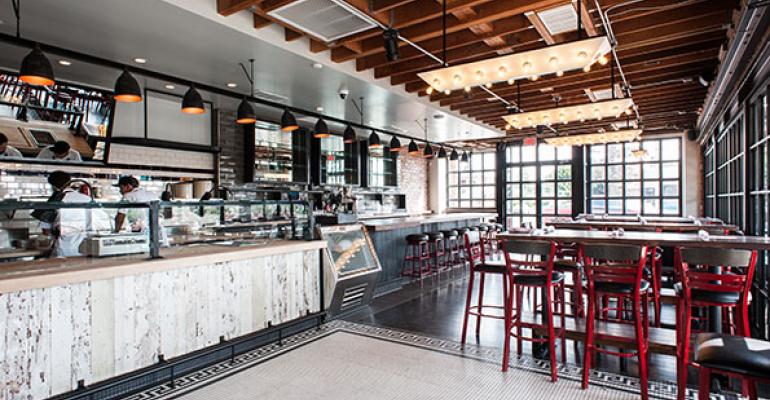 A growing number of Americans say they are eating meat less often. But when they do partake of the flesh, they want it to be really good.

That trend is giving rise to a growing number of carnivore-focused concepts, where the meat is thoughtfully sourced and elevated to new levels. One example is Maple Block Meat Co., which opened for lunch recently in L.A. and will soon be open for dinner.

The menu taps the traditions of American barbecue with all meat butchered, seasoned and smoked on the premises.

The meat is enhanced with various sauce options, and sides include classic slaw made with Duke’s mayo; or charred rapini and smoked ranch beans seasoned with meat drippings.

Behind the concept is co-creator and partner Daniel Weinstock, who spent five years as sous chef at Spago in Beverly Hills, later working in the corporate offices of Patina Restaurant Group, as well as Panda Restaurant Group. Weinstock is partnered with restaurateur and nightclub operator Mike Garrett.

Here’s what Weinstock had to say about Maple Block Meat Co.

Why is butchering meat in house so important to a concept like this?

Weinstock: Butchering in-house allows us to maximize the use of the entire product and offer items that most other barbecue restaurants cannot do such as bone-in pork belly.

Will the barbecue at Maple Block reflect regional influences, or are you trying to build a concept that is “nondenominational?”

Weinstock: We are not looking to focus on one specific region of barbecue. To us, it’s most important to respect the tradition of smoking the meat without overcomplicating it.

We play around with acidity in a variety of ways, but we do that because it’s how we like to cook and eat, not because of any one region. Adam, Mike and I are all influenced by what we have been exposed to growing up and exploring food cultures, so there is no doubt that some of these influences surface in our food.

L.A. seems awash in higher-end barbecue concepts by fine-dining chefs. What’s driving this trend and how will Maple Block stand out?

Weinstock: Barbecue is one of the oldest (hundreds of years) techniques in the Americas, so it’s always been in style. And the time has always been right for good food, good cooking and a good team. For us, it was really about our timing and the pieces of the puzzle coming together for our team and the location.

Clearly this is a concept for carnivores, but anything for vegetarians/vegans?

Weinstock: Absolutely!  We make a great cauliflower steak that’s grilled over wood and charcoal. (It has) really satisfying textures—soft inside with a good crispy char on the outside.  We serve that with a little celery-leaf salsa verde that’s heavy on the acid. I love that dish.

Where will the restaurant source its meat, and what do you feel is important to your guests?

Weinstock: There are a number of variables we are looking for, from humanely raised animals, breed of the animals, fat vs. protein of the animal and how far away the animal was raised. And at the end of the day, it’s about our relationships with the ranchers and farmers.

How are you presenting the whole bone-in prime rib?

Weinstock: We put the whole rib down in the middle of the guests’ table with a few sides and sauces—basically it’s how we would serve it home with friends and family. From there, we just let them have at it. Once everything is down, all that’s left is to see who wants another beer or glass of wine.