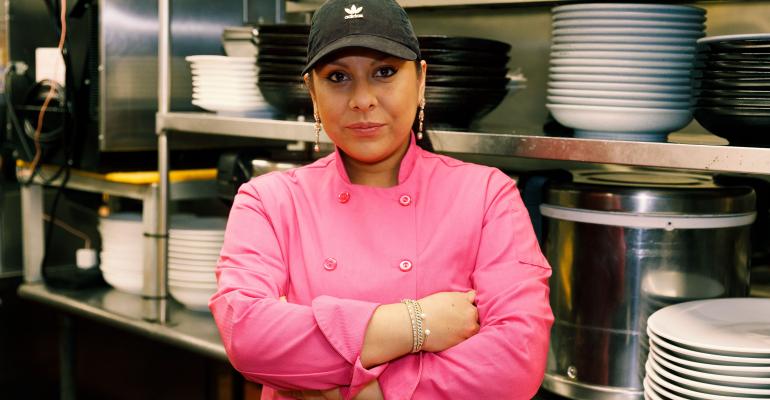 Macarena Ludena brings Cora Cora to the next generation

After taking the helm of her parents’ Peruvian restaurant during the pandemic, operator focuses on continuity

At the West Hartford, Conn., Peruvian restaurant Cora Cora, Macarena Ludena tries to teach her staff to cook with patience and passion.

It’s a lesson she learned from her parents, who opened the restaurant in 2011. Ludena grew up working in the restaurant, attending culinary school between shifts.

“At first it was difficult, because I was working with a lot of men,” Ludena said. “I was the only woman working inside the kitchen, so they also looked at me differently because I was the owners' daughter.”

During the pandemic, Ludena took over operation of the restaurant. She emphasizes continuity with her parents’ approach to running Cora Cora. Although she has tweaked some recipes, the menu has not changed. The most important change Ludena made, she claims, was to standardize the recipes in order to facilitate teaching them to the other cooks.

“Now my focus is putting everything on measure, because I need to teach someone else to do the stuff, and it has to stay the same. So I think it will help at the restaurant that we have continuity, or giving the same flavor every day,” Ludena said. “Because it's not my mom there anymore. I'm there. I’ve got to make sure everything is still tasting good, having the same flavors that my mom taught me.”

The 3,000-square-foot, 120-seat restaurant serves a wide range of traditional Peruvian dishes, with an emphasis on the coastal cuisine. Entrées include fish ceviche — fish marinated in lime juice and ají limo, with choclo, boiled sweet potato and potato — and lomo saltado, which consists of strips of tenderloin stir-fry with soy sauce, ají amarillo, onions, tomatoes and cilantro on top of hand-cut fingerling potatoes and a side of white rice. Most appetizers cost around $12, and entrées range from about $18 to $40.

In February, the restaurant was a semifinalist for Outstanding Restaurant and Best Chef: Northeast by the James Beard Foundation.

Ludena credits the skills she learned from her parents — and the fact that the restaurant is in a location that was a McDonald’s previously. The drive-thru window was intact and was put to good use during the pandemic.

“It was a hit,” Ludena said. “Every day we had a lot of customers coming in. We loved that. People loved the way it was. It was easy and faster.”

Much of the menu corresponds to what Ludena grew up eating in Coracora, Peru, the namesake of the restaurant. She has particularly fond memories of eating lomo saltado, a luxury reserved for special occasions in the small town. Her mother would go to a nearby farm and pick out a cow, which was then brought to their house and slaughtered. According to Ludena, the freshness of the meat and the care with which the cows were raised noticeably improved the flavor.

“I have a memory of the flavor of the lomo saltado in my mind. When here, I changed the recipe that my mother left a little bit: what the sauce is, the combination. It kind of reminds me of the flavor that I was eating as a child,” Ludena said. “Lomo saltado is my favorite dish. I would eat lomo saltado every day if possible.”

Of course, Cora Cora does not acquire its meat the same way one would in Coracora, Peru. But Ludena does take care to purchase high-quality tenderloin, and all cuts are made in-house.

Cora Cora now employs a staff of about 16, and indoor and outdoor dining are once again available. Indoor diners will be greeted by the Cora Llama, a stuffed llama Ludena’s mother brought back from a trip to Peru years ago.

Ludena looks forward to the possibility of creating more jobs for Connecticut’s Peruvian community. She hopes that as Cora Cora grows, she will be able to offer high enough pay that staff won’t need to work second and third jobs.

Ludena does not currently plan to open a second Cora Cora location, but she does intend to purchase a property and relocate the restaurant there. The former McDonald’s is a rental.

“My mother's dream is to open our own business, our own building to make our own space, to feel like home…. I think that for my sister, for me, that's my goal: to make my mother's dream restaurant,” Ludena said